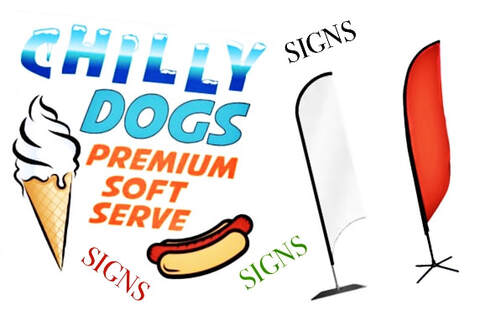 Only weeks after purchasing feather flag banners permitted by City of Bandera ordinance, local business owners Jane and Jerry Russe were told the rules had changed. That particular kind of sign was now banned, and they were required to remove them. What confused them was why other businesses were not. ​
In response, Jane Russe did some homework. She submitted several open records requests to review the city’s sign ordinance and enforcement history. Although all of the billowy feather flags had been taken down, she said she discovered many businesses in violation of other parts of the city’s ordinance, yet continue to be inexplicably allowed to keep their signs up.
“We are concerned about inconsistencies regarding the sign ordinance,” she said. “Out of 92 permits issued since 2018, we found 40 issues…we found 45 businesses in violation while driving through town.”
Russe said she feels singled out and discriminated against. She said she attempted to discuss the matter with the city, to no avail. Further, she said she has pointed out what seems like favoritism and selective enforcement, as well as those businesses that remain in violation of the updated ordinance.
“There is no favoritism to anyone as far as I know,” City Administrator J. Horry said. “We’re trying to work with people and their businesses to make it work for everyone.”
Horry said the sign ordinance was revised about two months ago, and in the process things were changed that people were not aware of. He said council members have gone through each item of the ordinance during workshops in an effort to clarify and simplify the new language, which he admitted was confusing.
“Our code enforcement officer has given breaks to certain businesses and people,” Horry said, blaming the gray areas of the revised ordinance which he said led to misunderstandings. “There was unclear wording.”
Horry added some business owners have “pushed the limits” of the ordinance.
“There are some businesses that put up signs or banners that are in violation without knowing,” Horry said. “We’re trying to get the word out to make citizens more aware of what’s going on. We’re not saying they’re doing it intentionally to break a rule, it’s just lack of knowledge.”
Russe, who with her husband has owned Riverside RV for 16 years and Chilly Dogs, behind China Bowl on Main Street, for about seven months, said while it’s upsetting that they wasted money on signs - each costs about $150 - their main focus is the enforcement.
“It should be cut and dry,” Russe said. “How is it decided who gets a break?”
To see the city’s codes and ordinances, go to www.cityofbandera.org/2166/City-Codes-Ordinances.
The Bandera Prophet is grounded on the premise that relevant news delivery is ever-evolving. Founded by newspaper veterans, the Prophet delivers up-to-date information by writers and photographers who combined have 50-plus years of experience in the field and newsroom. Always free to readers, the Prophet is published on multiple platforms, and shared within the online community to more than 150,000 people. No paywalls and no paid subscriptions make news and feature stories immediately available with one click of a button or one swipe on a keypad.
​
All content copyright property of The Bandera Prophet