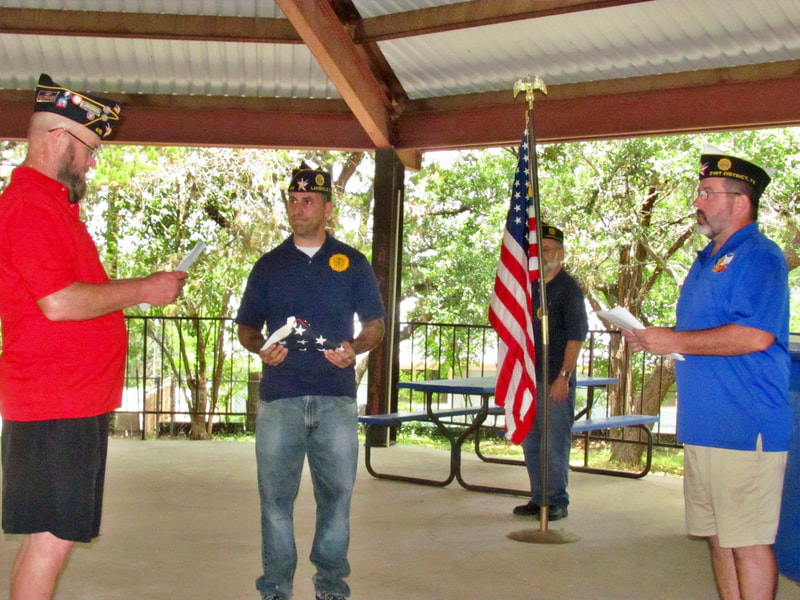 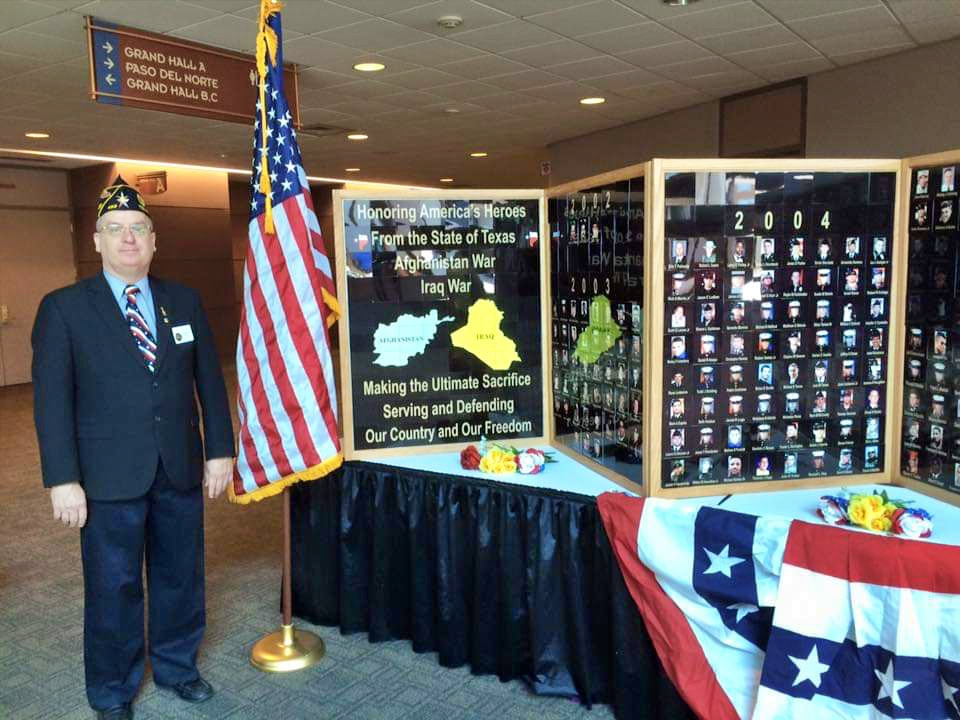 Veteran Jeff Perkins with the Texas Fallen Heroes Memorial Wall that he created to honor his fallen comrades, who gave lives in various conflicts over the last 17 years. The Wall will be on display July 4 at the American Legion Hall in Lakehills. Courtesy Photo

This year marks the 100th anniversary of the American Legion and the Lakehills James F. Pearson Post 410 has been gearing up to celebrate this milestone and honor all our veterans.
The annual Flag Retirement Ceremony was the latest event, held on Saturday, June 15 at the Legion Hall. It was held in the gazebo outside, where the ceremony took place in the shade, and was attended by veterans and their families and friends. After the ceremony, the old, worn flags were respectfully retired from service. A Dart Tournament followed the flag retirement inside the Hall.
Next up is the annual Fourth of July Parade, with a special attraction followed by a barbecue, complete with an auction and a raffle.
Right now, the Legion Post 410 is recruiting participants for the parade. They invite the public to join in the fun. Participants are encouraged to get their trailers, cars, golf carts or motorcycles and “come on down.”
The Legion will award trophies in five categories: Most Patriotic, Showmanship, Originality, Youth (under 18 years of age) and Most Patriotic Vehicle.
For the parade, participants must sign in and line up by 9:30 a.m. at St. Victor’s Church. The judging will take place between 10 and 10:30 a.m. and the parade will move out at 11 a.m.
The barbecue following the parade will begin serving at noon and each plate will include  chicken or sausage, potato salad, beans and a drink for $10 each plate. Desserts will be available for a small fee.
Live music will be provided by the River City Wranglers starting at noon.
The special attraction to the 4th of July event is the Texas Fallen Heroes Memorial Wall, which will be on the grounds of the Legion Hall for that one day only. The wall is about three and a half feet tall and almost 40 feet long. On the wall are the names of all Texas veterans who have given the ultimate sacrifice since the year 2002.
The Wall is the creation of Jeff Perkins, a veteran and a member of the American Legion Department of Texas, based in Austin. It took him four and a half months to research and make and it was all at his own expense. It is his way of honoring his fallen comrades.
To join the parade and learn more about Independence Day events, call 830-751-3711 or 830-212-9030.
The anniversary year will culminate with a big Anniversary Dinner and Member Dinner on the actual anniversary date of Saturday, Sept. 14, in the Legion Hall. Plans are still in the works and details are forthcoming.
The American Legion is the nation’s largest veteran organization and it belongs to all veterans and their families. Their four-point mission is to serve and advocate for veterans and their families, support a strong national defense, provide patriotic youth programs giving young people a foundation for success, and promote Americanism by building community pride in our national identity.
In support of the national mission, the Lakehills Post 410 is active in Bandera County and especially in the area of Lakehills and Pipe Creek. In 2018, they sponsored a Cub Scout Pack and a Little League team. They sent two young men to Boys State, earning scholarships. Some of the members built a ramp for a disabled veteran. The Post held the annual 4th of July parade and barbecue. They held a Christmas dinner for the community, as they do each year. They also held Las Vegas Nite and two Chili Cook-Offs.
All the funds raised from Post 410 events go to local charities, such as Boys & Girls Club, Silver Sage, Arthur Nagel Clinic, Medina Lake Betterment Association, Medina Lake Volunteer Fire Department, Little League, Cub Scouts, Boy Scouts, school supplies for Hill Country Elementary students and sports equipment for the Pipe Creek Christian School.
Many Post 410 members serve Meals on Wheels, are volunteer fire fighters, work with the Food Bank, volunteer with the MLBA and serve in local churches.
The Lakehills Post 410 Hall, 147 26th St., Lakehills, is open to the public from Friday through Tuesday each week. The hours are from 3-9 p.m. They provide a play ground for the kiddos, dart boards, pool table, TV and music. On Tuesdays, starting at 5 p.m., hamburgers are available for $5. On Fridays, also beginning at 5 p.m., dinner plates will be served for $8 each and will include entree, salad and dessert. The funds from the meals go to the Legion and support the community events.
To learn more, contact Post 410 at 830-751-3711 or americanlegion410@att.net. Check out their website at alpost410.com or find them on Facebook under American Legion Post 410. ​
The Bandera Prophet is grounded on the premise that relevant news delivery is ever-evolving. Founded by newspaper veterans, the Prophet delivers up-to-date information by writers and photographers who combined have 50-plus years of experience in the field and newsroom. Always free to readers, the Prophet is published on multiple platforms, and shared within the online community to more than 150,000 people. No paywalls and no paid subscriptions make news and feature stories immediately available with one click of a button or one swipe on a keypad.
​
All content copyright property of The Bandera Prophet