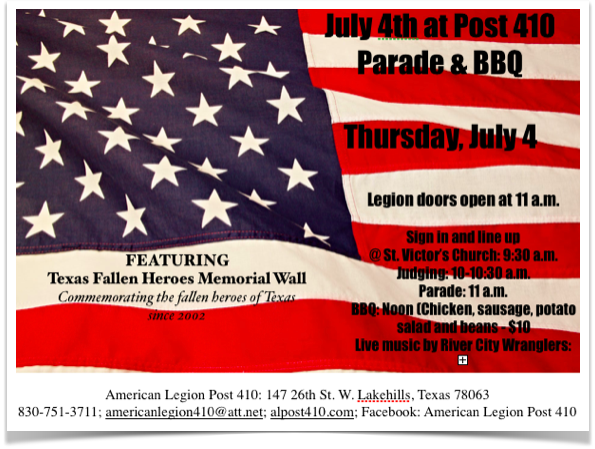 A few Independence Day celebrations are planned throughout Bandera County for tomorrow - some old, some new - all showing the community’s red, white and blue.
In Bandera City Park, animal lovers will gather early Thursday morning for the annual Pet Parade. From 8 a.m. to noon, participants and observers are allowed in the park for free. A red Pet Parade parking permit will be issued to everyone who enters the park.
Registration to enter the pet costume contest begins at 9 a.m. and judging begins at 9:30 a.m. Categories judged include: Star Spangled Honors, Best of the Wild West, Most Look-A-Like, Most Original, Favorite Storybook Character, Best of Show and Most Creative.
The Hill Country State Natural Area Junior Rangers Drill Team, led by Carey Reed, will present the colors at the beginning of the parade, which begins at 10 a.m.
In Lakehills, the American Legion Post 410 is hosting a parade, barbecue, auction and raffle. Parade participants need to be in line at St. Victor’s Church by 9:30 a.m. Judging for the Most Patriotic, Showmanship, Originality, Youth (under 18 years old) and Most Patriotic Vehicle will begin at 10 a.m. The parade, with Parade Marshall Ruth Tschirhart, will start at 11 a.m.
Barbecue plates will sell for $10 each at noon, and folks can eat while they enjoy live music by the River City Wranglers. Plates include chicken, sausage, potato salad, beans and a drink. Desserts are extra.
New to this year’s July 4 celebration is the Texas Fallen Heroes Memorial Wall, at the Legion hall for one day only. The 40-foot wall, created by Veteran Jeff Perkins, contains the names of all Texas veterans who died since 2002.
At the close of the day, Kim and Allen Smith will once again launch a fireworks display. An annual tradition in the Pipe Creek and Lakehills community since 1992, the show - set to start after the sun goes down, around 8:45 - 9 p.m. - is best visible from the water in Elm Cove. ​
The Bandera Prophet is grounded on the premise that relevant news delivery is ever-evolving. Founded by newspaper veterans, the Prophet delivers up-to-date information by writers and photographers who combined have 50-plus years of experience in the field and newsroom. Always free to readers, the Prophet is published on multiple platforms, and shared within the online community to more than 150,000 people. No paywalls and no paid subscriptions make news and feature stories immediately available with one click of a button or one swipe on a keypad.
​
All content copyright property of The Bandera Prophet