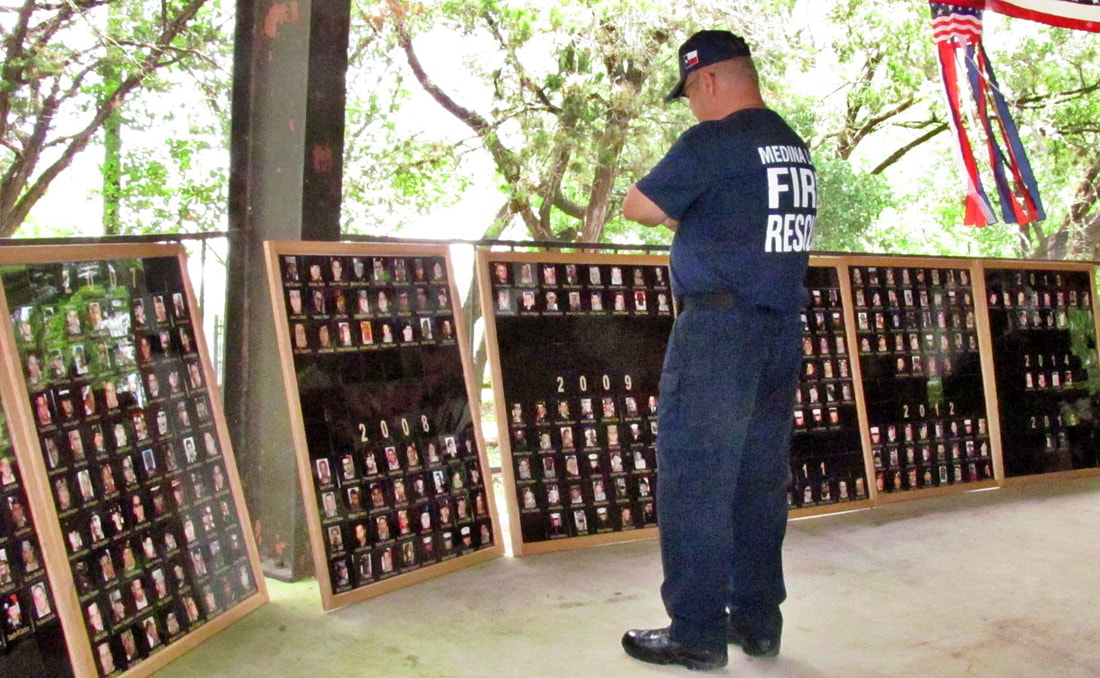 Veteran Miguel Muñiz finds a familiar name and ponders the picture on the Texas Fallen Heroes Memorial Wall during the July 4 event at the Lakehills American Legion Post.

A poignant picture faced me when I walked into the pavilion of the American Legion Post 410 in Lakehills on July 4. I watched as veterans walked the length of the 40-foot Texas Fallen Heroes Memorial Wall looking to find their fallen comrades.
Miguel Muñiz found a familiar name and studied the photograph. James Reynolds found the picture of his great-granddaughter’s father, who was only 20 years old when he perished in Afghanistan.
The wall is the brainchild of the 20-year Coast Guard veteran and native Texan Jeff Perkins. Perkins lives in Rowlett, and is a member of the American Legion Department of Texas, based in Austin.
He said he got the idea from a similar wall for soldiers who were killed in action. However, Perkin’s memorial wall honors those Texans who fell since the terrorist attacks on Sept. 11, 2001, those who gave the ultimate sacrifice in Iraq and Afghanistan.
It took Perkins four-and-a-half months to do the research and compile the names and photos. The wall stands about three-and-a-half feet tall and stretches almost 40 feet long.
He has made two of those walls and travels all over Texas to display them. Perkins drives about 10,000 miles each year to set up the display and, when he can, he stays with one of the walls so he can answer questions. All of the expenses come out of his own pocket; it is a labor of love.
When asked why he wanted to do this, Perkins said, “This wall is for our fallen heroes. Viewing the wall is respecting the fallen heroes who made the ultimate sacrifice.”
It is his way of honoring his fallen comrades.
Perkins is pleased to bring the wall to anyone who wants it. He said several universities ask for it as their students want it. One moving story he relates concerns a woman who found her son’s picture on his wall and she goes every year to see it. For her, it brings back so many memories.
To display the wall at your event, contact the American Legion Department of Texas by calling 512-472-4138. Their website is www.txlegion.org.
The Bandera Prophet is grounded on the premise that relevant news delivery is ever-evolving. Founded by newspaper veterans, the Prophet delivers up-to-date information by writers and photographers who combined have 50-plus years of experience in the field and newsroom. Always free to readers, the Prophet is published on multiple platforms, and shared within the online community to more than 150,000 people. No paywalls and no paid subscriptions make news and feature stories immediately available with one click of a button or one swipe on a keypad.
​
All content copyright property of The Bandera Prophet