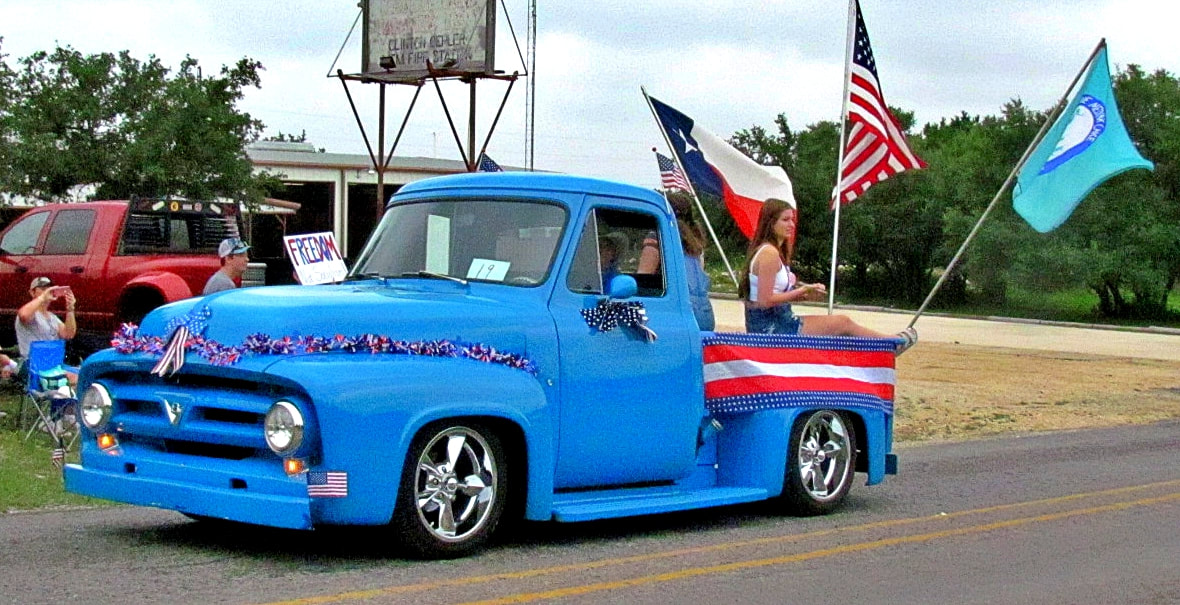 Bruce Koehn drove the Most Patriotic Vehicle with his blue truck with red and white ribbons and flags. 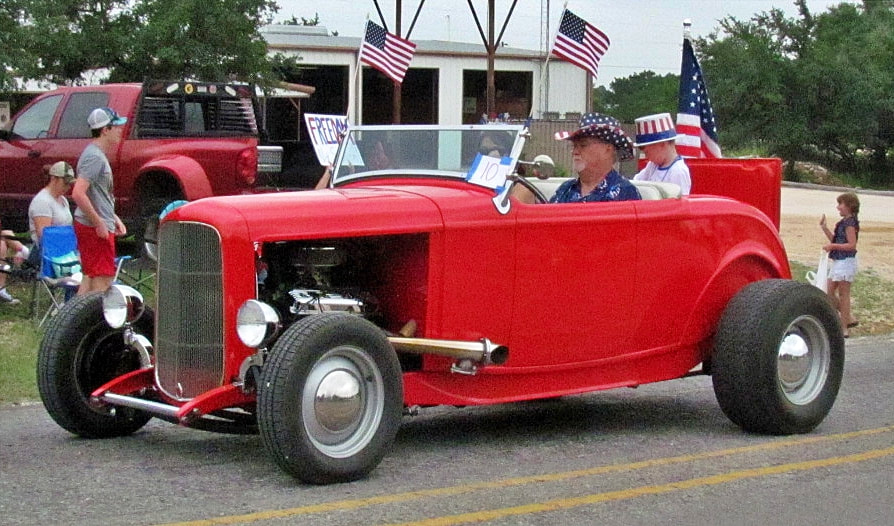 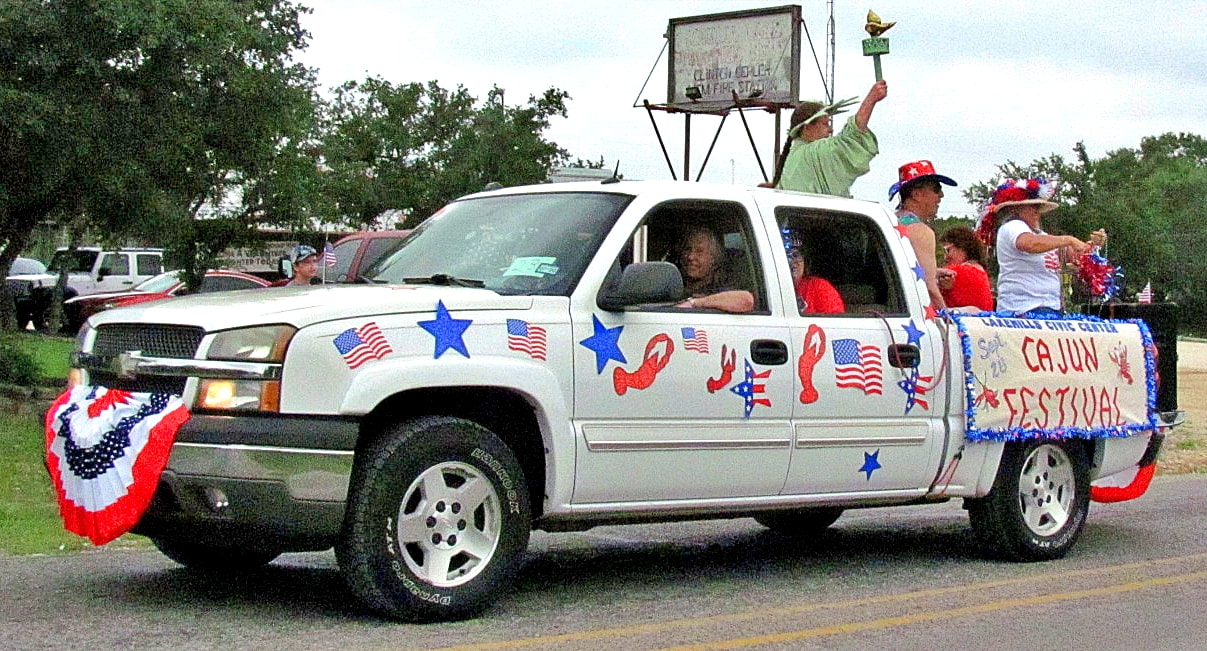 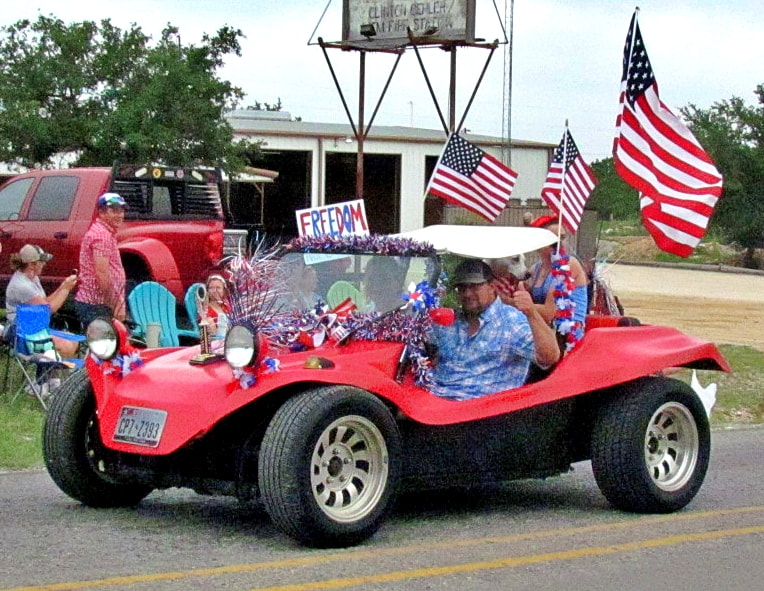 Most Original winner was Trevor Morgan in his little red dune buggy decorated with lots of bling. 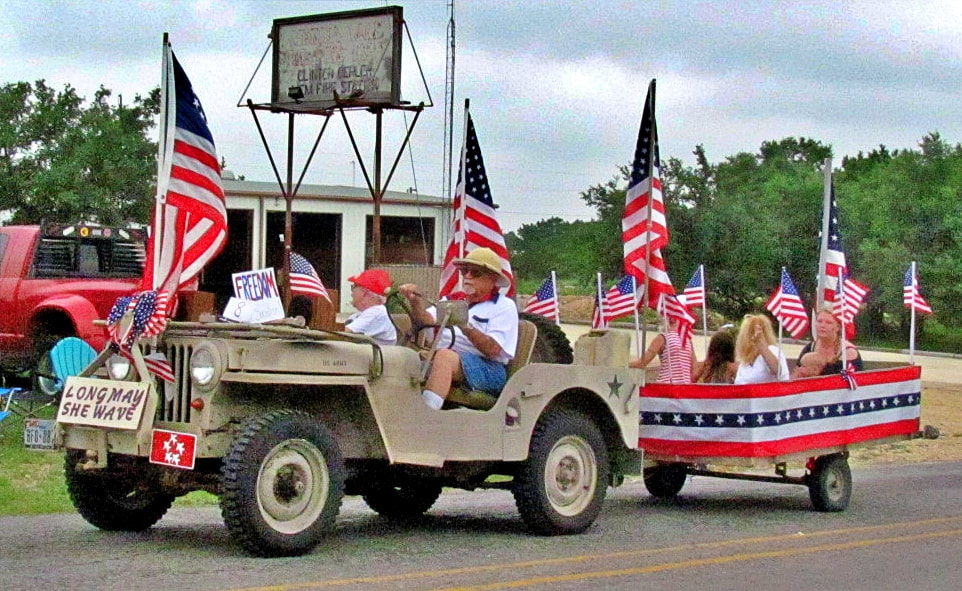 Ron Bird was voted Most Patriotic in his 1947 Army jeep.

Among the many participants in the Lakehills American Legion parade on July 4, were the winners of the five categories of judging. Every winner received a trophy for their efforts.
Most Patriotic went to Ron Bird in his 1947 Army Jeep, with the sign up front and flags galore.
The Medina Lake Betterment Association’s Cajun Festival won Showmanship, with the Statue of Liberty and plenty of beads thrown to spectators.
Most Original went to Trevor Morgan in his little red convertible dune buggy, with lots of bling and flags.
Bruce Koehn was awarded Most Patriotic Vehicle with his blue truck bedecked in red and white ribbons and flags.
Rick McCraken drove a young “Uncle Sam” in an antique red coupe to garner the Youth trophy.
And the biggest winner of all is the woman who served as Parade Marshall, Ruth Tschirhart. I knew she has been active in the Legion Auxiliary since 1968. But I learned that she was a charter member of that group when it began on January 2 of that year.
Tschirhart has, at different times, served in every officer position. She was President from 1976 to 1979. She is currently the Unit Historian officer.
During 1973-1974, she served as American Legion 21st District President.
She often quotes the Unit’s motto, “It’s not the price we pay to belong … It’s the price they paid for our eligibility.”
Kudos to all the winners!

​LAKEHILLS LIBRARY
The Lakehills Area Library is continuing the summer reading program for the kiddos. The theme is “A Universe of Stories” and it is not too late to join. The next meeting is Wednesday, July 10, at 10:30 a.m., and the youngsters will create their own Clay Aliens. Go by the library at 7200 FM 1283 to sign up. For more information, call 830-510-2777.

LAKE AND RIVER
On Monday, July 8, our Medina Lake level was 1064.19 feet. That is down 0.01 feet, which is 100 percent capacity.
The Medina River had a flow of 69.1 cfs in Bandera, running 4.25 feet deep at the gage.
Please send your Lakehills and Pipe Creek news to me by email at vicki.george329@hotmail.com or call me at 210-563-1186 and leave a message.
Until next time, “¡Vaya con Dios!”
The Bandera Prophet is grounded on the premise that relevant news delivery is ever-evolving. Founded by newspaper veterans, the Prophet delivers up-to-date information by writers and photographers who combined have 50-plus years of experience in the field and newsroom. Always free to readers, the Prophet is published on multiple platforms, and shared within the online community to more than 150,000 people. No paywalls and no paid subscriptions make news and feature stories immediately available with one click of a button or one swipe on a keypad.
​
All content copyright property of The Bandera Prophet