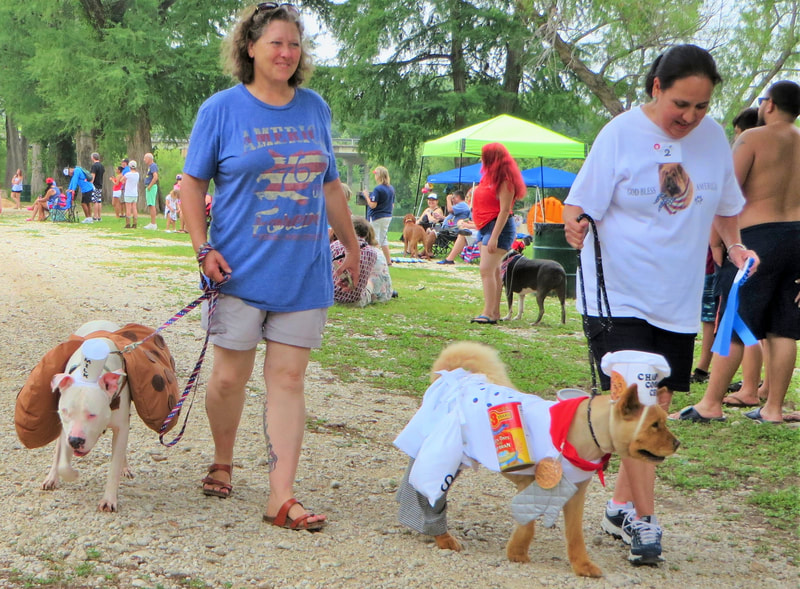 Winners of the Most Original class, Charlie and Jolene, and their humans. 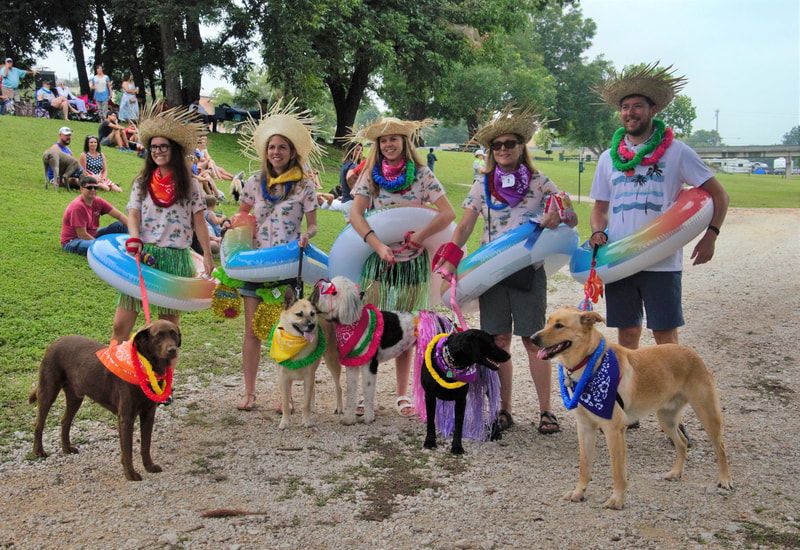 The Beach Crew and their owners, winners of the Look-a-Like class, were from Houston. 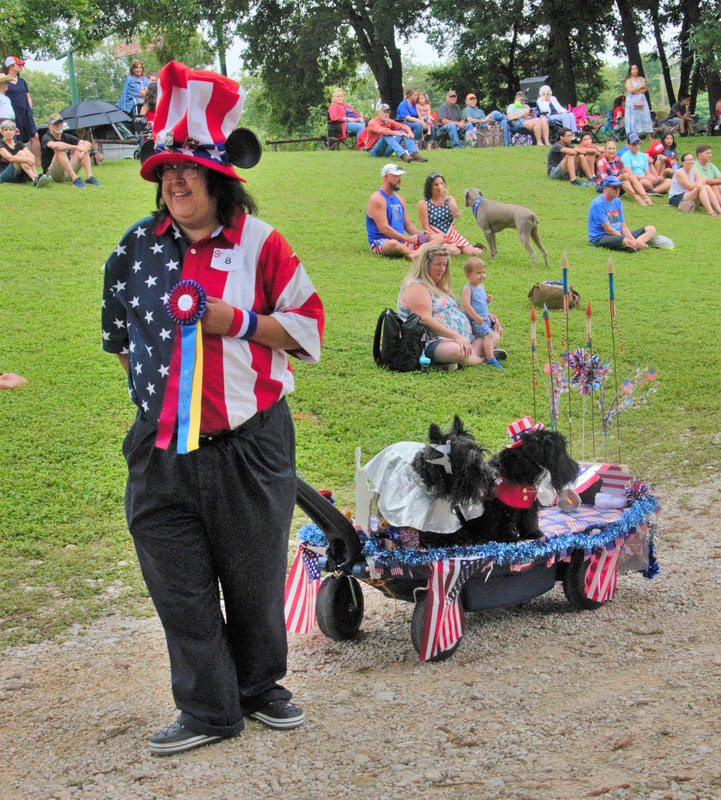 Duchess and Elsa, the Scotties, won the Most Creative class.

There are a few constants in Bandera during July every year: it’s going to be hot, there are going to be hotdogs on a grill somewhere, firecrackers will be lit and there will be a pet parade in Bandera City Park.
This year held true with all of the above and for the 23rd year in a row, the Bandera Pet Parade was a gathering for locals and out-of-towners and their pets, either watching or participating in the event.
The City of Bandera allowed participants and spectators free access to the park until noon and an estimated crowd of 300 took advantage of that to watch 32 entries parade along the lower level road with the serene Medina River as a backdrop.
Many of the animals in the parade were rescues from local shelters or breed specific organizations.
One of the winners in the Most Original category, Charlie the American Bulldog, was one of those and has a very interesting background.
Charlie is believed to have been a bait dog for a dog fighting ring before his rescue. As a result, he had lost an eye and had to have the other removed after his rescue. Even though he is totally blind, owner Karen Cole says he is now happy and enjoys life to the fullest. It was obvious Charlie was enjoying his time in Bandera by anyone that saw him.
The results show that many of the participants are from outside Bandera County and organizer Karen Hensley would like to see more local pets brought out to next years event in an attempt to reach 50 entries.
She would like to thank the sponsors: the Cowboy Capital Pet Assistance League Inc., the Barrel House Feed Store in Pipe Creek for the free dog treats, the judges, volunteers and announcers Laurie and Sally Gibson for making the event a success.

Most Original: 1 - Jolene (Chow) and Charlie (American Bulldog), dressed as Cookie Chef and a cookie, shown by Joyce Hayes and Karen Cole of Dripping Springs; 2 - Shootzie (Boston Terrier Mix), shown by Brook and Lauren Summers; 3 - Halo (Maltese/Bjon), dressed as a service dog angel, representing all  companion animals that have crossed over the Rainbow Bridge, shown by Jeanne B. of Bandera

Favorite Storybook Character: 1 - Ladybug (Mini Pin), shown by Alexis and Emma McCartney of Bandera
The Bandera Prophet is grounded on the premise that relevant news delivery is ever-evolving. Founded by newspaper veterans, the Prophet delivers up-to-date information by writers and photographers who combined have 50-plus years of experience in the field and newsroom. Always free to readers, the Prophet is published on multiple platforms, and shared within the online community to more than 150,000 people. No paywalls and no paid subscriptions make news and feature stories immediately available with one click of a button or one swipe on a keypad.
​
All content copyright property of The Bandera Prophet