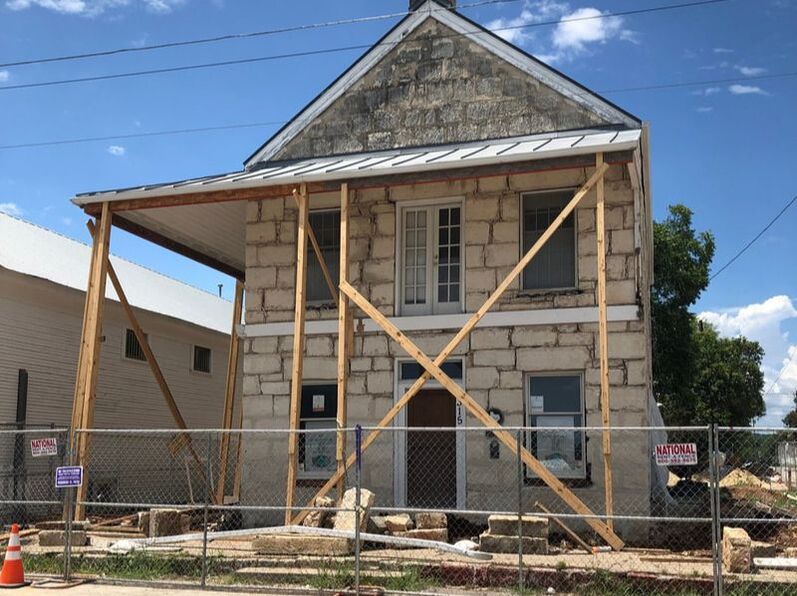 The future home of Hyo Silver is on temporary hiatus pending state permitting.

In his last meeting as president of the Economic Development Corporation, Art Crawford was called upon to break a tie involving a Facade Improvement Grant request by Nancy Harvey, owner of the Spirits of Texas at the former Gunslinger location at 1105 Cypress St.
Harvey said the repairs and upgrades to the building's front cost $22,000 and had requested $11,000 from the EDC. State law limits the grants to $10,000 max.
Board member Laura Devenport asked Harvey why she needed to update, stating the building was one of the better looking structures in Bandera’s historic area. Harvey said water damage and rotten support beams were found during some routine repairs.
Toni Kunz echoed Devenport's sentiments, saying she didn’t think it needed to be done. Devenport asked if there were any photos of the damage available. Harvey said she would ask the builder.
Thomas McEachin went through the outline of the criteria for the grant and said the building did meet most of the requirements for the grant money but did say it looked okay as it was.
Cindy Harrington made a motion to approve $7,000 which was seconded by McEachin and more discussion followed. While the entire board agreed the building looked very nice, however they split three to three, forcing Crawford to vote for the first time in his three years as president.
His nay vote failed the motion, but Harvey was told that there were grants available for the sign and the  improvements to meet ADA guidelines she had made to the building.
Hyo Silver, a local silversmith and jewelry store, has taken on the task of upgrading the building located at 315 11th Street for their new location.
The building needed some major renovations due to age, foundation work, rotten wood and upgrades to  meet ADA guidelines, but owner Josie Symons said they are very excited about the way things were progressing.
Repairs are at a temporary, voluntary standstill as they wait on permits from the state. Board member Andrea Cavanaugh asked Symons about the time frame on the permitting and Symons said it could take up to 90 days, but 30 days was probably more realistic. Davenport asked if there were any grant money available from the state at if so, that should be looked into.
Kunz noted the building is on Bandera's original "Main Street" and fit the EDC's vision for upgrades to city buildings.
The board voted unanimously on the maximum $10,000 amount for both the Facade Improvement and the Building Improvement grants with the possibility of more funds availability later under a performance agreement.
J&S Liquors had a pre-funding Facade Improvement request presentation for their building at 112 Hwy. 16 S.
Building owner Sharon Caviness said they noticed a leak had started on the porch and after getting a permit from the city, started repairs and found a lot of rotted and sagging support beams. Repairs were completed at a cost of $3346.80.
As this was a presentation, the actual grant request is usually about a 30-day wait, but there had been notice given earlier in the evening about a special called EDC meeting scheduled for July 17 regarding real estate.
Originally, the meeting would have been opened and gone directly into executive session, but it was noted that the J&S grant request could be added to that agenda as it was the next meeting after their presentation per EDC guidelines.
Before the meeting was over, the board members had some discussion about moving forward to clarify the EDC's vision and it was decided that Kunz and Devenport would make a list of recommended changes to present at a later meeting.
The Bandera Prophet is grounded on the premise that relevant news delivery is ever-evolving. Founded by newspaper veterans, the Prophet delivers up-to-date information by writers and photographers who combined have 50-plus years of experience in the field and newsroom. Always free to readers, the Prophet is published on multiple platforms, and shared within the online community to more than 150,000 people. No paywalls and no paid subscriptions make news and feature stories immediately available with one click of a button or one swipe on a keypad.
​
All content copyright property of The Bandera Prophet