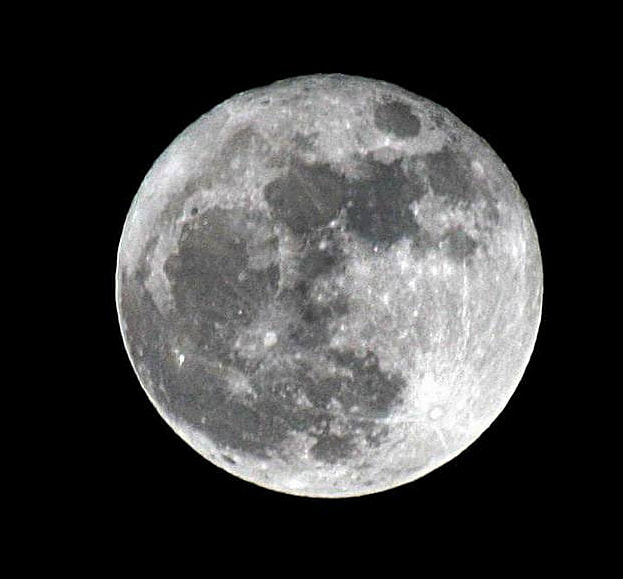 Fifty years ago today, man landed on the moon

Today marks the 50th anniversary of the first time a person made a footprint on the moon. On July 20, 1969, at 20:17 Coordinated Universal Time (UTC) or 3:17 p.m. Central Standard Time, the Apollo Lunar Module Eagle landed on the lunar surface. Commander Neil Armstrong stepped onto the moon at 2:56 UTC (9:56 CST) and Pilot Buzz Aldrin followed him 19 minutes later. Third Astronaut Michael Collins remained on board the Apollo in the command module.
Apollo 11 was the first crewed mission to land on the moon, but America was not the first to pioneer a moon landing. The Luna 2, a Soviet Union-made cosmic rocket, touched the moon on Sept. 13, 1959, launching a space race that took 10 years for the United States to catch up.
Since the Apollo 11 landing, NASA reported six more crewed U.S. landings (Apollos 12 through 17) between July 1969 and December 1972. The United States is the only country to achieve this.
Back on Earth, CBS News Anchor Walter Cronkite documented the event, broadcasting for a straight 32-hours. The White House coordinated the longest long-distance phone call, connecting President Richard Nixon from the Oval Office to the Sea of Tranquility. That call was heard by the world.
What the world didn’t know, however, was that a speech had been prepared for the just-in-case.
“Officials in the White House and at NASA laid out lugubrious contingency plans in case astronauts Neil Armstrong and Buzz Aldrin landed on the moon, but then were unable to get off the surface and back to the space capsule,” Author James Mann wrote, who’s working on a book about Dick Cheney and Colin Powell. “The White House chief of staff instructed William Safire, then a White House speechwriter, to draft a remarkable speech for President Richard Nixon to deliver ... if the astronauts were stranded.”
While researching for a book on another subject, Mann said he discovered the document while looking through the archives of the Nixon administration.
“Safire’s undelivered speech lay hidden for nearly three decades before I found it,” Mann said.
The memo was titled, “In event of moon disaster.”
Fortunately, that speech was never read. 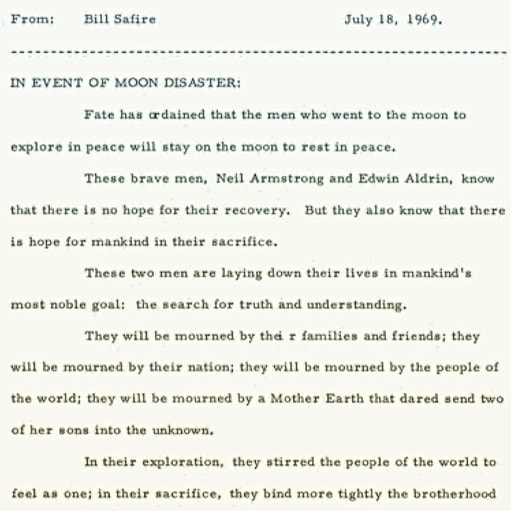