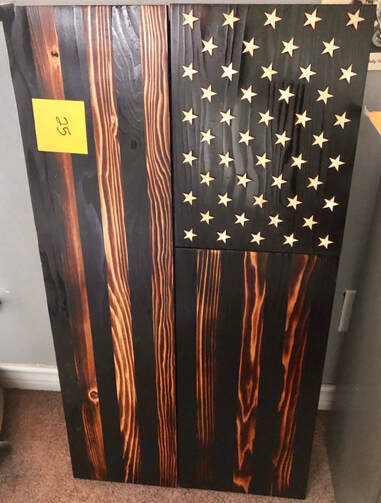 The American Legion Post 410, of Lakehills, was awarded this plaque for placing second, out of 433 posts from the entire state of Texas, honoring their service to their community. The award was presented at the State Convention on July 14.

By Vicki L. George
Special to the Prophet

The American Legion of Texas held their annual state convention over the weekend from July 9 through 14 in Irving.
While representatives from both our county posts attended the convention, Post 410 of Lakehills was represented by James Reynolds, Joey Bess and Will Evans. Post 157 sent Patricia Downing, Susan Junker and Dennis Birchall, all of Bandera.
Going to the convention Reynolds was the Post 410 and District 21 Commander. With the elections complete, Bess was installed in that position. Evans is the current Sergeant-at-Arms of Post 410.
While the Lakehills post has received awards in the past for retention and membership, this year they were especially proud to have placed second in Community Service. Considering there are 433 posts in the state, this is quite an accomplishment. For this achievement they brought home a beautifully engraved plaque.
Reynolds said this feat was all the more impressive since the first place post boasts 1,000 members, while Post 410 currently has 186 members.
Bess proudly stated, “We were the second best post with community service for the entire state, which consists of 433 posts.” He was also proud that the local post membership grew by 50 new members in the last year. He cited the amazing amount of service to our community as the lure that drew the new members in.
Throughout the year Post 410 holds many fundraising events and, while some of the funds go to supporting the veterans themselves, much of the monies raised go to help other non-profits. Currently the Legion gives to Boys and Girls Club, Silver Sage, Arthur Nagel Clinic, Medina Lake Betterment Association, Medina Lake Volunteer Fire Department, Little League, Cub Scouts, Boy Scouts, and sports equipment for the Pipe Creek Christian School, as well as school supplies for Hill Country Elementary students.
In addition, many Post 410 members serve Meals on Wheels, and are volunteer fire fighters. Some work with the Food Bank, volunteer with the MLBA, and serve in local churches.
The Post has a two mile stretch of FM 1283 that they clean up periodically. They installed the flag poles at the Lakehills Area Library and keep those flags flying. They have installed wheelchair ramps for wounded warriors and they honor our fallen heroes at the local cemetery.
Our local veterans do so much for our community, it is no wonder they were honored with an award.
Post 410 encourages all veterans to join with them, to help each other and to serve their neighbors.
The Lakehills Post 410 Hall is open to the public from Friday through Wednesday every week. The hours are from 3 to 9 p.m. They provide a playground for the kids, dart boards, pool table, TV and music.
On Tuesdays, starting at 5 p.m., hamburgers are available for $5.
On Wednesdays, from 6-8 p.m., a dinner meal, consisting of meat, two sides and dessert, will be available for $8 a plate. Poker is the game for the evening, starting at 7 p.m.
On Fridays, beginning at 5 p.m., dinner plates will be served for $8 each and will include entree, salad and dessert. ​
For more information, contact the Post at 830-751-3711 or email americanlegion410@att.net. Stop by the Hall at 147 26th St. in Lakehills.
The website is alpost410.com and find them on Facebook under American Legion Post 410. ​
The Bandera Prophet is grounded on the premise that relevant news delivery is ever-evolving. Founded by newspaper veterans, the Prophet delivers up-to-date information by writers and photographers who combined have 50-plus years of experience in the field and newsroom. Always free to readers, the Prophet is published on multiple platforms, and shared within the online community to more than 150,000 people. No paywalls and no paid subscriptions make news and feature stories immediately available with one click of a button or one swipe on a keypad.
​
All content copyright property of The Bandera Prophet