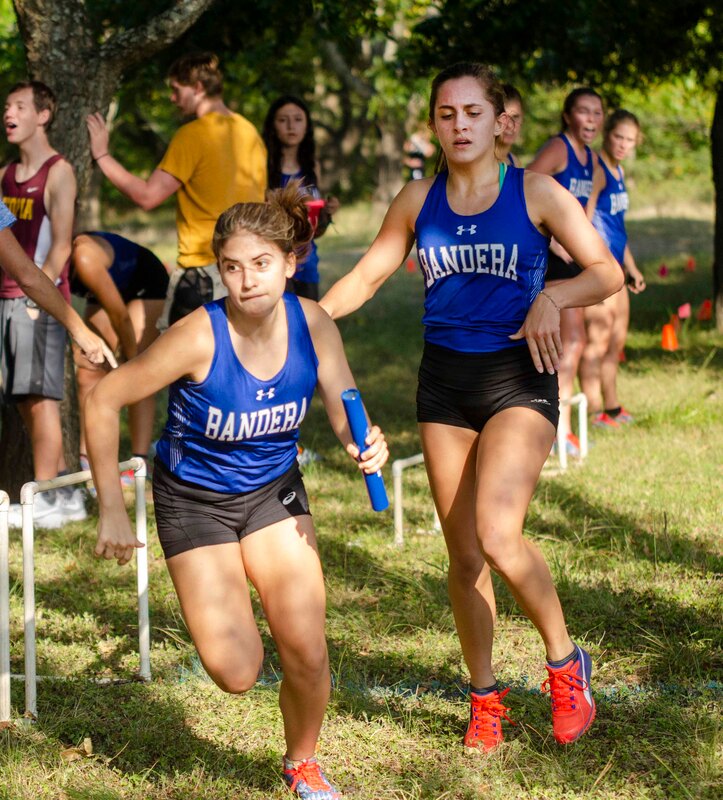 Bandera's Jordan Edwards takes off after receiving the baton from Morgan Cole. 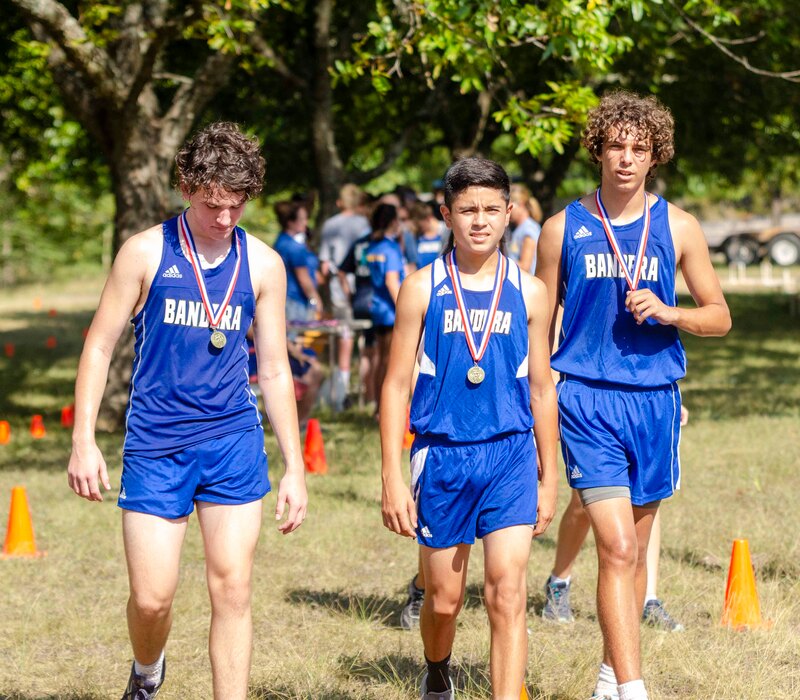 Members of the Bulldogs CC team after finishing their run. 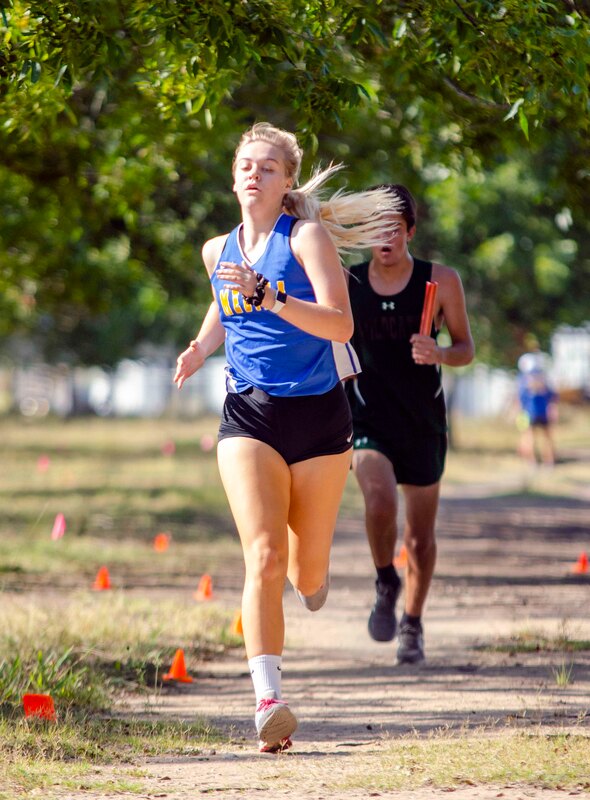 A solitary Lady 'Cat runner shows the grind of the early season as she winds through the pecan grove on the Arms of Hope campus.

CC season starts in Medina with a relay

Nestled in the hills between Medina and Kerrville, the Arms of Hope campus was the site of the first annual Medina Cross-Country Relays.
With a nearly flat course layout that crisscrossed through a pecan grove, it was a good venue for an early season run.
Six schools, Bandera, New Braunfels Christian Academy, Rocksprings, Austin St. Michaels, Utopia and Medina, entered three-man teams that ran two, mile long legs in the varsity or a single leg in JV.
St. Michael's and Bandera battled for the top spot in the girls varsity with St. Michael's finishing first (35:01) and third (36:21) with the Lady Bulldogs top two teams finishing in second (35:52) and fourth (37:11). Other team results were Utopia/Rocksprings combo (37:23), the two other Bandera teams in 37:52 and 37:57 and last but not least, New Braunfels Christian Academy in 45:39.
"The girls were strategically placed on each of the teams so they would have to get out of their comfort zone and compete against each other and the other teams. All of the girls improved their times and showed true grit by working on closing gaps with each other and finishing hard," Bandera coach Brooke Ashcraft said.
Medina won the JV girls in (19:13) with St. Michaels second (19:38) and Bandera in third with a 21:46. Medina's four other entries finished in 22:28, 22:45, 23:42 and 23:43.
"I was very proud of their effort they gave, as each of them improved their times and showed potential to continue great growth with hard work," Ashcraft said about the JV Lady Bulldogs.
St. Michaels took the boys varsity as well with a quick, 29:16 with Rocksprings second in 30:21 and Bandera third with a 31:57. Rocksprings only had two runners so they both ran two and a half legs each. The three other teams were St. Michaels (32:00), Bandera (33:26) and New Braunfels Christian Academy (39:46).
In Boys JV action, St. Michaels and Bandera fought it out with the Austin based team winning with a 16:47 to Bandera's, 16:57 and host Medina took third in 17:16. Utopia finished in 17:39 and Medina had two teams finish in 18:34 and 19:40.
Both Bandera and Medina will run in Comfort this Saturday.  ​
The Bandera Prophet is grounded on the premise that relevant news delivery is ever-evolving. Founded by newspaper veterans, the Prophet delivers up-to-date information by writers and photographers who combined have 50-plus years of experience in the field and newsroom. Always free to readers, the Prophet is published on multiple platforms, and shared within the online community to more than 150,000 people. No paywalls and no paid subscriptions make news and feature stories immediately available with one click of a button or one swipe on a keypad.
​
All content copyright property of The Bandera Prophet