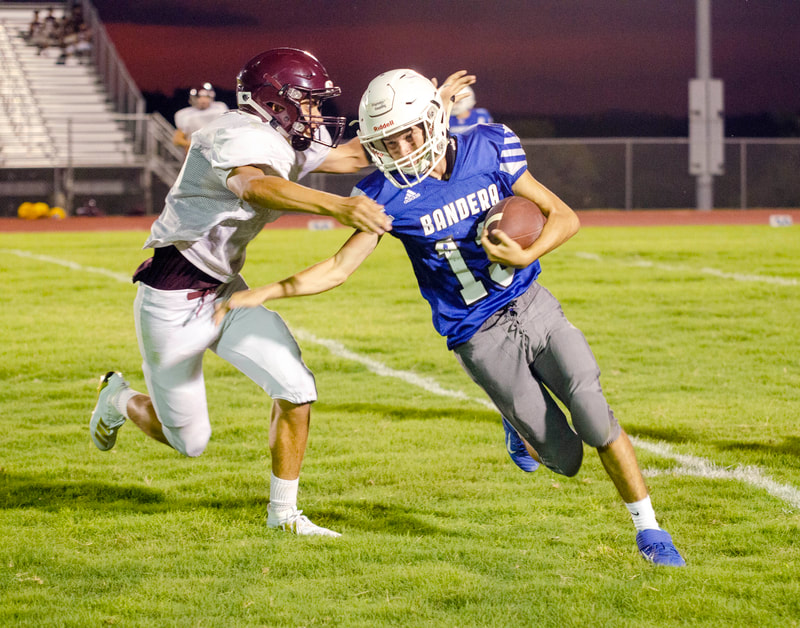 Harvey Guerra made the second interception of the varsity scrimmage against Devine. 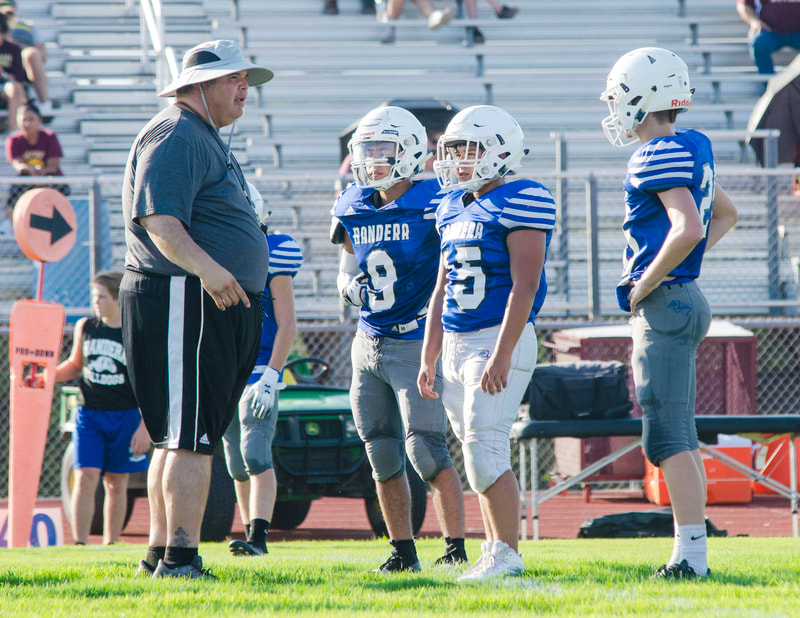 Bandera's Bulldogs finally got a chance to hit someone other than a teammate as the first scrimmage of the season took place this past Friday  against Devine at Bulldog Stadium.
A combined sub-varsity (freshmen and JV) team took to the field for the first hour and although outnumbered, the Bulldogs more than held their own against the larger in size and numbers, Warhorse squad.
Early in the varsity scrimmage, Bandera's Tommy Cardenas found the endzone on a short run to cap off an extended drive.
As usual, two weeks into the season, the defense was a little further along  than the offense and it showed. Bulldogs, Ian Short and Harvey Guerra, each had an interception to terminate Warhorse scoring drives, however Devine did cross the goal line on a nice QB keeper toward the end of the scrimmage.
Defensive Coordinator, Manny Martinez, told the defense to "Celebrate success", on more than one occasion.
Bandera coaches were proud of the effort from the varsity. After running a set of gassers from sideline to sideline, coaches addressed the team.
"The most improvement we will see is between the first and second scrimmage. We protected the ball well on both levels with only a single turnover. We need to work on some things that we talked about last week, but we took a big step forward and I feel a lot better about us today," Head Coach Joel Fontenot-Amadee said.
"Two weeks of working the defense, we are going to see the good, the bad and the ugly! I don’t question the effort, just the execution, but thats ok, we are still growing," Martinez said.
After all was said and done, the general consensus from spectators and parents was the best the varsity Bulldogs have looked in an opening scrimmage in a few years.
The Bandera faithful will have to take to the road this Friday as the Bulldogs will take on the Cole Cougars. The 3A-D1 Cougars are Fontenot-Amadee's prior team, so it promises to be an interesting scrimmage.
The Bandera Prophet is grounded on the premise that relevant news delivery is ever-evolving. Founded by newspaper veterans, the Prophet delivers up-to-date information by writers and photographers who combined have 50-plus years of experience in the field and newsroom. Always free to readers, the Prophet is published on multiple platforms, and shared within the online community to more than 150,000 people. No paywalls and no paid subscriptions make news and feature stories immediately available with one click of a button or one swipe on a keypad.
​
All content copyright property of The Bandera Prophet