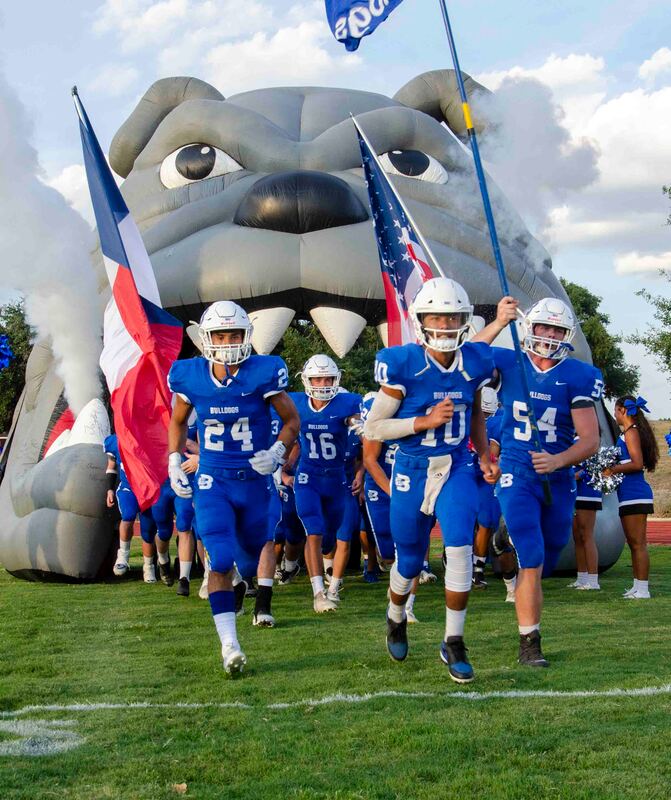 The Bulldogs take the field for the first non-district game this season against San Antonio Memorial. 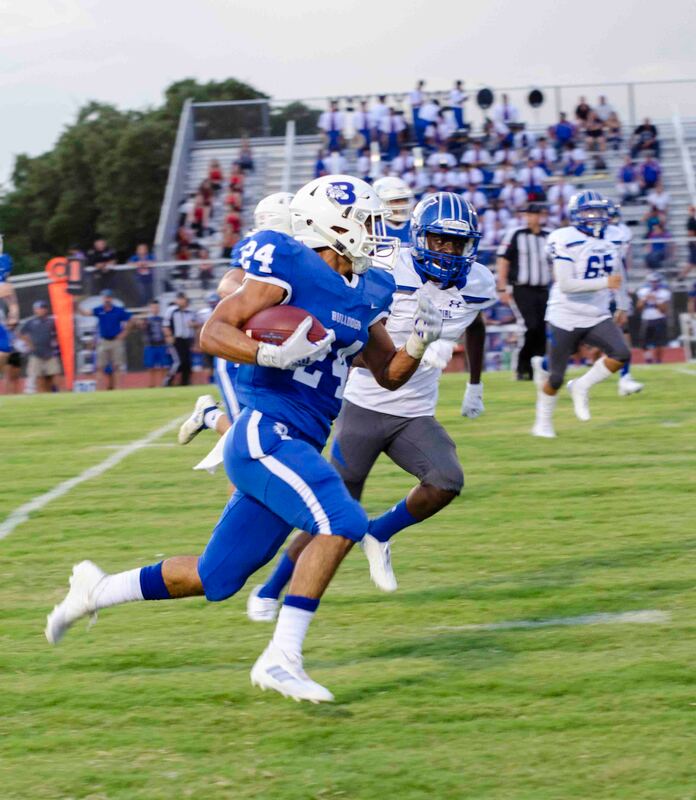 Tommy Cardenas jets down the right sideline during the contest against San Antonio Memorial. Cardenas led the Bulldog rushing with 119 yards. 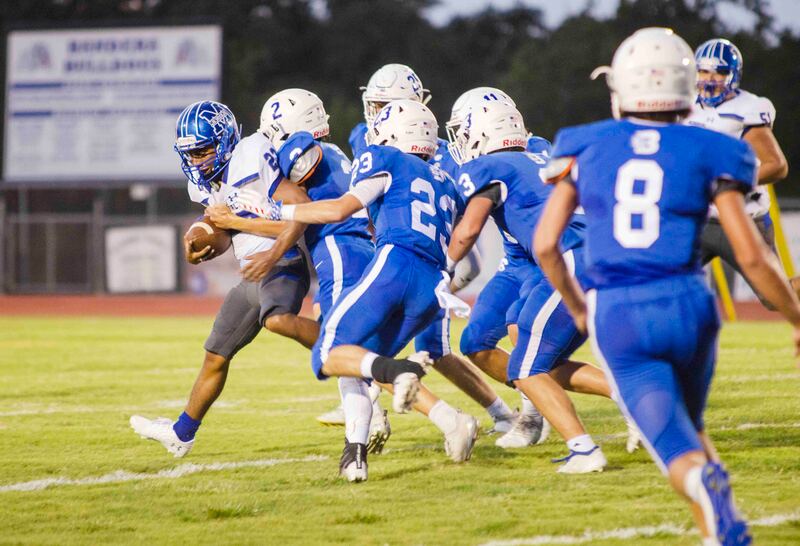 The Bulldog defense cluster to a Memorial ball carrier. 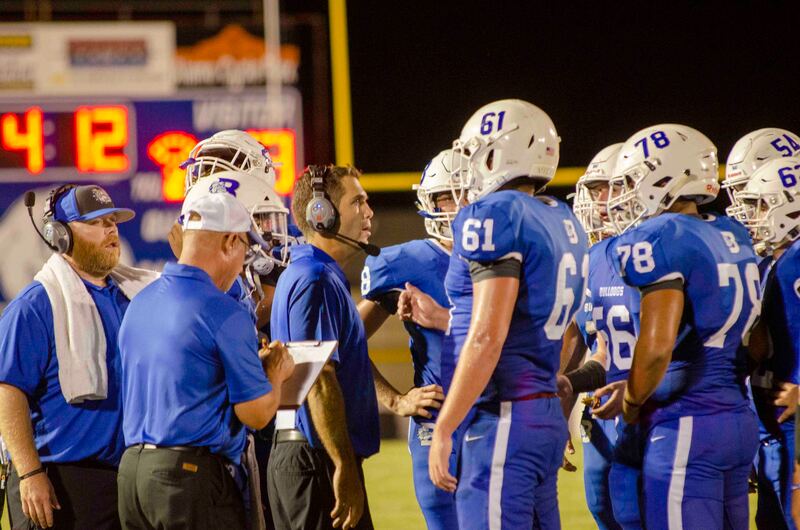 Coaches and players confer during a timeout late in the game. 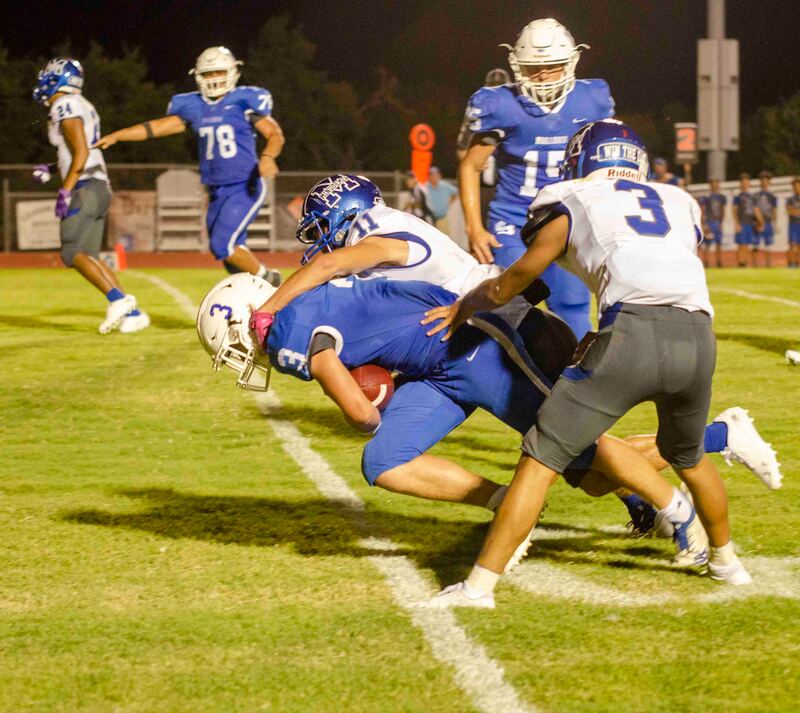 Brock Johnson, a sophomore, crosses the goal line for the Bulldogs third rushing touchdown of the night. 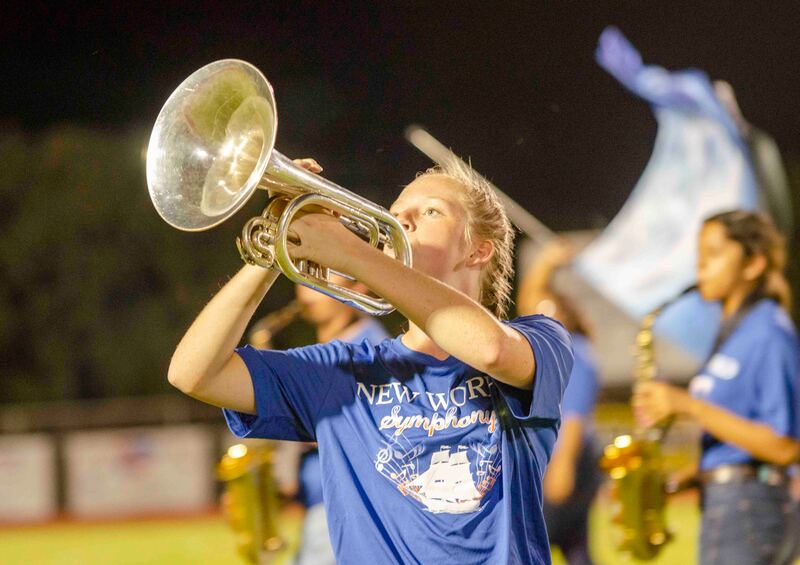 The Bulldog band performed during halftime on Friday night. 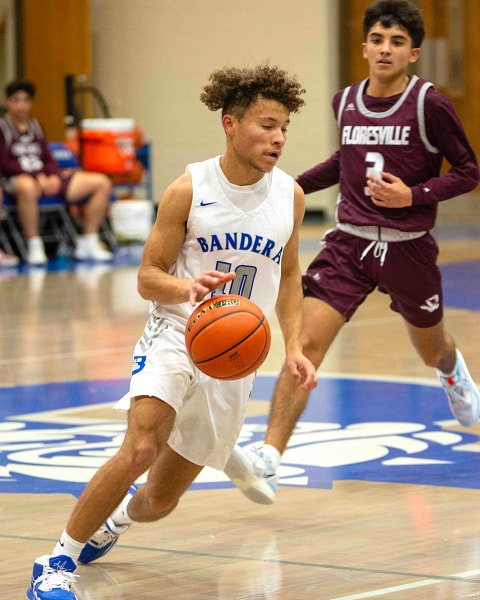 Bulldog Gunnar Brown fights for yardage in the second half. Brown scored the first touchdown of the night for Bandera in their 20-13 win over Memorial.

Bandera's varsity Bulldogs scored three times in the third quarter and held on against a late game surge by San Antonio Memorial to open their season with a home win Friday night.
First game jitters were evident as both teams combined for 21 penalties in the game, with a third of those in the early minutes of the first quarter, but they settled down as the game went on.
After Bandera had a 70 yard scoring run by Tommy Cardenas early in the first quarter called back due to a holding call behind the play, the score was knotted at 0-0 through the first.
The game continued to be a defensive battle through most of the second quarter and it was looking like both teams would go into the locker room scoreless at the half, but Memorial managed to get into the end zone from 35 yards out, with just 36 seconds left, to go ahead, 7-0.
Mounting worries about Bandera's offensive capabilities were put to rest when the Bulldogs put 20 points on the scoreboard in less than seven minutes in the third stanza.
Bandera tied the game at 7-7 with their first rushing touchdown of the season on a fourth and goal from the one yard line by Gunnar Brown and a good PAT by Blaise Salazar.
That was followed up with Tommy Cardenas finding the end zone less than two minutes later on a five yard rush and a Salazar PAT moved the Bulldogs into a 14-7 lead.
A Brock Johnson 10 yard run with 2:12 left in the quarter made it 20-7 after the PAT attempt was blocked.
Bandera was in the redzone, looking to add to their lead early in the fourth, but a failed field goal attempt ended the drive.
Memorial did score late in the fourth on a rushing touchdown with 5:20 left in the game. Bandera's Gunnar Brown made a good stop on Memorial's two point try to keep the score at 20-13.
Bandera had 288 yards of offense, 256 rushing and just 32 passing, but it was all they needed to get the win in spite of penalties and a few fumbles working against them.
Third downs were not kind to Bandera as they went  0-7 on third down conversions, but the Bulldogs were perfect (3-3) when they decided to take a chance on fourth down.
Defensively, Bandera held Memorial to 260 yards of offense, limiting the Minutemen to 150 passing yards and just 110 yards on the ground, even though Memorial ran 75 offensive plays to Bandera's 56.
Gunnar Brown and Garrett Meier were named the Bulldog's defensive players of the week.
This Friday, Bandera will host San Antonio Christian School. The Lions lost last week to Central Catholic by a 42-19 count.
Last years contest in San Antonio between the Lions and Bulldogs resulted in an official 0-0 tie due to numerous lightning delays. Friday's forecast shows no chance of rain, so this game should be played all the way to the final whistle. Kickoff is scheduled for 7:30 p.m. at Bulldog Stadium.
Box score
1   2   3   4   Final
Memorial    0   7   0  6     13
Bandera       0   0 20  0    20
Bandera stats:
Passing_ S. MacNeil, 3-8-32-0-0
Rushing_ T. Cardenas, 17-119, S. MacNeil, 14-94, Gunnar Brown, 7-23, B. Johnson, 4-20
Receiving_ B. Johnson 2-25, T. Decker, 1-7
Tackles_ Gunnar Brown, 13, Gage Brown, 6, G. Meier, 6, T. Decker, 4, E. Evans, 4, C. Perkins, 4, T. Cardenas, 3, B. Johnson, 2
Assists_ Gage Brown 5, M. Musik, 5, I. Short, 4, B. Johnson, 3, Gunnar Brown, 3, T. Decker, 2
The Bandera Prophet is grounded on the premise that relevant news delivery is ever-evolving. Founded by newspaper veterans, the Prophet delivers up-to-date information by writers and photographers who combined have 50-plus years of experience in the field and newsroom. Completely free to readers, the Prophet is published on multiple platforms, and shared within the online community. No paywalls and no paid subscriptions
make news, sports, feature stories and more immediately available with one click of a button or one swipe on a keypad.
All content copyright property of The Bandera Prophet