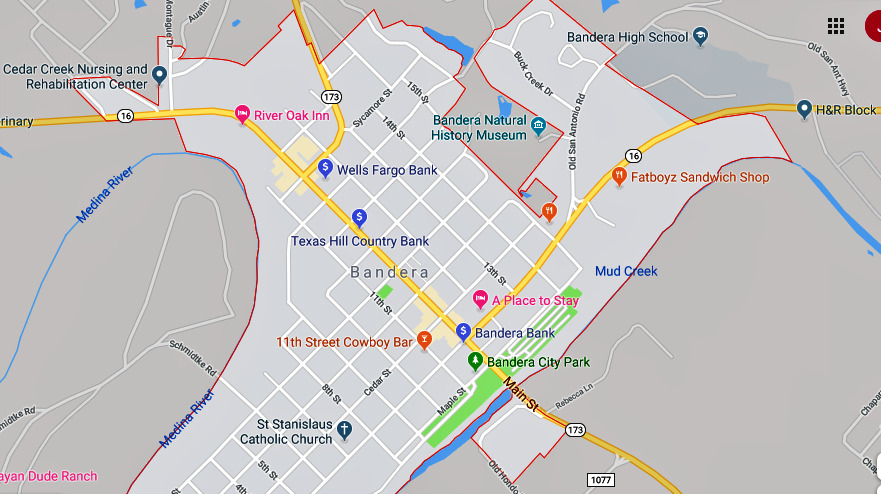 Bandera City Council members have approved an ordinance banning big trucks and busses on local streets. Though Google Maps and other mapping apps direct drivers toward shortcuts through Bandera’s residential roads, the city will soon be posting signs forcing semi-truckers and other commercial operators to reroute.
Initially planning to restrict the truck traffic on specific roads such as Bandera Blvd., council was told the ordinance could be more efficient by prohibiting certain vehicles by weight on all streets that are not state highways, such as Class 7 and 8 vehicles over 26,000 pounds gross weight.
“The city has the authority to include all local streets,” Bandera City Attorney Dan Santee said Thursday. “Your local streets are just not built like the state highways.”
Economic Development Corporation Director and Silver Sage Executive Director of Operations Art Crawford said the truck traffic has “gotten ridiculous” in the area around the senior center on Buck Creek Drive.
“If [Bandera Deputy Marshal Will Smith] wanted to, he could write 20 to 30 tickets per day for running the stop sign,” Crawford said of the intersection at Buck Creek and Bandera Blvd. “A senior citizen could get killed walking across the road or pulling out of the parking lot.”
Concerned citizen Rilla Stephens said she goes to the Silver Sage senior center every day.
“I cannot believe the 18-wheelers that are coming down from the school toward the bridge taking Bandera Blvd. It’s a hazard for seniors trying to cross the street,” Stephens said, adding she also believes 30 mph is too fast. “It’s a neighborhood. It should not have to contend with 18-wheelers. Somebody is liable to get killed.”
Santee said the city may place signs at the head of any street it deems necessary.

In other road business, county commissioners will hold a public hearing Thursday morning, Sept. 12, at 10 a.m., regarding naming new roads and changing the name of one. The proposed road names are as follows:
Precinct 4: Buena Vista Lane off FM 1077, Padgett Ranch Road off Williams Creek Road, Cypress Banks Road off Foster Ranch Road, Runway Drive in the Flying L; Precinct 3: Riveira Canyon Road on the Kerr/Bandera County line, Harbison Drive at the Medina Children’s Home, Logan Lane off Benton Creek/Pine Tree; Precinct 2: South Dakota Avenue in Avalon C and Legion Drive (formerly 26th St. W in Avalon).
For more information on the public hearing, see the public notice at https://www.banderaprophet.com/public-notices.html.
The Bandera Prophet is grounded on the premise that relevant news delivery is ever-evolving. Founded by newspaper veterans, the Prophet delivers up-to-date information by writers and photographers who combined have 50-plus years of experience in the field and newsroom. Always free to readers, the Prophet is published on multiple platforms, and shared within the online community to more than 150,000 people. No paywalls and no paid subscriptions make news and feature stories immediately available with one click of a button or one swipe on a keypad.
​
All content copyright property of The Bandera Prophet