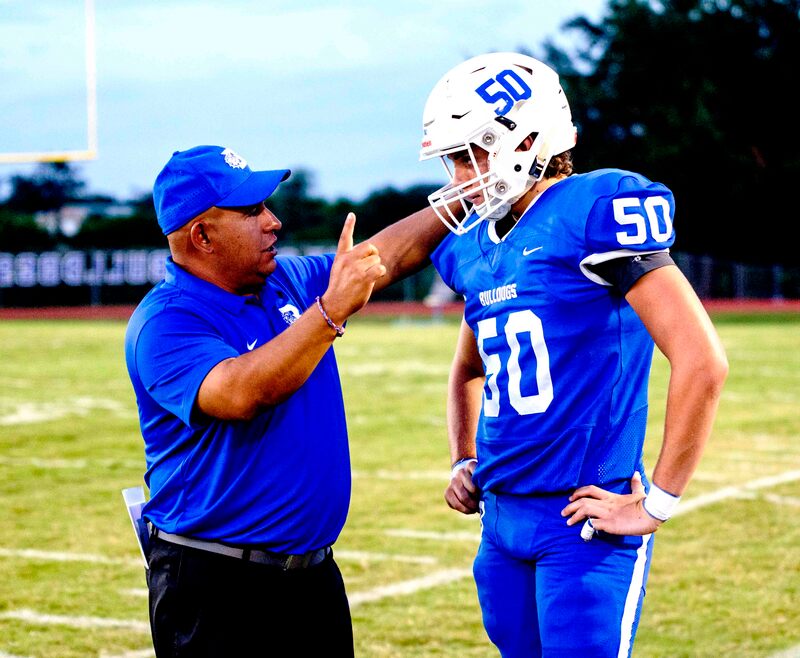 A member of the Bulldog coaching staff has a word with Liam DeMarchi early in the game. 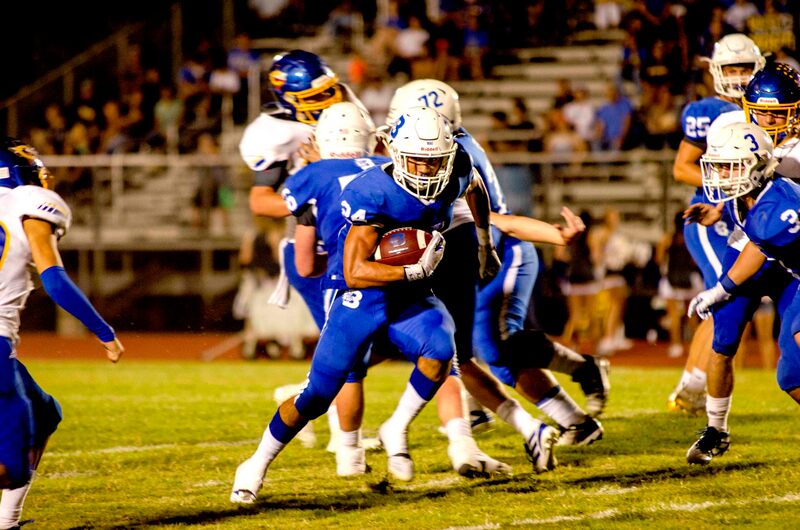 Tommy Cardenas runs for some of his 86 yards on the night. 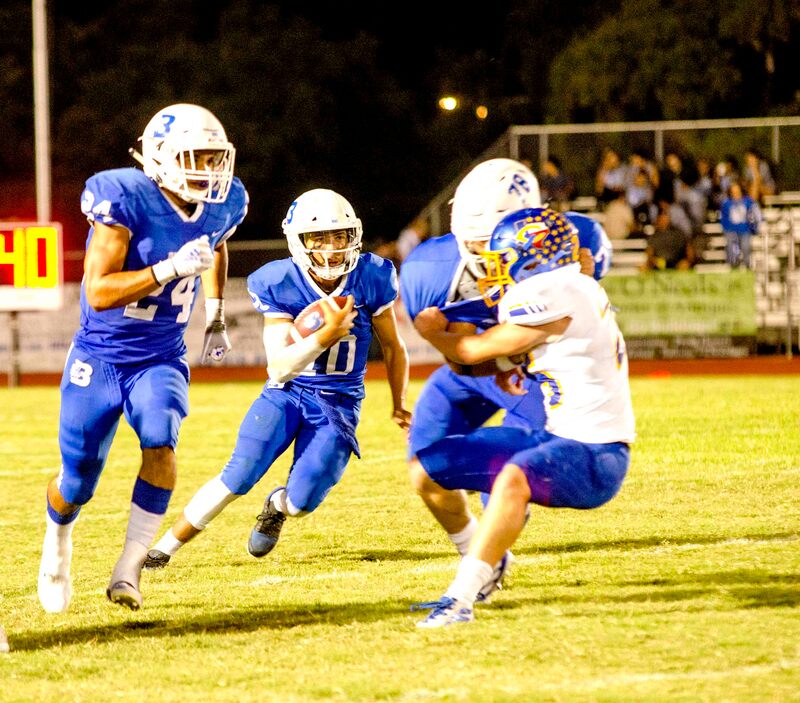 Bulldog QB, Solomon MacNeil (10) makes a cut behind the block of Colton Perkins (78). 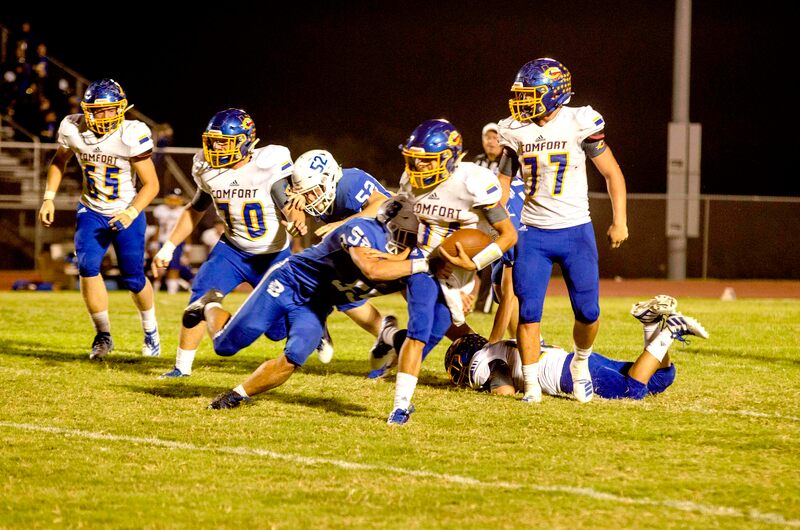 Emmitt Evens (55) brings down a Comfort back on a solo tackle. 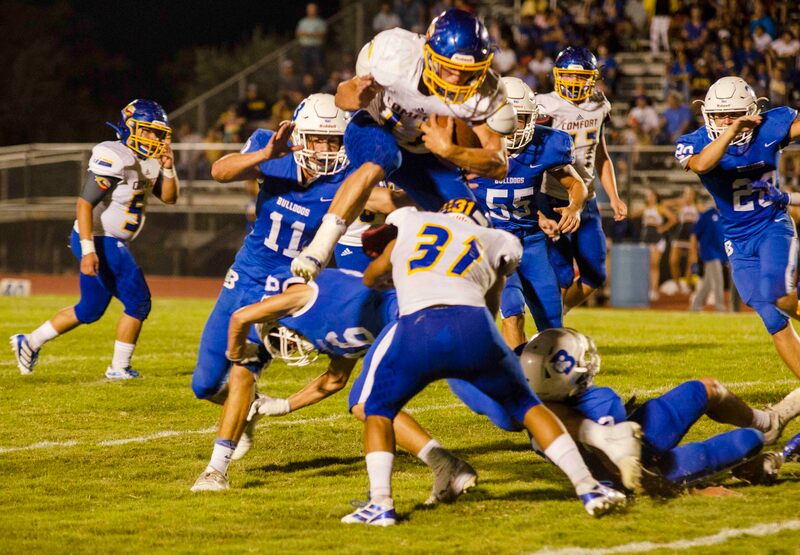 A Bobcat back tries to hurdle the Bulldog defense late in the game. 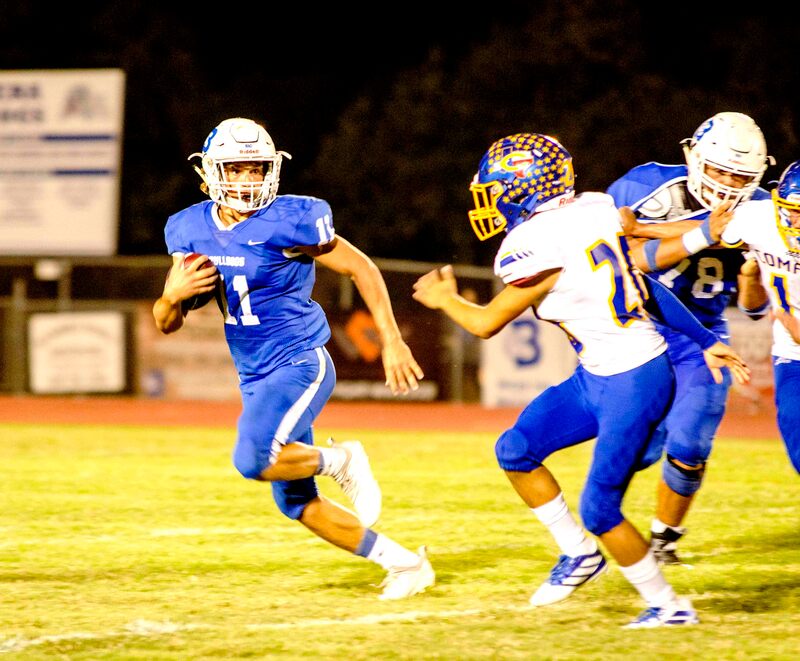 Bulldog RB, Gunnar Brown, stares down a Bobcat DB. Brown had two carries for 16 yards along with a 33 yard touchdown pass to Mason Phair. 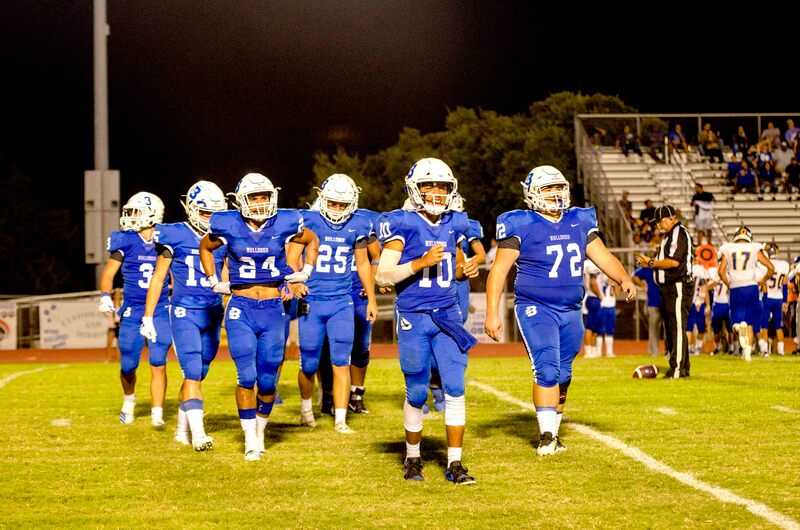 The Bulldog offense heads to the sidelines during a timeout late in the game. 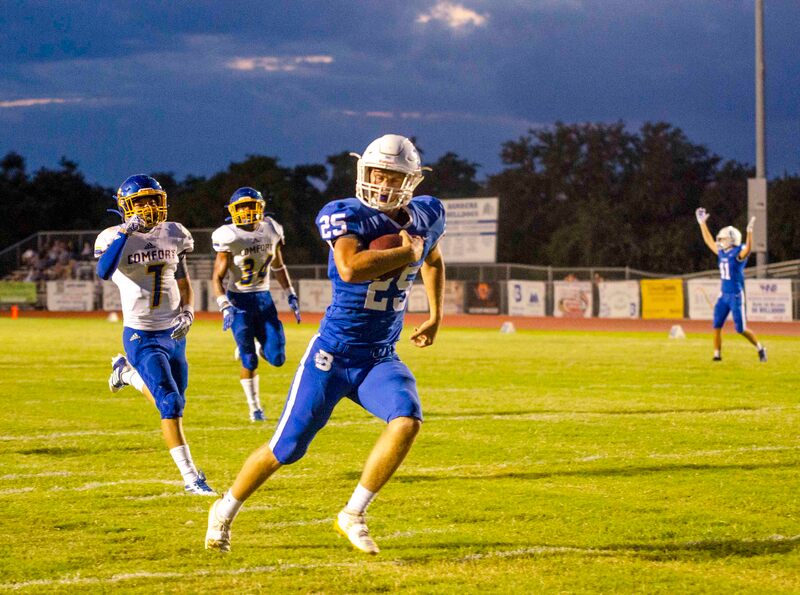 Mason Phair scores one of his three touchdowns for the night. All three of his catches scored a touchdown Friday night. 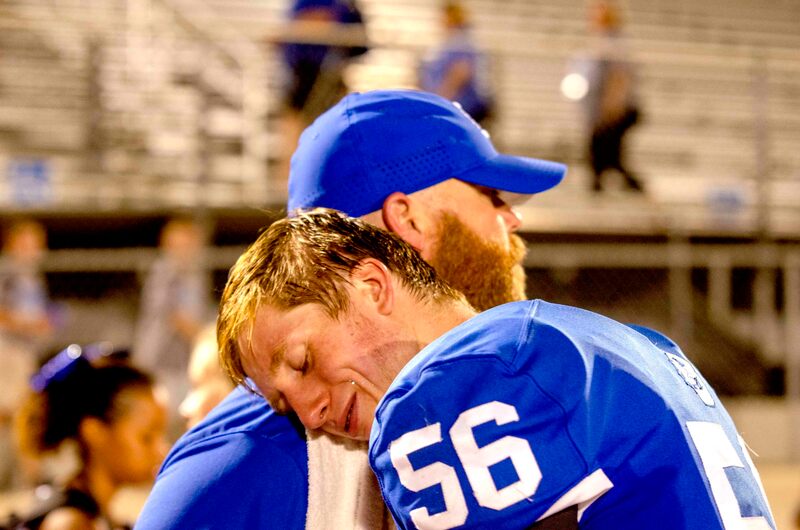 The Bandera Bulldogs will make the long trek south tonight to face the Crystal City Javelinas.
The Javelinas are ranked 69th in 4AD2, but don’t let that fool you, they are 2-1 with wins over Zapata and Laredo Cigarroa, and will be the best all-around team the Bulldogs have seen so far in non-district play.
Defensively, CC has allowed just 50 points against, including a 22-0 shutout against Cigarroa last time out.
Bandera put itself in position to possibly get to that 5-0 mark with a 35-12 Homecoming win over the Comfort Bobcats last Friday.
As a standing room only crowd looked on with 8:14 left in the first quarter, Bulldog QB Solomon MacNeil found Tommy Cardenas behind the Comfort secondary for a 33 yard score. Bulldog Special Teams Player of the Week, Blaise Salazar, made his first of five PATs to make it 7-0.
Salazar has stepped up his game after a slightly shaky start earlier this season.
MacNeil later found a wide open Mason Phair for a 26 yard catch with 3:22 left for the Bulldogs second score of the night. It would be the first of three scoring receptions for Phair. Salazar was good on the point after to make it, 14-0.
The second quarter was scoreless, but things would pick up in the second half.
After Gage Brown blocks a Comfort punt, with 4:08 left to go in the third, MacNeil hands off to Gunnar Brown who passes it to Phair for a 33 yard score. After the PAT, it was 21-0 with the Bulldogs looking for a shutout.
The Comfort defense ended that chance for a shutout early in the fouth quarter.
The Bobcats calmed the Homecoming crowd as they scored two touchdowns in 3:04 to tighten the game up at 21-12.
The first score came on a hit as MacNeil was setting up to pass and the ball rolled away from the pile, allowing a Bobcat to pick it up and score.
Later, Comfort would score on a three yard rush after a short drive. The PAT failed after both scores.
The Bulldogs weren't finished yet as Phair collected a 10 yard pass to score and Salazar made it 28-12 after a good kick with 3:07 left in the game.
Looking to run out the clock, Bandera had to run the clock and the idea was to run MacNeil to lessen the chances of a bad exchange, The "bigs" up front for the Bulldogs opened a hole for the Bulldog QB to motor 78 yards and score with 43 seconds left to play. Salazar trotted out and made the kick with room to spare, to drive the score to 35-12.
Bandera finished the night with 355 yards of offense,  140 passing and 215 on the ground, while accumulating 15 first downs.
Defensively, the Bulldog Wrecking Crew kept Comfort limited to 229 total yards, 166 passing and a meager 63 on the ground. The Bulldogs put pressure on the Comfort backfield all night, ending up with five sacks as well as numerous tackles for loss behind the line of scrimmage.
Gunnar Brown and Garrett Meier were named as Co- Defensive Players of the Week.