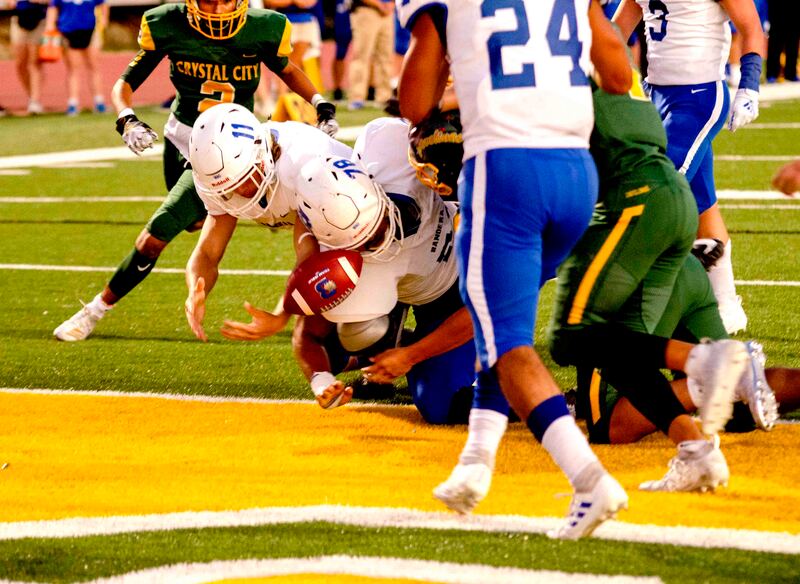 Gunnar Brown (11) scored on this two yard rush. Officials said he had broken the plane of the goal line before the ball was jarred loose. 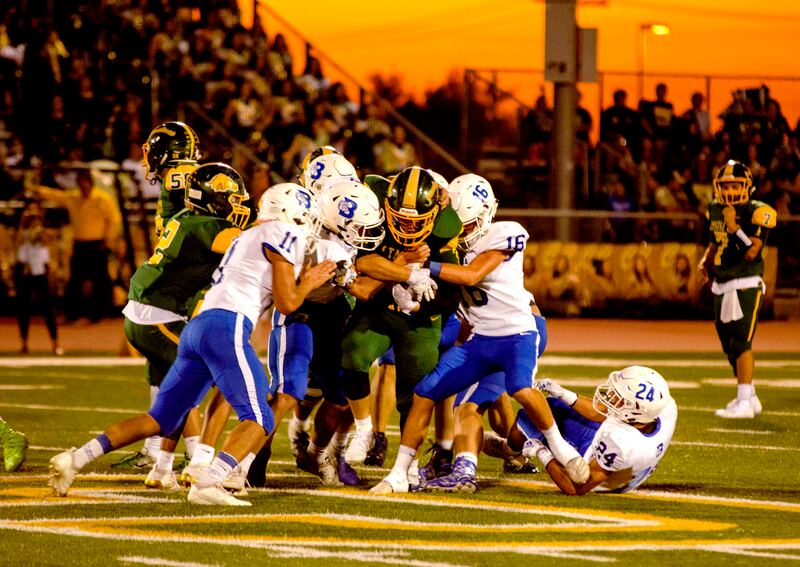 Under a setting sun, the Bulldogs defense surround a Javelina ball carrier. The Bulldogs limited Crystal City to 100 yards rushing on the night. 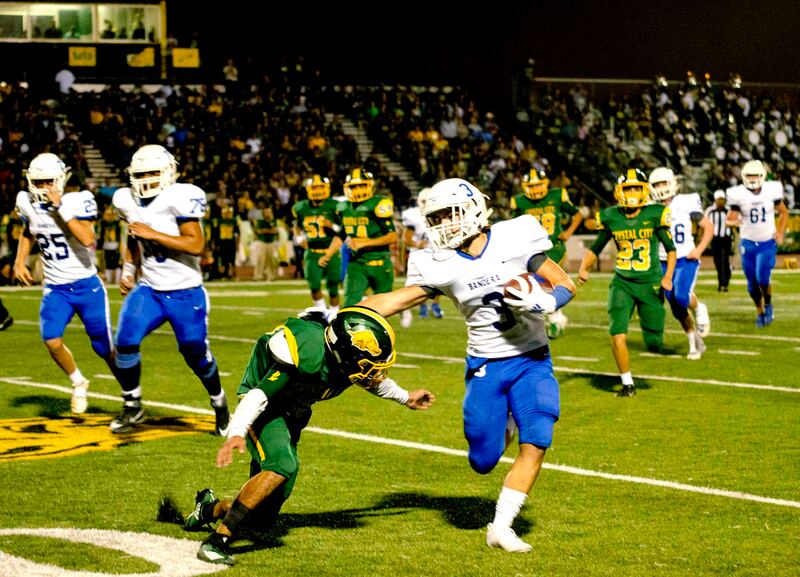 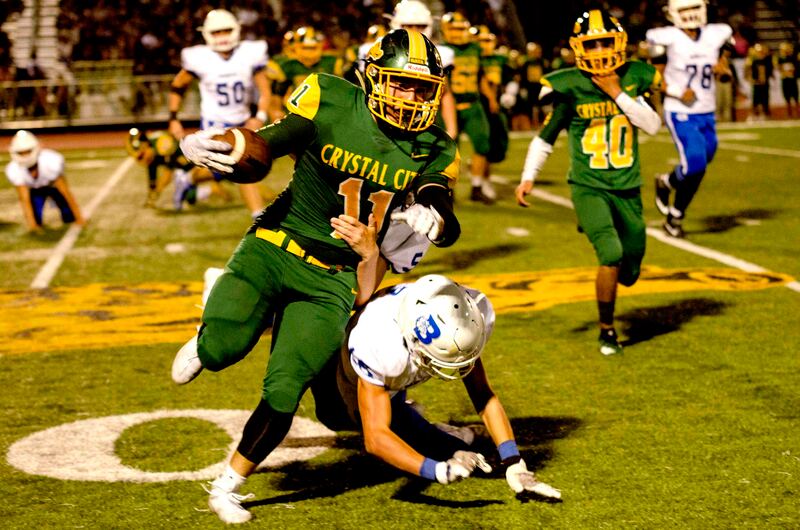 Two Bulldogs try to drag down the Javelina's Justin Bonilla. 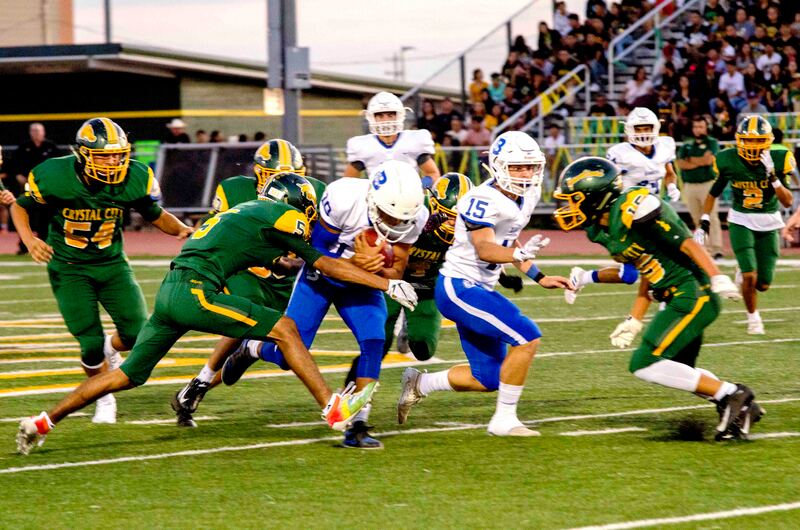 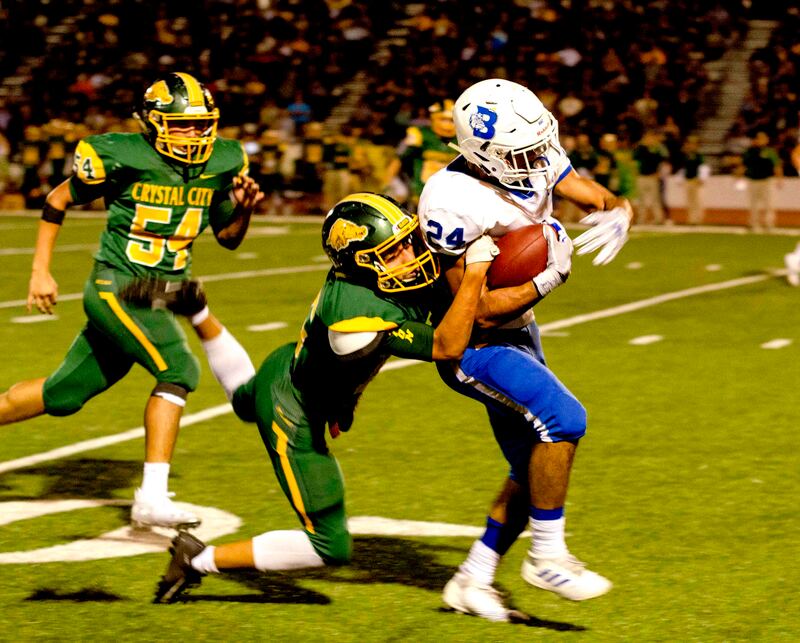 Tommy Cardenas runs for some of his 76 yards against Crystal City. 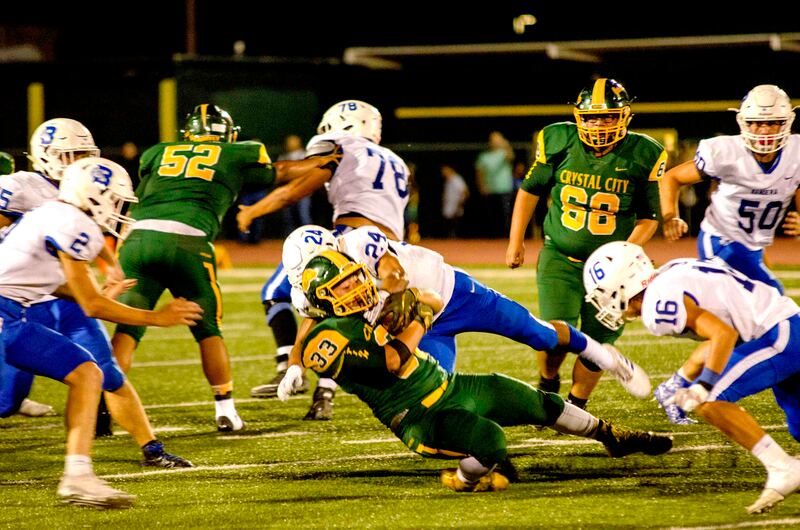 Tommy Cardenas (24) puts a hit on Nathan Delgado. Cardenas was named as one of two Defensive Players of the Week. 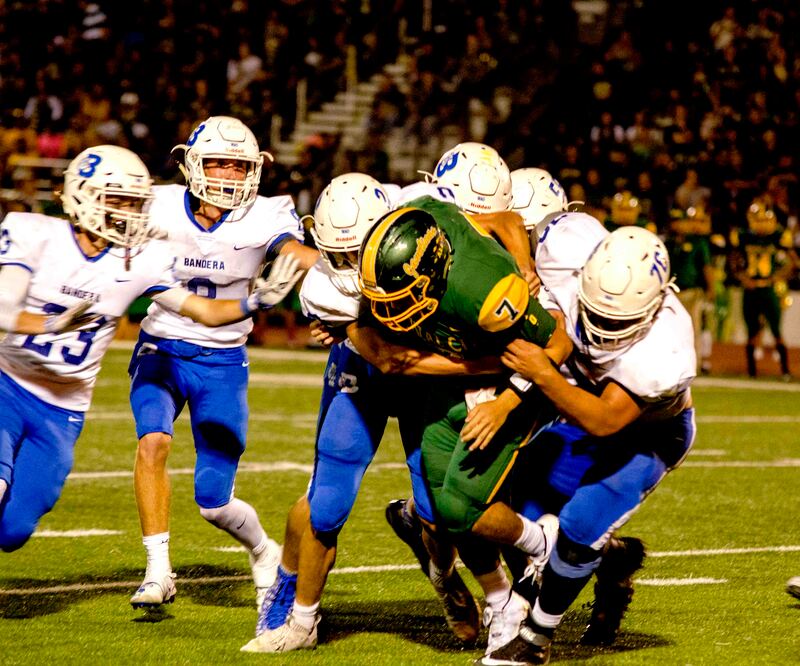 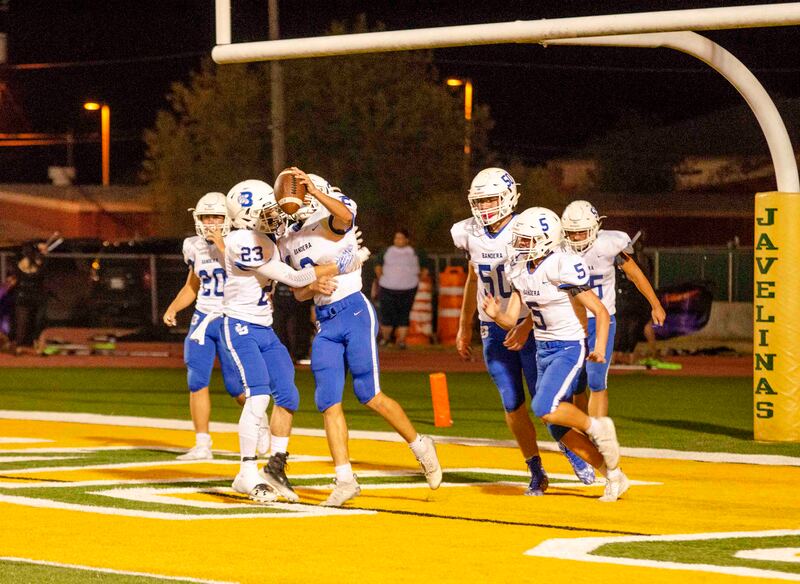 The Bandera Bulldogs are one of nine unbeaten teams left in Region IV, Class 4A-D2, after a 24-7 victory over the Crystal City Javelinas Friday night.
The Bulldogs brought their run game to Crystal City with a steady diet of QB, Solomon MacNeil and RB, Tommy Cardenas, crashing the line of scrimmage time after time. Along with Brock Johnson and Gunnar Brown, Bandera racked up 199 yards rushing behind the Bulldogs much improved offensive line, led by Lineman of the Week, Colton Perkins.
Bandera scored with 8:59 left in the first quarter on  Gunnar Brown's only carry of the night, a two yard rush. Salazar's kick made it, 7-0.
After a Cardenas interception at the 40 and return to the Crystal City 23, a personal foul on a Javelina, gives Bandera a first down on the 11.
MacNeil, who went 1 for 3 on the night, completes his only one, a five yard scoring toss over the middle to Mason Phair, with 6:28 left in the quarter and Salazar's PAT made it, 14-0.
Crystal City's only score came at the end of an extended drive on an short rush in the second quarter with 9:27 left, and a good PAT made it, 14-7, Bandera. The rest of the quarter was scoreless.
Clock management was the name of the game for Bandera in the third. With the Bulldog offense chewing up the clock with a steady diet of rushes and moving the chains, the Javelina defense was wearing slowly wearing down. Bandera was threatening to score and inside the 10, but Crystal City intercepted a MacNeil pass on a fourth and six for a touchback.
Salazar opened the fourth quarter scoring with a 24 yard FG to make it 17-7 with 5:56 left in the game.
Just a little over a minute later, Gage Brown gave the Bulldogs some breathing room when he scooped up a Crystal City fumble after a hit by Ian Short, and found the end zone 43 yards later.
Salazar's final kick of the game makes it 24-7 with 4:45 left.
The Bulldog "Wrecking Crew" defense held Crystal City to just 100 yards on the ground on 42 rushing attempts and gave up a scant 11 yards through the air. After a few halftime adjustments, the Wrecking Crew didn't allow the Javelinas a first down in the  last two quarters.
Cardenas and Gage Brown were named Co-Defensive Players of the Week.
Bandera's kicking game was very involved again this  week as Special Teams Player of the Week, Christian Gonzalez, booted four kickoffs into the end zone and Salazar added six points to his season totals with those three PAT's and the short FG.
Looking ahead, five of the six teams in District 13-4AD2 will take a bye this coming week with the only exception being Austin Eastside, who plays St. Anthony.
Effectively, everyone's record is 0-0 to start the "second season" aka district, that starts in nine days.
Bandera visits Cuero to start district and even though the Gobblers are 1-4, you can bet they will be ready.
Cuero graduated a large number of players (18) after their state championship season last year, and have just eight starters from that squad returning.
Much like Bandera, Cuero keeps their athletes on the field, playing both ways. Players to watch are Kobe Giles, Storm Dromgoole, Jackson Hardwick and Joe Cardenas.
Kickoff is scheduled for 7:30 p.m., plan a roadtrip to support the Bulldogs!