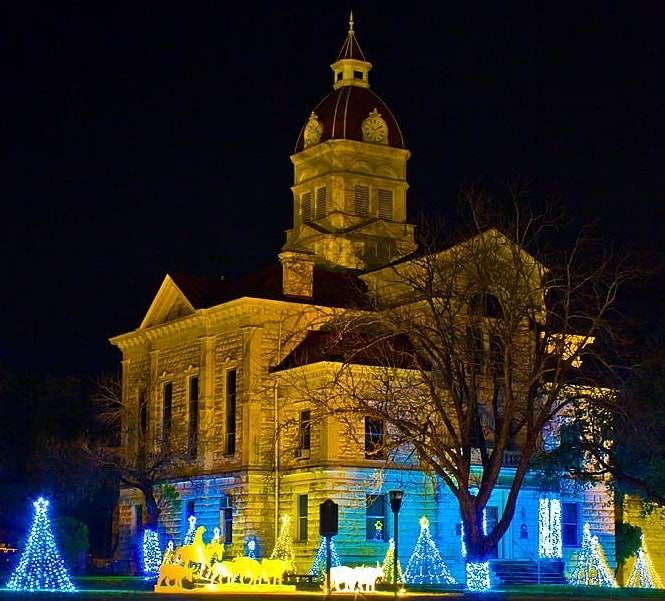 Trying to keep the tradition of Christmas lights on Main Street alive, Bandera County Commissioner Jack Moseley has taken upon himself the task of assembling a crew. Plans are already underway to set up the holiday twinklers at the City Park, but no one has volunteered to decorate the courthouse lawn.
In the past, the lights - bought and owned by the city’s Economic Development Corporation - were set up by the Bandera Business Association. Snuffed out because the cost to set up was too high, the BBA returned the lights to the EDC two years ago.
This year, the Bandera County Boys and Girls Club, with help from Heather and Steve Jones of Zoka Jo's, has stepped up to the plate, offering to set the lights up along the river, as they have been in years past, for motorists to drive through.
The EDC approved a $5,000 budget to replace burnt out bulbs for the City Park display, and designated to the county enough lights to illuminate the Nativity scene and 19 trees (six small, six medium, six large and one giant) on the courthouse lawn.
Moseley said he asked the court to set aside funding for extra bulbs and extension cords, and he said the Chamber of Commerce and BBA (Bandera Business Association) would also contribute, however no one has offered to donate their labor.
"It has gotten too expensive for any one entity to do the lights. There are no plans for the courthouse lawn,” Moseley said. “I live close to Medina, so I only see the lights a couple of times at night the whole time they’re set up. I really don't see the lights often, but I think we need them on the courthouse lawn. It’s a big deal to the community.”
Moseley said he has $750 in grant money, but that doesn’t come close to what labor has cost in the past - ranging from $12,000 to $18,000 he said. The commissioner said he’s looking for reliable volunteers who have the Christmas spirit and are willing to pull up their sleeves beginning the Friday before Thanksgiving.
“In the past, setting up the courthouse has taken a week. My thought was if we get enough people, we can complete it in a couple of days,” Moseley said, adding he would like to see the effort continue as an annual community event.
Setup for the lights in City Park is expected to begin around Nov. 1, to be ready the weekend after Thanksgiving.
For those interested in helping set up the lights on the Bandera County Courthouse lawn, call Moseley at 830-522-1500 or email jmoseley@banderacounty.org and please include a return phone number, or call Heather at the Bandera County Chamber of Commerce at 830-796-3280.