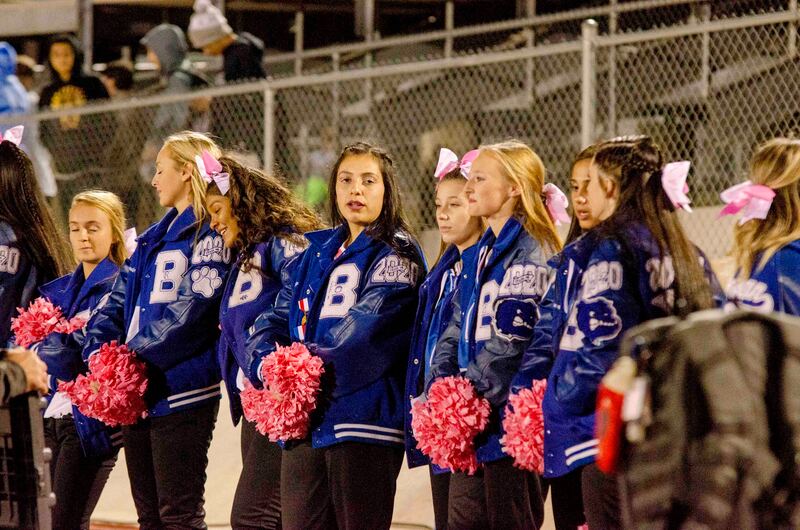 Cooler temps had the Bulldog Cheerleaders all bundled up before the game. 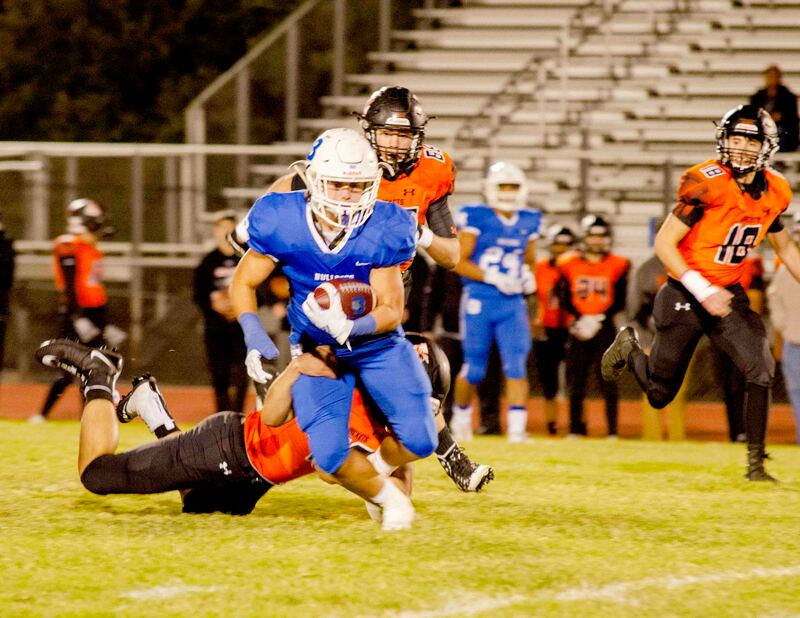 Brock Johnson ran hard and scored once for the Bulldogs Friday night. 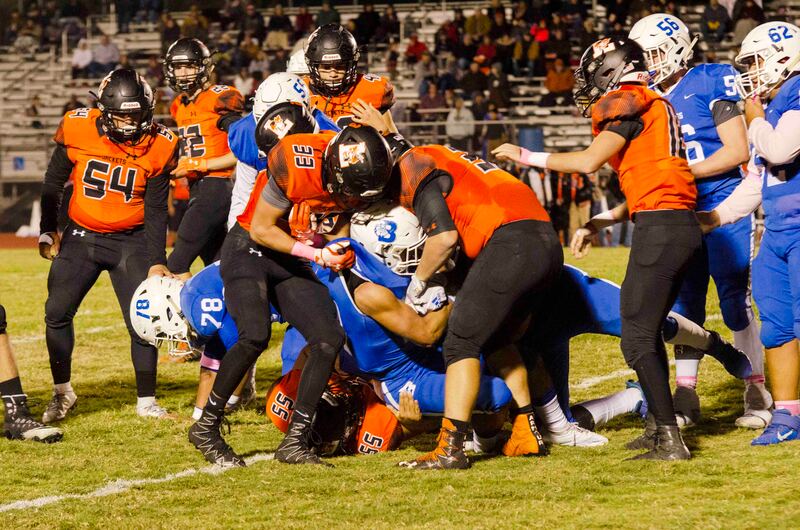 Tommy Cardenas (middle of pile) also found some hard spots running against Llano. Cardenas ended up with 141 yards rushing for the night. 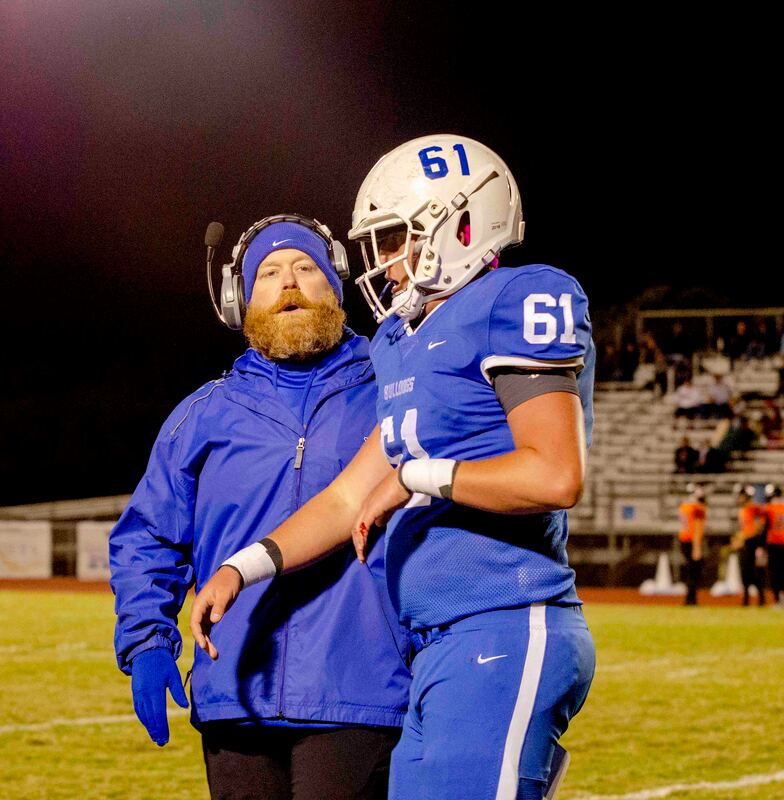 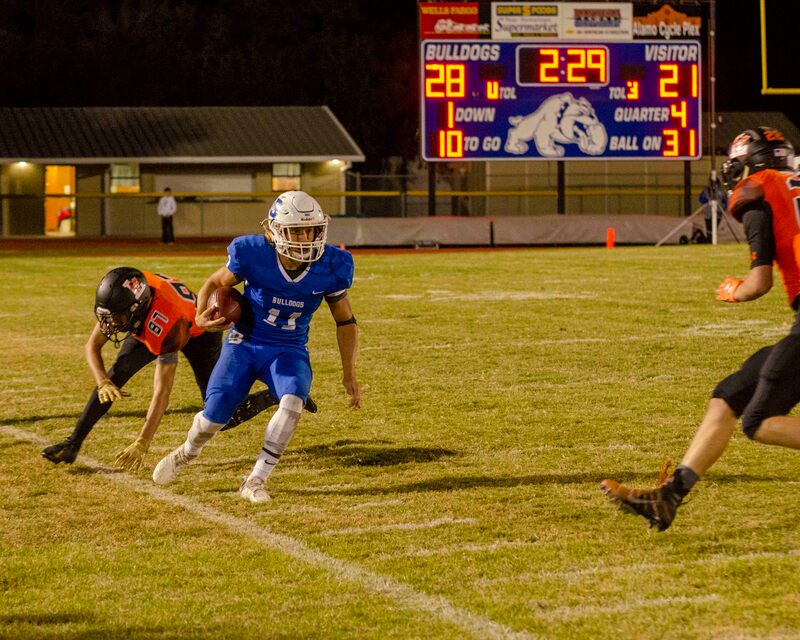 Bandera QB, Gunnar Brown, walks the tightrope down the sideline against Llano. 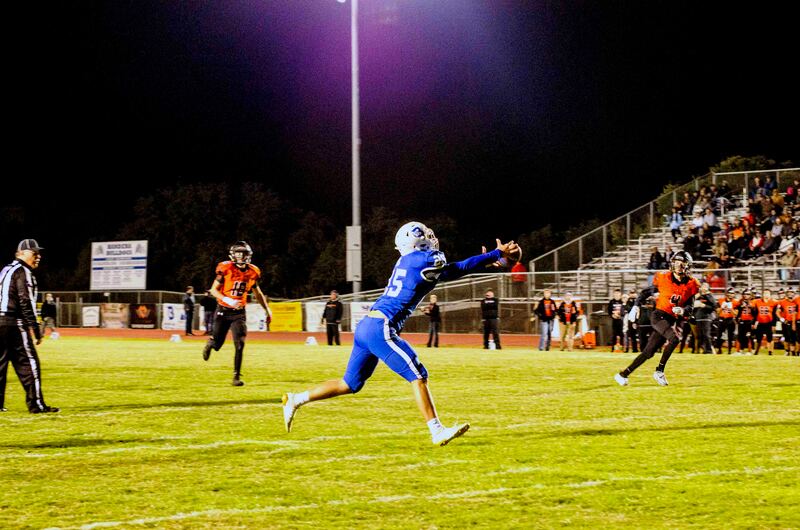 This touchdown reception by Mason Phair was called back due to a flag. 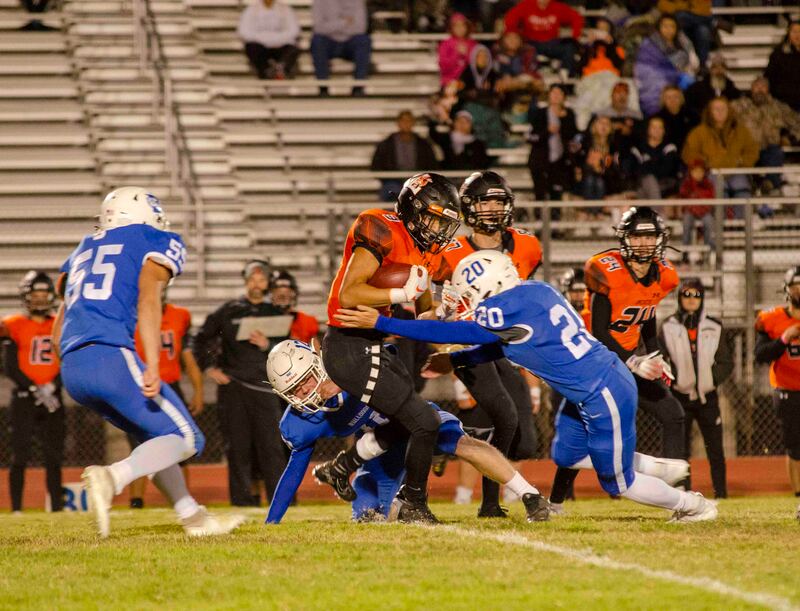 Garrett Meier (20) makes a stop on a Llano ballcarrier with help from a teammate. 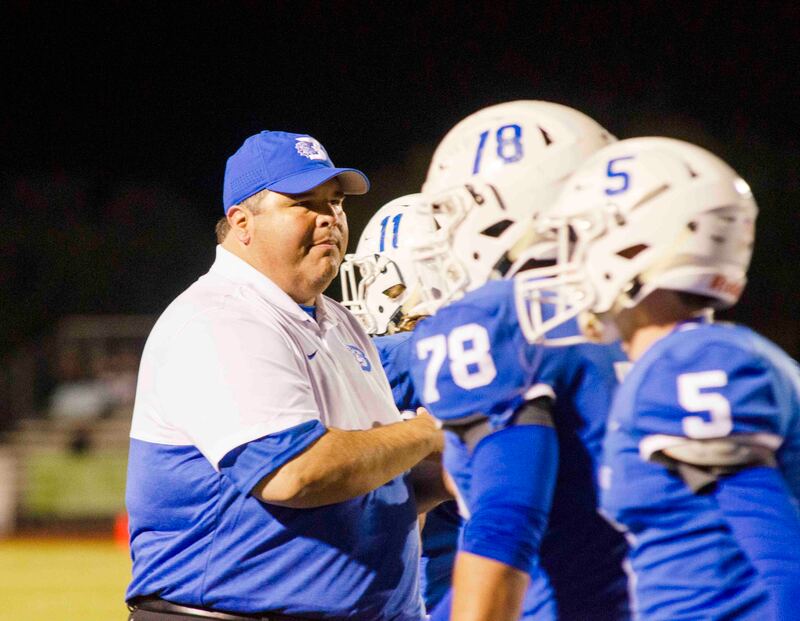 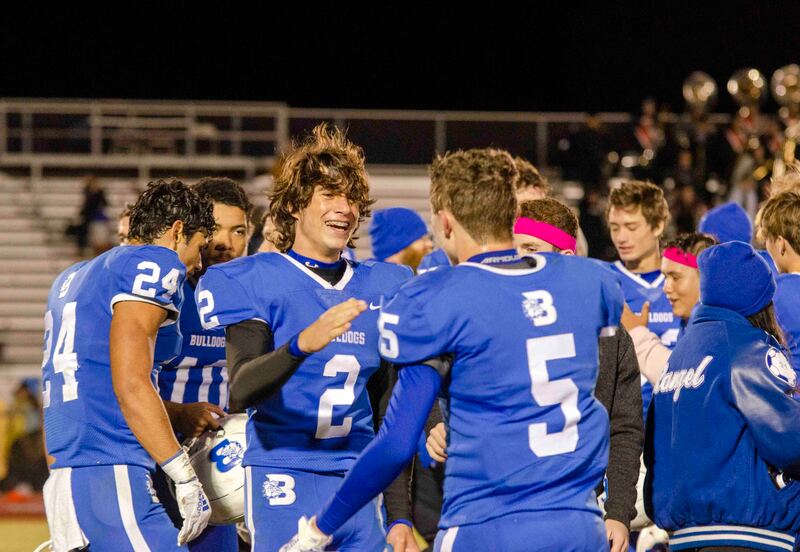 Gage Brown (2) and Tyler Moore (5) congratulate each other on a job well done. 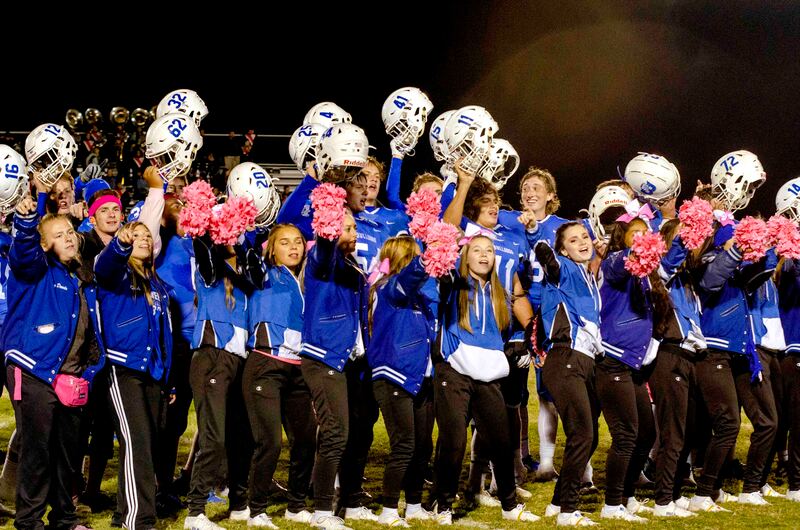 Players, cheerleaders and trainers salute the home crowd after the 28-21 victory on Llano.

The Bulldogs travel to Austin tonight to take on the 0-8 Austin Eastside Memorial Panthers.
The Panthers are coming off of a 69-0 loss to Cuero last week. They have 14 starters from last season returning and even though they have had a rough two seasons in district with eight straight losses and are currently 0-8 overall, they do have their moments.
"We have spent this week just like any other, preparing for the next team we are going to face. We are glad to put a product out there Bandera can be proud of, tough hard working kids getting the job done. Hopefully the crowd will continue to support us, its been a factor in us winning and it's been great," coach Joel Fontenot-Amedee said.
Kickoff is set for 7:30 p.m. in Austin at Nelson Stadium, located at 7105 Berkman Drive.
Bandera's Bulldogs overcame quite a bit in Friday night's edge of the seat contest against Llano.
After having two touchdowns negated by penalties, the voluntary removal of a field goal from the scoreboard and a pesky Yellowjacket team, the Bulldogs returned to the win column and moved to 7-1 on the season.
Coming into the game, coaches and players knew this would be a pivotable game for district seedings in the playoffs, and there was a good chance the winner would get the third seed.
The Yellowjackets made a statement early in the first as they for pay dirt within the first three minutes of the game on a 39-yard pass and a good PAT made it 7-0.
Not to be outdone, the Bulldogs scored in even less than three minutes later to make it 7-7 after a Tommy Cardenas 45 yard sprint to the endzone and a Blaise Salazar point after with 7:13 left in the first quarter.
The Bulldogs would have their first of two touchdowns taken away when Mason Phair scores untouched and then is flagged with 1:53 left in the first.
"We line up in quite a few formations and move our receivers around a bunch. In this case, Phair was covered up, making him ineligable and it cost us," Fontenot-Amedee said.
Llano would score early in the second after a Bulldog turnover and a good kick put Llano ahead 14-7 with 9:24 left.
Bandera answered with a short Cardenas rush and a Salazar kick would tie the game with 5:49 left in the half.
After a failed Llano FG attempt, the Yellowjackets intercept a Bulldog pass on the Bandera 35 that led to a 26-yard score with 22 seconds left in the half. The kick gives Llano a 21-14 lead and when it looks like things are settled for the half, the Bulldogs had a second touchdown erased for the night.
Cardenas takes the kickoff 83 yards to score with just six seconds left in the half, but a holding call way behind the play at the 50, takes the points off the board and the teams hit the locker rooms for halftime.
The Bulldog "Wrecking Crew" defense stepped up after some adjustments, holding Llano scoreless in the second half, giving the offense a chance to do work, and do work is what they did.
"I am pleased with our senior leadership, we just keep going, we don’t stop and complain. We have made great half time adjustments, we are playing four full quarters and wearing out some teams in the second half, thats a testament to our guys. We are finishing up as strong as we are starting in these games," Fontenot-Amedee said.
Things got real interesting late in the third, starting with a punt block by Liam DeMarchi along with a facemask penalty against Llano, setting the Bulldogs up in good field position on the Llano 38.
Working downfield, the Bulldogs make it inside the 10. but can't punch it in, so Salazar comes out to attempt a field goal.
The kick is good to make it 21-17, but a flag on the field signifies a Roughing the Kicker call against Llano with 1:40 left.
The Bandera coaching staff wasted little time to elect taking the points off the board, as the penalty gives the Bulldogs a full set of downs inside the 3 yard line.
Brock Johnson scores to make it 21-20 and the roughed up Salazar makes the extra point, tying the game at 21-21 with less than a minute left in the third.
With the Bandera defense holding their own, the Bulldog offense works an extended drive downfield  late in the game and QB Gunnar Brown scores on a one yard rush, giving Bandera their first lead of the night with 5:51 left in the game. Salazar's fourth PAT makes it a 28-21 final.
Bandera held Llano to 218 yards of offense on 10 of 23 passing for 152 yards and 66 yards rushing on 25 attempts.
"We have handled the ball pretty good this year, but two of Llano's score came off of turnovers. We took a couple of chances, but Llano is a good ball team. It was a phenomenal win for us," Fontenot-Amedee said.
Box score
1   2   3   4   Final
Llano              7  14  0   0   21
Bandera          7   7    7  7   28
Bandera stats:
Passing_ Gunnar Brown, 5-11-87-1-0, Cardenas, 0-1-0-1-0
Rushing_ T. Cardenas, 25-141, Gunnar Brown, 13-67, Brock Johnson, 8-25
Receiving_ Cardenas, 4-71, Tyler Moore, 1-16
Tackles_ No stats available
Assists_ No stats available
Players of the Week:
Offensive Lineman_ Zak Widenor
Defensive_ Gage Brown and Trace Decker
Special Teams_ T. Cardenas
The Bandera Prophet is grounded on the premise that relevant news delivery is ever-evolving. Founded by newspaper veterans, the Prophet delivers up-to-date information by writers and photographers who combined have 50-plus years of experience in the field and newsroom. Completely free to readers, the Prophet is published on multiple platforms, and shared within the online community. No paywalls and no paid subscriptions
make news, sports, feature stories and more immediately available with one click of a button or one swipe on a keypad.
All content copyright property of The Bandera Prophet