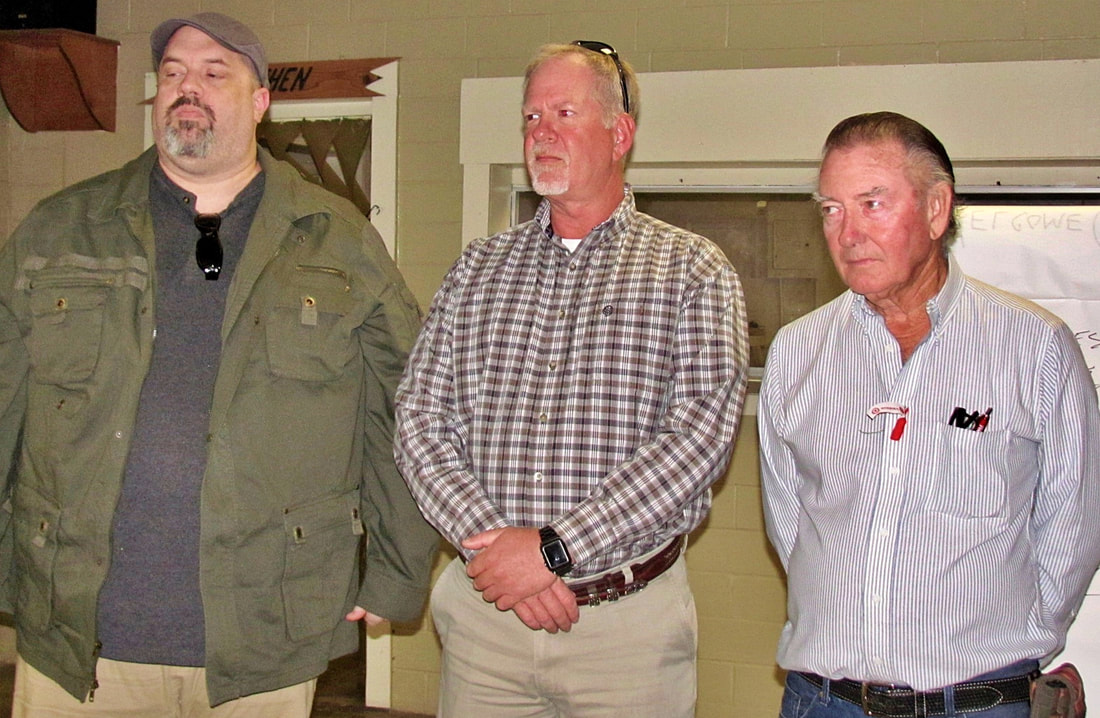 Three of the newly elected officers of the Lakehills EMS Support Team stand to be sworn in for immediate duty. On the left is Secretary/Treasurer Todd Yates, in the center is President Alex Hicks, and on the right is two-year Director Doug Franks.

The Lakehills EMS Support Team held a general membership meeting on Nov. 9 after the EMS Open House. It turns out that every person who lives in the Lakehills area is a member of the team and about 50 people came to the Lakehills Civic Center to attend the meeting.
The organization was formed in 1985 and is incorporated as a 501(c)3 non-profit corporation. There are no dues although donations are gratefully accepted. The board consists of president, vice president, secretary/treasurer, and two directors. The president, secretary/treasurer and one director serve two-year terms, while the vice president and one director each serve one year.
During the year the board meets monthly and membership meetings are held bi-monthly, on the third Thursday of the month, at 7:30 p.m., in the Civic Center.
The annual meeting is held in August each year and that is when officers are usually elected. However, due to the open house, the official start of the newly renovated EMS station, the purpose of this meeting was to elect new officers to replace the current, temporary officers.
The results of the election established new officers, whose duties began immediately. The president is Alex Hicks; vice president is Ben Hicks; secretary/treasurer is Todd Yates; two-year director is Doug Franks; and one-year director is Jerry Van Zandt.
The Lakehills EMS Support Team’s address is P. O. Box 524, Lakehills, TX 78063.
​
The Bandera Prophet is grounded on the premise that relevant news delivery is ever-evolving. Founded by newspaper veterans, the Prophet delivers up-to-date information by writers and photographers who combined have 50-plus years of experience in the field and newsroom. Completely free to readers, the Prophet is published on multiple platforms, and shared within the online community. No paywalls and no paid subscriptions
make news, sports, feature stories and more immediately available with one click of a button or one swipe on a keypad.
All content copyright property of The Bandera Prophet