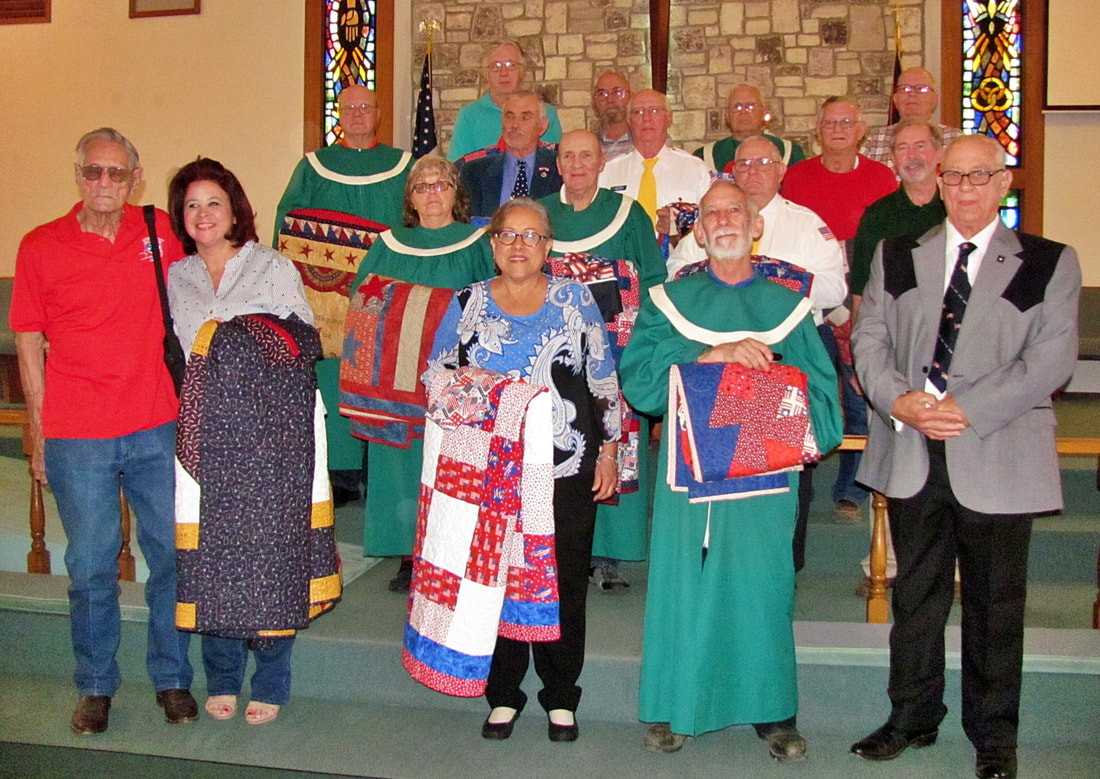 The veterans of Lakehills United Methodist Church were honored to receive special quilts at the church service on Nov. 10.

Eighteen veterans were honored during the late service at Lakehills United Methodist Church on Sunday morning, Nov. 10. They were each given an Honor Quilt lovingly handmade by many ladies from the church and from the community.
The veterans are all members of the church and represent the Navy, the Army, the Air Force, and the Air National Guard. The oldest served in World War II. Two are women. Three served stateside and the rest were deployed to Viet Nam, Desert Storm, Kuwait, Iraq and Enduring Freedom at various times.
In alphabetical order, the honorees are: Dan Alanis, Army; Bob Blakemore, Air Force; Dave Calder, Navy; Jeanette Drenner, Army Nurse Corp; Ben Hicks, Air Force; Floyd Hicks, Navy; Chuck Johnson, Army; Sam Martin, Air Force; Chris Organ, Air Force; Stanley Phillips, Army Air Corp, the 94 year old WWII veteran, who recently returned from an Honor Flight to Washington, DC; Barbara Roach, Navy; John Rodgers, Air Force; Dale Rudd, Air Force; Dennis Schirmer, Navy; Mike Stroud, Air Force; Jack Trenkelbach, Army; Johnny Tymrak, Army; and Tom Walton, Air Force.
As wives of two of the veterans, Loy Ed Alanis conceived the idea to honor the church’s veterans with quilts and Lois Tymrak ran with it. They enlisted the help of many women from the area to make the quilts.
The quilts are all official Honor Quilts and are registered with the Texas Chapter of the national non-profit organization Quilts of Honor.
Quilts of Honor officially began in 2010 and has its headquarters in California. It has branches all over the country and the Texas branch is based in San Antonio. The website is quiltsofhonor.org and they can be found on Facebook.
Every quilt is numbered and registered and carries a label showing who made the quilt and who received it.
The organization is “dedicated to providing healing, loving quilts to whose who have served in harms way protecting our freedoms.” It is their way of saying thanks with “quilted hugs of gratitude.”
After the service, the church provided a meal for the veterans and their families and for all who attended the ceremony.
​
The Bandera Prophet is grounded on the premise that relevant news delivery is ever-evolving. Founded by newspaper veterans, the Prophet delivers up-to-date information by writers and photographers who combined have 50-plus years of experience in the field and newsroom. Always free to readers, the Prophet is published on multiple platforms, and shared within the online community to more than 150,000 people. No paywalls and no paid subscriptions make news and feature stories immediately available with one click of a button or one swipe on a keypad.
​
All content copyright property of The Bandera Prophet