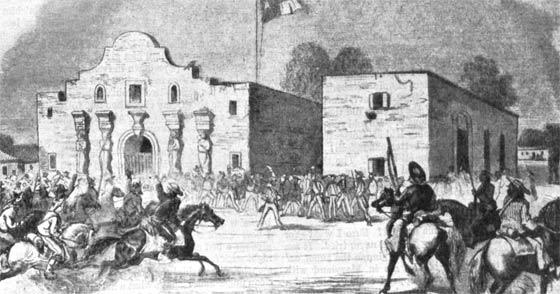 As the renovation of Alamo Plaza dominates the news today, it is interesting to look back on how the news of the actual battle at the Alamo played out across the country in 1836.
As we are bombarded by news 24 hours a day, it is hard to imagine how precious receiving news was in earlier times. Newspapers were the primary means of communicating current events in the early 1800s. News of the Battle of the Alamo captured the country’s imagination as newspapers reported the valiant fight of the Alamo defenders.
The National Banner and Nashville Whig reported on April 8, 1836: “The most painful excitement was occasioned in this place on Wednesday by a rumor that the fort at St. Antonio, in possession of the Texans, had been stormed by the Mexican army and the garrison put to the sword. Yesterday the news, even in its most revolting features, was fully confirmed. They were all slaughtered! Our late fellow-citizen, Col. David Crockett, it will be seen, was among the slain.”
The special mention of Crockett suggests he was already a celebrity at the time of his demise.
The March 29, 1836 edition of the New Orleans’ True American shows how news traveled across the country, “We learned by the passengers of the [Schooner] Comanche eight days from Texas that the War has assumed a serious character – on the 25th Feb. the Texan Garrision of Bexar of 150 men, commanded by Lt. Col. B. Travis, was attacked by the advance division of Gen. Santa Anna’s army consisting of 2000 men who were repulsed with the loss of many killed, (between 500 to 800 men) without the loss of one man of the Texans. About the same time Col. (Frank) Johnson with a party of 70 men while reconnoitering the westward of San Patricio was surrounded in the night by a large body of Mexican Troops. In the morning, the demand of a surrender was made by the Mexican Commander...but no sooner had the Texans marched out of their quarters and stacked their arms, that a general fire was opened upon them by the whole Mexican force – the Texans attempted to escape but only three of them succeeded; on of who was Col. Johnson.”
News was often acquired through several sources, some second-hand or even third-hand, that meant the accuracy of the news could suffer.
On display in the Frontier Times Museum, is the journal of an unknown diarist living in Geneva, New York. The diary, found in a second-hand store in San Angelo in 1913, was kept throughout the years of 1835, 1836 and 1837.
Among the daily entries is one dated April 16, 1836 in which the diarist wrote, “Sad news from Texas. The garrison at Bexar consisting of 182 men under Colonel W. B. Travis entirely destroyed after a most gallant defense against the Mexicans….”
While the entry was 40 days after the Alamo was taken, it shows that the eyes of the country were indeed turned towards Texas.
The Bandera Prophet is grounded on the premise that relevant news delivery is ever-evolving. Founded by newspaper veterans, the Prophet delivers up-to-date information by writers and photographers who combined have 50-plus years of experience in the field and newsroom. Always free to readers, the Prophet is published on multiple platforms, and shared within the online community to more than 150,000 people. No paywalls and no paid subscriptions make news and feature stories immediately available with one click of a button or one swipe on a keypad.
​
All content copyright property of The Bandera Prophet