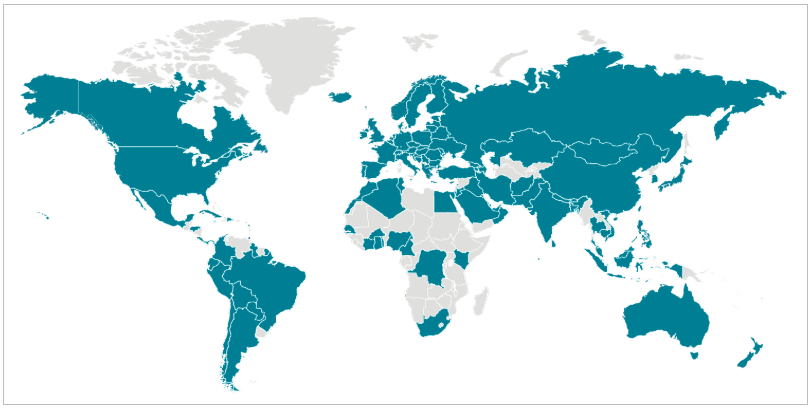 A global map of the countries where COVID-19 has been confirmed.

The Greater Medina Lake Little League has postponed its season as a precautionary measure against COVID-19.
“We have received direction from Little League International that we should suspend all league activities until after April 6 out of an abundance of caution,” the league wrote yesterday evening on Facebook.
A GMLLL officer told the Prophet that the league has put everything on hold temporarily as they wait for additional guidance.
“We are just asking parents to be patient with us while we get direction from the [school] district and stand by for more information in this shifting schedule,” the officer said.
The Bandera Little League is discussing different options, league officers said.
Commissioners yesterday addressed certain fears about the virus, saying Bandera County is “so far, so good.”
“We have a plan in place. Hopefully it doesn’t happen, but we’re prepared.” County Judge Richard Evans said. “Wash your hands, stay away from crowds, don’t shake hands.”
Emergency Operations Coordinator Carey Reed said she is closely following the DSHS (Department of State Health Services) Region 8 local health authority.
“The plan is to do what we’re doing,” Reed said.
In the event that a vaccine is released, Reed said it would be distributed to all county residents. She said Bandera County emergency services practice the POD (Point of Distribution) exercise annually, and they know what to do.
“We are set up for if and when a vaccine becomes available,” Reed said. “The FDA has a lot of loops and hoops they have to jump through. The president has removed a lot of the red tape for medications. I’m hoping that will speed this process up.”
Reed said as of yesterday, Texas had no travel restrictions and no recommendations of precautionary measures.
“Unless you’re sick, over 60 or have underlying health issues,” Reed said. “If you’re feeling sick, stay home.”
Reed also cautioned against relying totally on hand sanitizer as a preventive measure for spreading or contracting the virus.
“Use hand sanitizer until you can get to a facility and wash with soap,” Reed said. “Hand sanitizer kills the virus, but it opens pores, which makes you susceptible to more viruses.”
She added COVID-19 exists on metal surfaces for 12 hours, and can survive longer on clothing fibers.
As of March 12, the Centers for Disease Control and Prevention reported 1,215 confirmed cases and 36 deaths in the U.S. among 42 states and the District of Columbia. Globally, 134,768 cases of have been confirmed. Although at least 32 cases are in Texas, none have been confirmed near Bandera. The closest major cancellation thus far is South by Southwest in Austin, a 10-day international event which was set to launch today.
“Go visit the CDC site,” Reed said. “Do not listen to the craziness about how terrible it is.”
Also, Bandera County residents may sign up for alerts on the county website, www.banderacounty.org. Under “Notices,” click on STRAN (South-Central Texas Regional Alert Network). The alert system sends notifications for emergency preparedness, as well as burn ban, office closure and sheriff’s office notices. ​
The Bandera Prophet is grounded on the premise that relevant news delivery is ever-evolving. Founded by newspaper veterans, the Prophet delivers up-to-date information by writers and photographers who combined have 50-plus years of experience in the field and newsroom. Always free to readers, the Prophet is published on multiple platforms, and shared within the online community to more than 150,000 people. No paywalls and no paid subscriptions make news and feature stories immediately available with one click of a button or one swipe on a keypad.
​
All content copyright property of The Bandera Prophet