Newly elected officers of the Bandera American Legion Post 157 and Auxiliary Unit 157 took their oaths of office July 22, during the annual installation of officers ceremony. Joey Bess and Kim Terry, the commander and president, respectively, of the 21st District of the American Legion presided.
Despite the COVID-19 restrictions, an enthusiastic but limited group of officers and their families, enjoyed a Cajun meal served “to go” style by 2020 college-bound graduates of Medina High School, A.J. Crowther, and Bandera High School, Dominique Sadler. The annual installation of officers ceremony publicly formalizes the commitment made by each individual to the organization and their specific role. The Auxiliary installation was followed by the American Legion’s and both were led by the leadership of the 21st District Commander Joey Bess, and President Kim Terry. This district is comprised of 15 Auxiliary units and 20 American Legion posts in the Hill Country.
The mission of the American Legion Auxiliary is to “support The American Legion and to honor the sacrifice of those who serve by enhancing the lives of our veterans, military, and their families, both at home and abroad.” The oath of office was taken by President Gerda Weathers, Vice-President Sandy Pevateaux, Secretary Linda Porter, Chaplain Patti Kankelfitz, and Sgt-At-Arms Louise Avent.
The annual Auxiliary Unit 157 scholarship of $500 was presented to Alexis (A.J.) Crowther.
“I thought I was here to volunteer and support the event… I really appreciate this” said a surprised A.J.
In addition to a heartfelt essay, her academics, extracurricular leadership and community contributions sealed the win. Armed with her C.N.A., she will continue nursing studies at the University of Mississippi.
The American Legion Post 157 Commander’s gavel was presented to the new Commander Susan Junker, after she and the slate of newly elected officers committed to the responsibilities of their offices. The 2020-2021 leadership team includes 1st and 2nd Vice Commanders Mike Bankston and Bill Cox, Adjutant/Service Officer Dennis Birchall, Finance Officer Mike Invergo, Chaplain Chris Dion and Members-At-Large Ken Guest, Gary Noller, Tom Phillips and Darryl Sadler. They form the Executive Committee responsible for translating the American Legion mission focused on veterans, defense, youth, Americanism and communities into the Post’s annual priorities and events.
The American Legion is open Wednesdays from 10 a.m. to 4 p.m. The hall at 205 12th Street and welcomes viewing of the military models, uniforms and equipment, turn-in of unserviceable U.S. flags, register to vote, request assistance with benefits and enjoy a cup of coffee too.
The Wednesday Veterans Coffee will begin in August at 10 a.m.
For more information call 830-796-7528 or Commander Junker at 210-788-9160. ​ 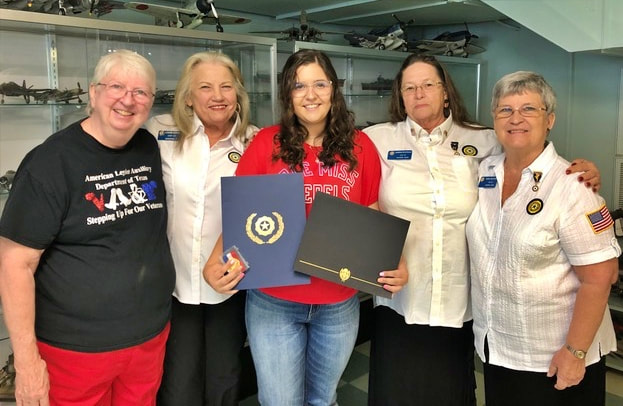 A.J. Crowther (center), Medina High School Class of 2020, is surprised by the Bandera American Legion Auxiliary Unit 157 with a $500 Scholarship during their July 22 Installation of Officers. Pictured are (left to right) Chaplain Patti Kankelfitz, Sgt-At-Arms Louise Avent, A.J., Vice President, Sandy Pevateaux, and President Gerda Weathers. Newly elected Secretary/Treasurer Linda Porter was unable to attend.
The Bandera Prophet is grounded on the premise that relevant news delivery is ever-evolving. Founded by newspaper veterans, the Prophet delivers up-to-date information by writers and photographers who combined have 50-plus years of experience in the field and newsroom. Always free to readers, the Prophet is published on multiple platforms, and shared within the online community to more than 150,000 people. No paywalls and no paid subscriptions make news and feature stories immediately available with one click of a button or one swipe on a keypad.
​
All content copyright property of The Bandera Prophet