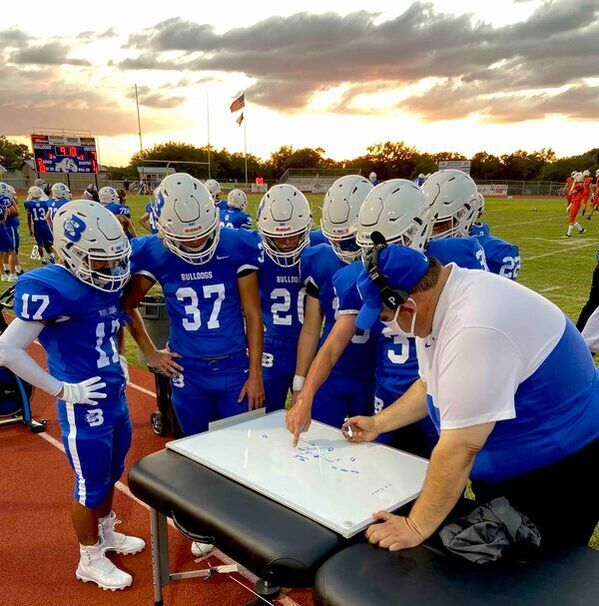 Defensive coach, Manny Martinez,talks with the Bulldog defense on the sidelines after a big play against Llano.

Bulldogs swarmed by Yellowjackets in 52-0 loss​

It has been a long three weeks for coach Joel Fontenot-Amedee and the Bandera Bulldogs varsity football team.
Playing a tough non-district schedule against four teams that are currently 11-1, the Bulldogs, with the majority of the team playing in just their second varsity game, are learning in a trial by fire type situation.
The Bulldog offense has been struggling with execution and along with untimely penalties, have not found their mojo so far this season. Against Llano, the Bulldogs had a really hard time against the opposing defense, garnering less than 100 yards in total offense, 56 passing yards and 35 yards on the ground.
Bulldog QB, Tyler Moore, was held in check, going 6 for 15 passing and had negative rushing yardage, mostly due to sacks.
"We have a lot of young guys and its kind of like life. You have to go through some struggles and sometimes you fail before you make good. We are looking at a lot of film right now and seeing mistakes that we are making. We have over 25 kids who are playing varsity for the first time and a QB that is learning to play the position, he has played DB and WR before but not QB at this level. We have just one guy on offense that started for us last year,” Fontenot-Amedee said. “I looked at the situation and asked myself, what's different? We lost the spring where we work with the guys on plays, getting them in the weight room and all the other stuff like formations, footwork etc. Because of CoVid, we lost even more time and we are still trying to figure out where people need to be. Basically, we are behind the curve, but are going to put our hardhats on and go to work.”
Llano was 8 for 17 passing for 162 yards and had 42 carries for 319 yards against a beleaguered Bulldog defense that has been riddled with injuries.
Defensively, Matthew Stanton was credited with five tackles with David Guerra and Kenny Trevino getting four each to lead the Bulldogs.
"Llano is a very good team, they are coached well and went from 4AD2 down to 3AD1 and kept most of their players," Fontenot-Amedee said.
Looking forward to this Friday's game in Blanco, the Panthers are 2-1 with a loss against Region IV powerhouse, Shiner. In their two wins, against Yorktown and Anderson-Shiro, the Panthers have put 82 points on the board and have given up just 9 points in both games.
"Blanco is a good team and what they do offensively is hard to stop. They are big up front and have a good QB," Fontenot-Amedee said.
The Panthers are averaging 306.3 yards a game on a rush by committee setup with four rushers over 160 yards on the season. Senior QB, Baylor Smith, is leading the team with 190 yards in two games.
Defensively, Blanco junior OLB, Deonte Hector, leads the team with 16 solo tackles.
Gametime is scheduled for a 7:30 p,m. kickoff.