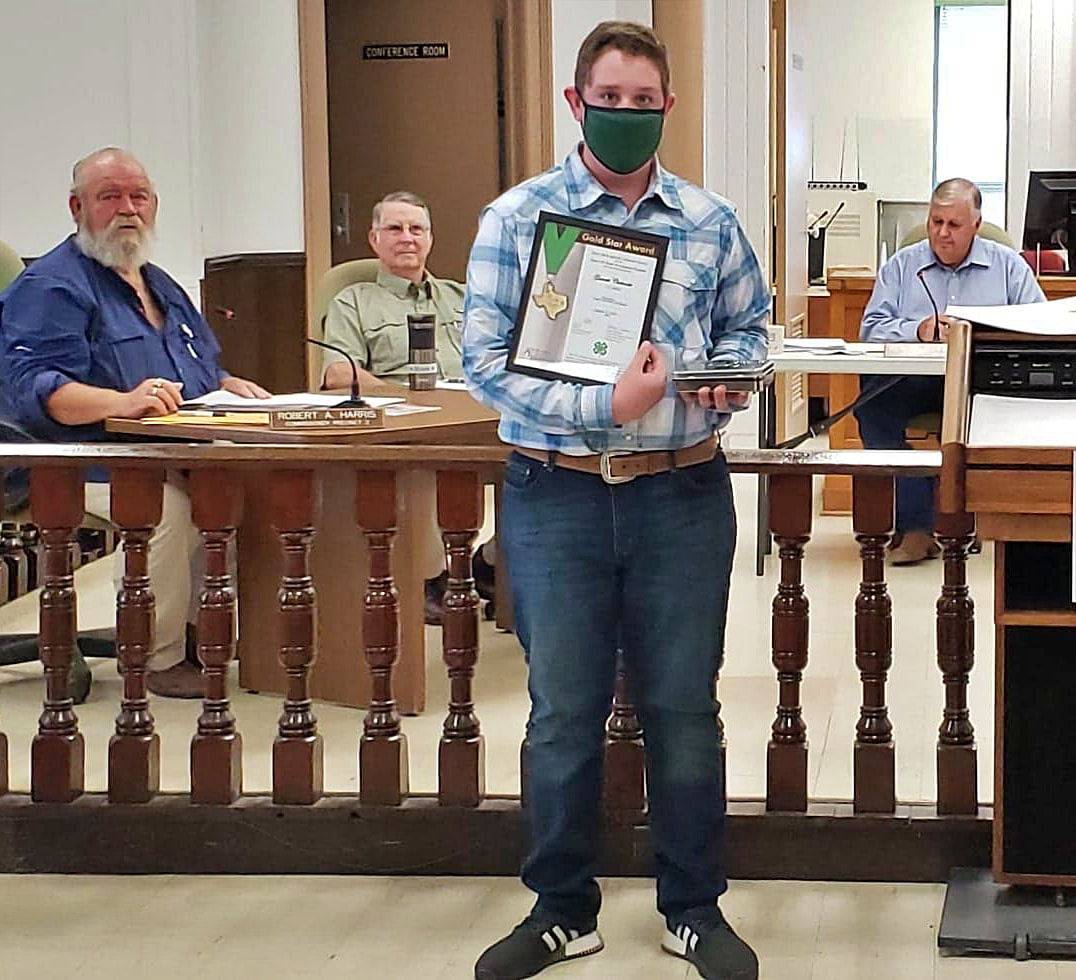 Garrett Salinsky receives the 4-H Gold Star Award in a presentation during the Sept. 24 Commissioners' Court.

Representing the new grassroots organization Lake Medina Shores Alliance, JoAnne Arguelles said members/volunteers spent 175 man hours picking up trash from the sides of the road, filling 140 55-gallon bags. Volunteers also spent 200 man-hours distributing food to 50 families, and collected 35 crates of food to feed the hungry.
“[These are] 125 committed residents who want to see Lake Medina Shores become a better place to live,” Arguelles told commissioners Thursday during their regular court session.
Arguelles said the county has sold several parcels in the area, and it still owns more. She said properties are being improved and values are increasing.
“A lot of people have placed bids at the tax collector’s office, but those bids have not come through,” Arguelles said. “Please let those bids come through so those lots can be in private hands.”
Pct. 4 Commissioner Jody Rutherford said five to seven tax-foreclosed lots in Lake Medina Shores remain in poor condition, and he wants them sold and rolled back into taxable properties.
“We can’t seem to get rid of these lots. We can’t seem to get them cleaned up,” Rutherford said. “I don’t think we need this property. I don’t think it does us any good. They’re not generating any income.”
Acknowledging a misunderstanding between commissioners’ court and the tax office, Rutherford said his plan to execute an agreement between people willing to clean them up and apply their expenses toward the purchase of the lots created confusion.
“I have been told that people have placed bids, I have not seen these offers. I think we’re not getting these offers brought to us,” Rutherford said. “This is last year before $50,000 of tax dollars will go into cleaning up these properties. Next year it will put in the budget if we can’t get the lots cleaned up and sold. It’s not right for people to live in this area and deal with these trashed properties where people are nesting…I will not vote against any offer brought to this court to get rid of these lots.”
County Tax Assessor-Collector Gwenda Tshirhart cautioned the court against accepting bids that are too low. She said some of the offers she’s seen do not cover legal expenses.
“You may want to consider that court and attorneys’ fees be included in the contract. Per Texas property tax code, the court does not have the right to do away with attorneys’ fees,” Tshirhart said, adding it was her understanding that she was to hold bids until the court came up with a solution.
County Attorney Janna Lindig said commissioners could be responsible for collecting information on properties in their districts and soliciting sales to present to the court. Until she can draw up the document for the court to review and approve, commissioners agreed to return to the status quo, in which the tax office presents bids to the court.
“Once we’re past the election, we will review the different avenues,” County Judge Richard Evans said.

In other business, commissioners unanimously approved the 2020-21 budget, and the .6769 tax rate.
County Auditor Darryl Sadler recommended the court allocate $50,000 from the county’s CoViD-19 Grant to help offset health and technology expenses incurred by Bandera, Medina and Utopia ISDs in response to the pandemic. He said Bandera has about 2,800 students, Medina has about 250 and Utopia has about 200, and he has broken down the percentages to grant to each district accordingly.
Workforce Solutions Alamo Executive Director Adrian Lopez reported unemployment claims have decreased over the last few months after an historical rise. Lopez said the 13-county Alamo region, which includes Bexar, Comal, Guadalupe and Bandera counties, had 293,000 unemployment claims during the last six to seven months. As of Thursday, September’s tally was 5,900, though the month still had a week to go. In Bandera County, the claims total 1,500, while the lion’s share of claims were in Bexar County.
Workforce Solutions Alamo Chief Information Officer Dr. Andrea Guajardo said 15 available job listings were posted on Work In Texas, and she urged local employers to list open positions they may have. Guajardo, a former Bandera resident, said she has reviewed the workforce commission’s master plan, and she intends to respond to the local needs.
“We want to make sure the master plan is not just a document that sits on a shelf,” Guajardo said. “The realities on the ground aren’t always reflected in the data.”

The Convention and Visitor’s Bureau reported a positive budget, despite the cancellation of some of the county’s biggest tourism draws.
“We had a tremendous fourth quarter,” CVB Board Chairman Greg Hicks said, adding there was a small increase in Hotel Occupancy Tax funds over last year.
“We’re proceeding cautiously with next year’s budget,” Hicks said. “Bandera County tourism took a ballistic missile to the heart, but somehow prospered with increased revenue.”
Commissioners approved renewing the DirecTV contract for inmates. Sheriff Dan Butts said the premiums are paid for with the inmate commissary fund.
“This does not come out of tax money,” Butts said, adding the percentage the Sheriff’s Office receives from the commissary fund is also used to purchase uniforms and televisions.
“It is a tool that helps us control what is going on in the jail, because it’s something that we can take away,” Butts said.
Butts said in August, the Sheriff’s Office received 567 calls for service, officers travelled 24,555 miles and had a 13.46-minute average tone to on-scene response time. He said the animal control officer picked up 15 dogs and zero cats, and the animal control facility had an average population of seven dogs and five cats. Butts reported county deputies responded to two calls in the City of Bandera limits, and dispatchers answered 1,316 incoming 911 calls. The average jail population was 56 inmates, of those six people were contract inmates from other counties. Last week, 13 inmates were transferred to the Texas Department of Justice Centers, lowering the total jail population to 40 inmates.
County EMS Director Calvin Plummer said EMS received 187 calls in August. First responders travelled 9,725 miles with a call-to-response average time of 1.63 minutes and a call-to-on-scene time of 9.54 minutes.
Plummer said as soon as the state issues its approval, EMS services in Bandera and Pipe Creek will transfer to the new facility.
The Bandera Prophet is grounded on the premise that relevant news delivery is ever-evolving. Founded by newspaper veterans, the Prophet delivers up-to-date information by writers and photographers who combined have 50-plus years of experience in the field and newsroom. Always free to readers, the Prophet is published on multiple platforms, and shared within the online community to more than 150,000 people. No paywalls and no paid subscriptions make news and feature stories immediately available with one click of a button or one swipe on a keypad.
​
All content copyright property of The Bandera Prophet