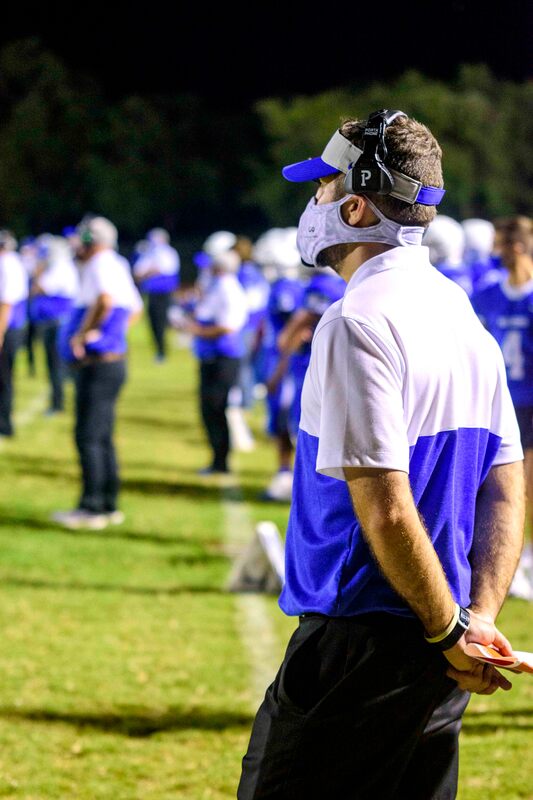 Bandera Head Coach Joel Fontenot-Amedee ponders what is going to happen in the next chapter of Bulldog football as district play starts next week.

Bulldogs have work to do as district draws near​

The varsity Bandera Bulldogs on the job training ended Friday night with a 63-6 loss to the unbeaten Comfort Bobcats on the road.
Bandera fell to 0-4 in non-district play and have a welcome bye week before Homecoming against Crystal City on Oct . 9.
So, with two weeks to get ready for the Javelinas. the Bulldogs will have to put on their hardhats and punch the clock for the rest of the season, because wins and losses are now very  important.
"We are going to do everything we can to get it right in these next two weeks. We will be ready for Crystal City for Homecoming," Head Coach Joel Fontenot-Amdee said.
Bandera's offensive woes continued against Comfort with just 201 yards of total offense, 66 yards passing and 135 yards on the ground on just 46 offensive snaps, a result of not being able to sustain an extended drive.
Bandera's only score came late in the first quarter as QB, Tyler Moore, found the endzone on a short rush to close the score to 7-6.
Comfort scored on a 62 yard pass on the first play of the second quarter to answer the Bandera score and start a 28 point second quarter.
The Bobcats would score four more touchdowns in the second half to make it a 63-6 final.
While it is true that the Bulldogs have six players out due to various reasons, mental and positional mistakes have been telling on both sides of the ball.
"We will have two or three good plays on offense and then we have a big loss, we have to stop that. We need to be sure we are lining up correctly, make better decisions and do what we are supposed to do.
Defensively, we need to string together a few big stops to get off the field, but special teams play was markedly better this week," Fontenot-Amedee said.
Homecoming can be a distraction and that is on the coaching staff's minds but the main focus for the team is the game.
"Even going through our issues, I want to say I really appreciate the fans and the support at home and on the road. It is nice to be in a place that can have the traditional things like a parade, pep rallies and all of the other things in this time of Covid for the students, their families, alumni and fans at Homecoming," Fontenot-Amedee said.
At this point, little is known about Crystal City as they have been dormant for the season so far due to Covid concerns. The Javelinas will open play this Saturday against Zapata on the road. The Javalinas won last years contest with the Hawks by a 22-20 count.
Crystal City did make the playoffs last season and like Bandera, fell in the first round. The team roster shows 16 seniors with most of them returners from last years varsity team.
Homecoming will start early at Bulldog Stadium on Friday, Oct. 9, be there early to get a seat.

Box score
1   2   3   4   Final
Comfort      7  28 14 14  63
Bandera      6   0   0   0     6
Bandera stats:
Passing: Tyler Moore, 1-6-66-0-0, Kenny Trevino, 0-2-0-0-1
Rushing: Jesse Cardenas, 24-71, T. Moore, 6-27, Luke Barnett, 5-25, Brandon Miller, 2-10, K. Trevino, 1-2
Receiving: B. Miller, 1-66
Tackles: Not available
Assists: Not available
The Bandera Prophet is grounded on the premise that relevant news delivery is ever-evolving. Founded by newspaper veterans, the Prophet delivers up-to-date information by writers and photographers who combined have 50-plus years of experience in the field and newsroom. Always free to readers, the Prophet is published on multiple platforms, and shared within the online community to more than 150,000 people. No paywalls and no paid subscriptions make news and feature stories immediately available with one click of a button or one swipe on a keypad.
​
All content copyright property of The Bandera Prophet