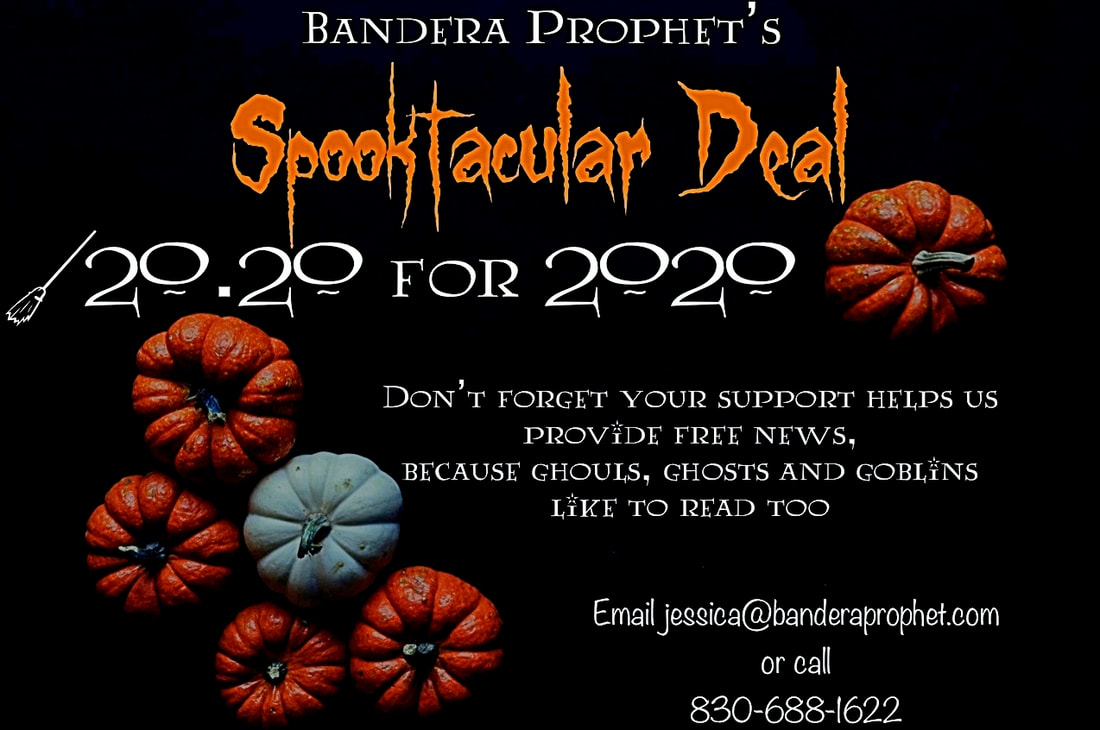 Bandera's varsity Bulldogs went to Carrizo Springs hoping to get to .500 in district play with a win Friday, but the host Wildcats had other ideas, winning the game by a 28-7 score.
Bandera struggled to get the offense moving against a tough Wildcat defense that only allowed he Bulldogs 162 total yards on 40 yards passing and 122 on the ground.
With over 10 players sidelined due to various reasons, Bandera had many on the roster playing both ways in positions they were unfamiliar with and basically going through on the job training in game six of the season.
"We made a ton of mistakes and not doing the basics. We had things that shouldn't be happening this late in the season. There were some mental mistakes, but  we did go out in the second half, the defense picked it up and looked a lot better and gave us a chance to get back in the game. We just didn't capitalize on the chances and didn't get anything going," coach Joel Fontenot-Amedee said.
There are some players who don't get the recognition they should, some due to doing their jobs and getting it done and some due to nagging injuries.
"Garrett Meier has done real well in what we have asked him to do and he grades out well when looking at film, there are some guys up front that played both ways Friday that have never played an entire game one way it was good to get Will Paul back, so I am proud of that. The result isn't what we want, but the effort is there, it's a lot better than game two, three or four earlier this season," Fontenot-Amedee said.
Looking ahead, Bandera will host Devine and Hondo at Bulldog Stadium on consecutive Friday nights.
The two teams played each other Friday and Hondo took the win by a 41-26 tally, giving the Owls the district lead at 2-0.
Devine is tough, well coached and has good football tradition and the Warhorses were one the teams picked to finish first or second in district before non-district started.
They are led by junior QB, Brady Hackelbeil, who is 31-62-621-8-3 through the air and has 676 yards on 73 rushes on the season. Senior RB, Buddy Santos, one of the top rushers in district, has 868 yards on 115 carries this season. As a team, the Warhorses have gained 2298 yards on the ground while averaging 328.3 ypg.
Both games, this Friday and the following Friday, are slated for a 7:30 p.m. kickoff and tickets are available online, as they have been all season.

The Bandera Bulldog Friday Night Football Photo Gallery is brought to you by: 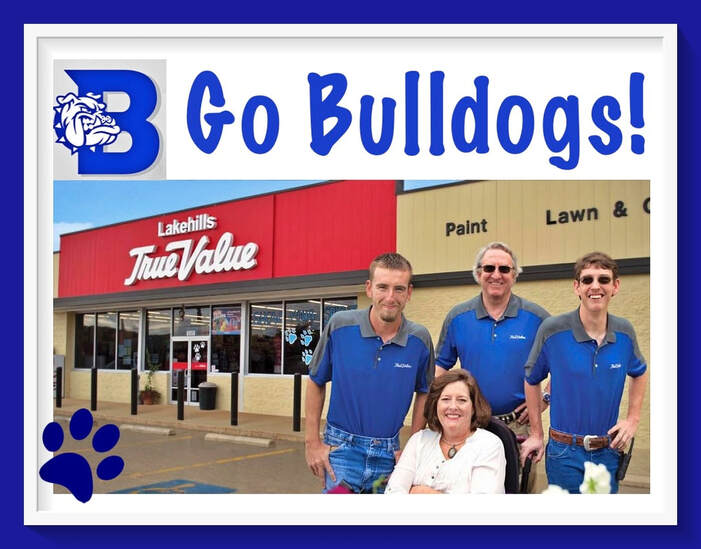 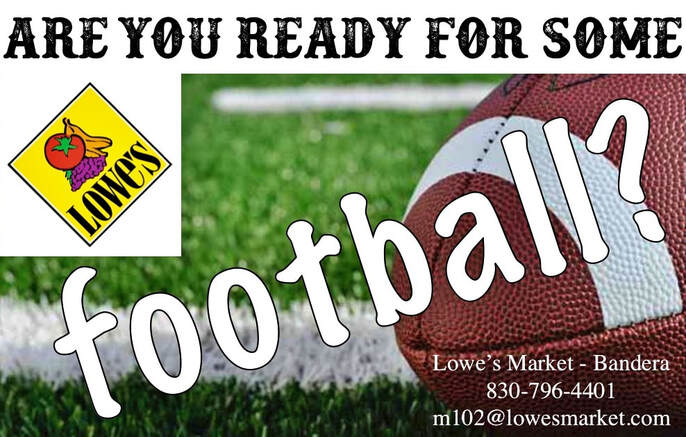 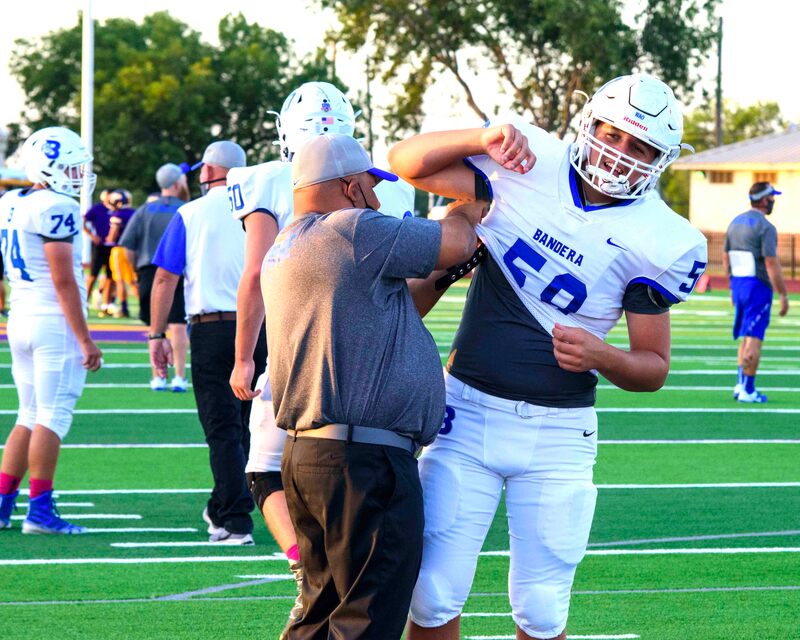 A Bulldog coach helps Brice Clemens with an equipment adjustment before the Bandera at Carrizo Springs game on Friday. 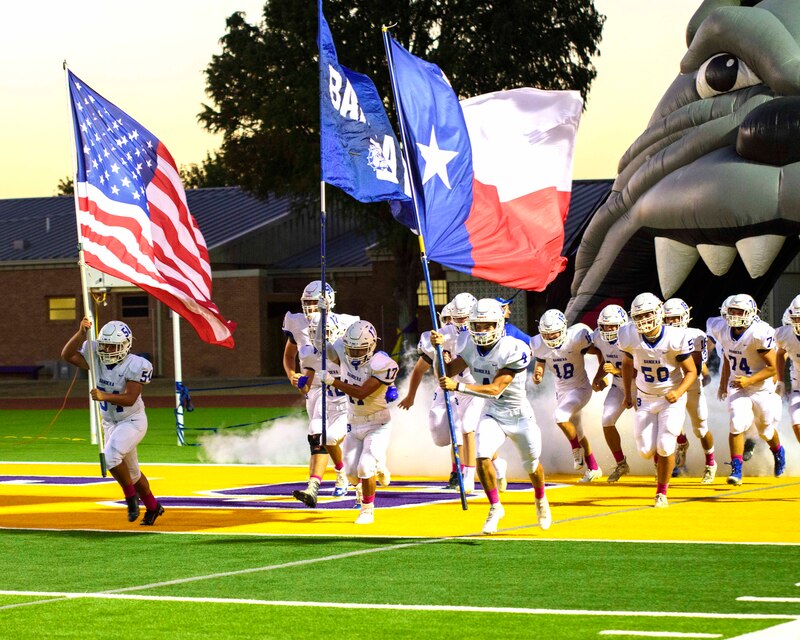 The Bulldogs run onto the turf at the newly redone Frank Carter Stadium in Carrizo Springs. 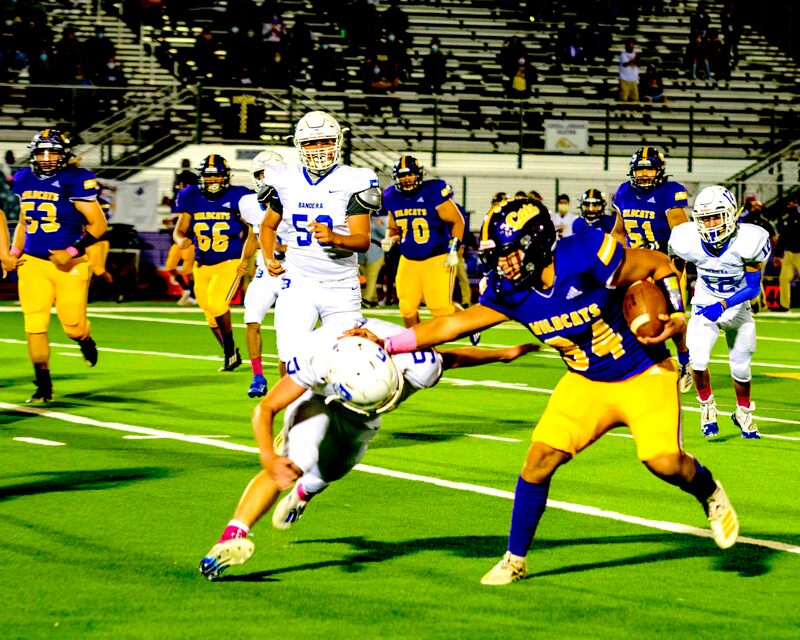 Bandera's Tyler Moore (5) tries to get under the stiff arm of Wildcat RB, Oscar Ramirez. Moore, the starting Bandera QB, went 3-11-40-1-1 offensively and had six tackles and an interception defensively. 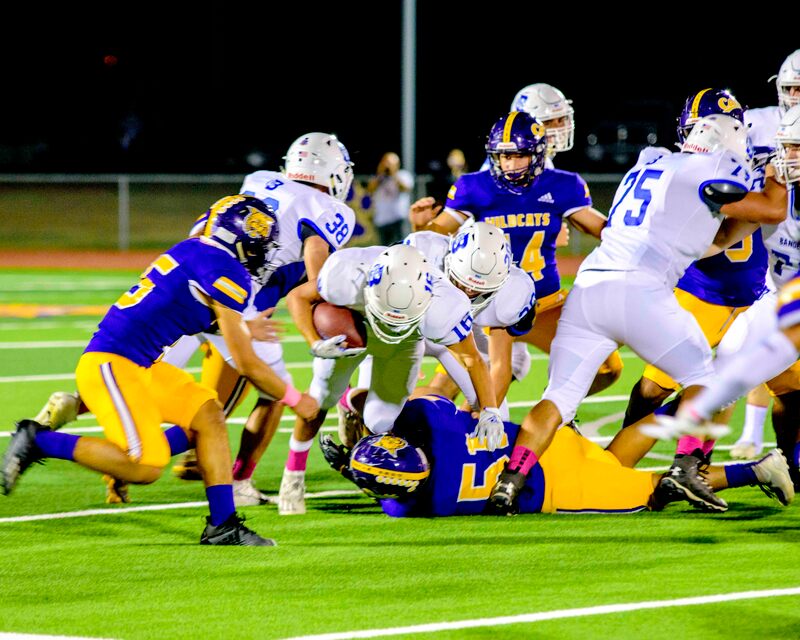 Bulldog Will Paul (16) runs into a crowd early in the game. Paul, another two-way player for the Bulldogs, had one reception for 17 yards and lead the defense with 10 tackles on the night. 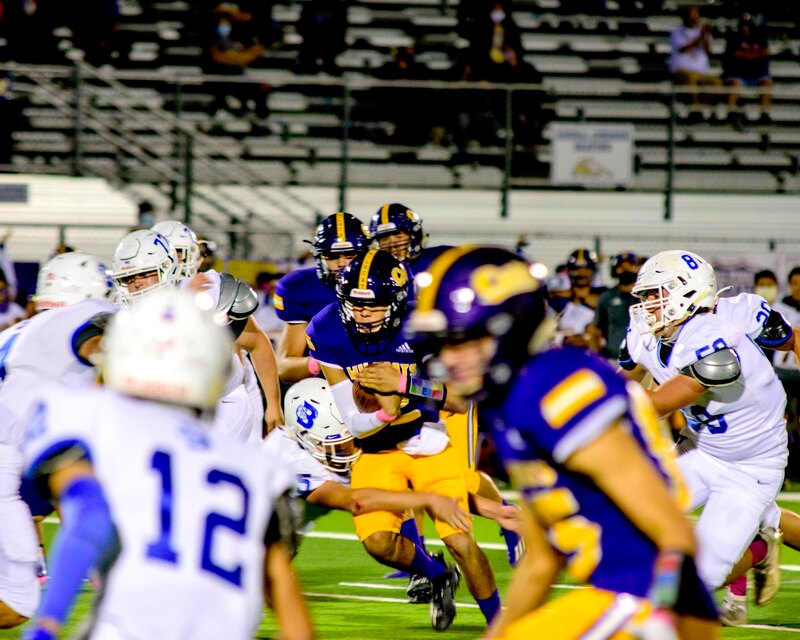 Chaos is the name of the game at the line of scrimmage. 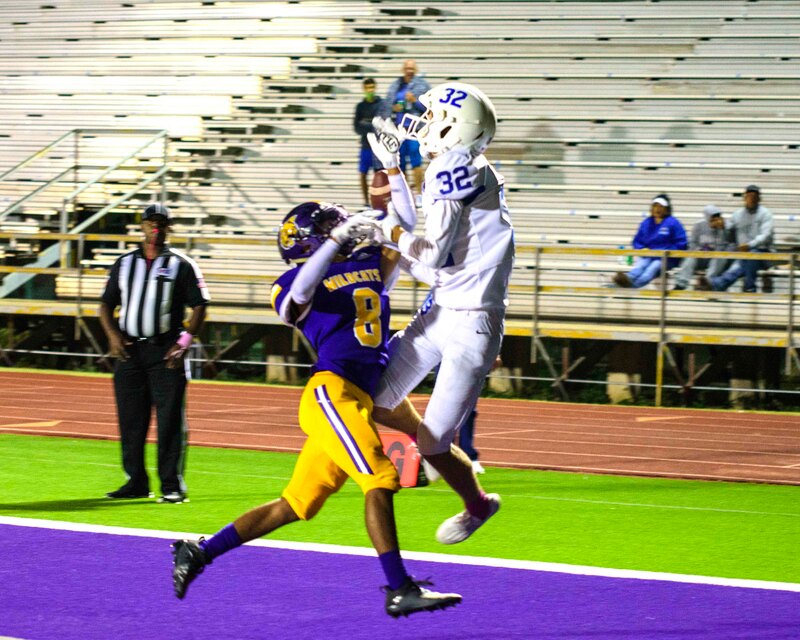 Believe it or not, Liberty Bomer (32) hauled in this pass for Bandera's only touchdown of the night, a 15 yarder from Tyler Moore. Bomer had two catches for 23 yards on the night. 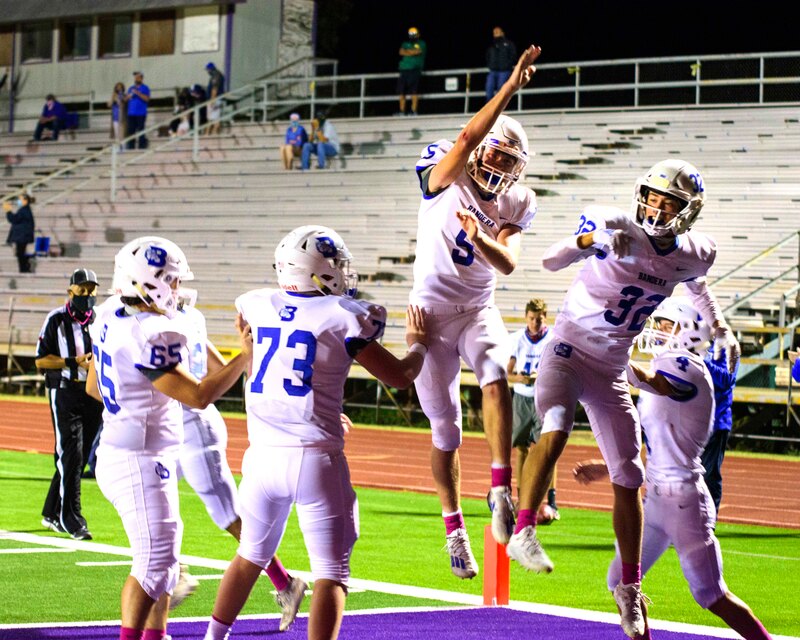 Tyler Moore (5) and Liberty Bomer (32) celebrate with teammates in the endzone after Bomer's 15 yard reception from Moore. 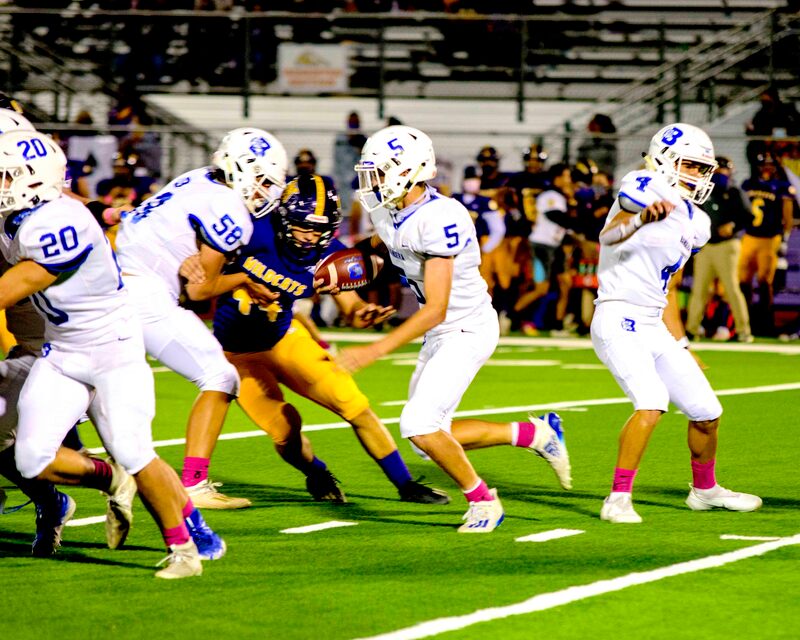 Tyler Moore heads into the fray as Brice Clemens (58) blocks a Wildcat defender. Moore was the Bulldogs leading rusher with 104 yards on 13 carries. 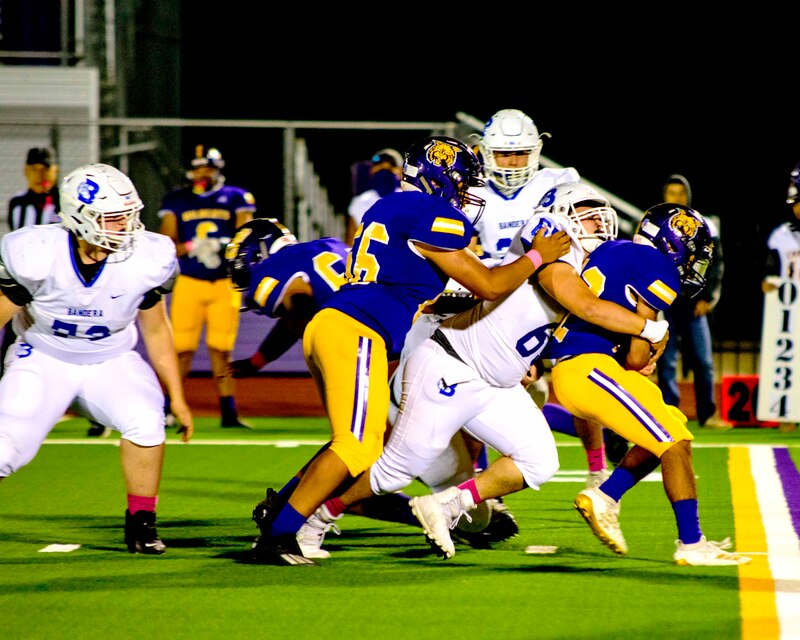 Bulldog Ross Chavez (65) wraps up Carrizo's Joshua Carrizales at the 20. Carrizales was the leading rusher in the game with 122 yards on 19 carries. 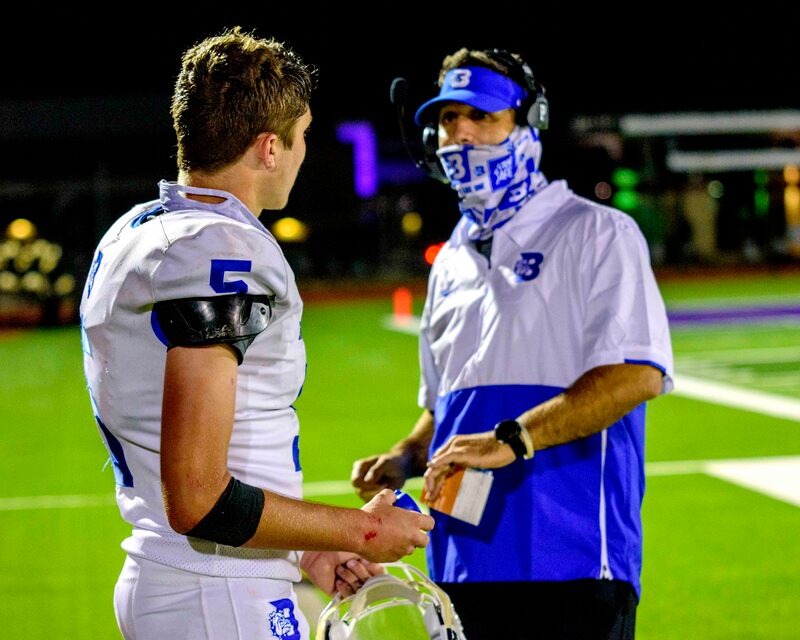 Head Coach, Joel Fontenot-Amedee has a word with Tyler Moore late in the fourth quarter.