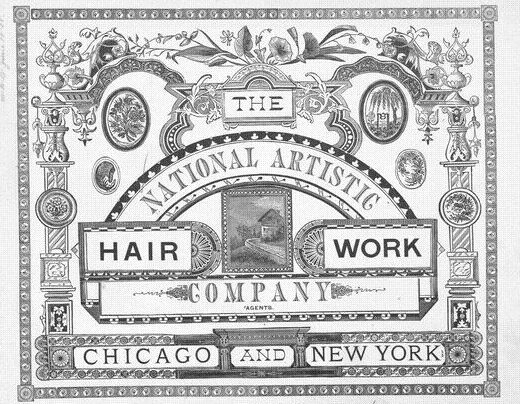 Did you know the Frontier Times Museum has jewelry made from human hair? Artwork or jewelry made of people’s hair may seem ghoulish today, but not so in the Victorian era of the 1800s. An early popular past time for women and girls was weaving human hair as a way to revere a loved one. The objects could be simple like a chain or as elaborate as large wreaths of hair made into a floral design and placed in a shadow box. Using the hair of one who had died was a way to keep the memory of the person alive. Jewelry and items made from the hair of friends and family still living were more like sentimental mementos. Women would give each other locks of hair as a token of friendship much like children give each other friendship bracelets today. Patterns for hair jewelry and crafts were even sold in stores and were featured in women’s magazines.
The reign of Britain’s Queen Victoria from 1837 to her death in 1901 is known as the Victorian era because of her influence on social customs such as wearing a white wedding dress (which she did when she married Prince Albert) and how to properly mourn. Distraught over losing her husband, Queen Victoria went into a prolonged period of mourning, wearing only black dresses with a heavy black veil when in public. Consequently, mourning traditions became rather elaborate during the nineteenth century. Women of a certain social class wore not only black clothing, but jewelry made of black jet stones.
Funeral customs on the frontier depended upon if you lived on the range or in town. If you were far from town, you may have built the coffin yourself and dug the grave. If you lived in town, an undertaker would do the honors. Frontier undertakers often had a side job. In Bandera, the Langford Brothers store sold both furniture and coffins. When a loved one passed, funerals were often held at home with the body displayed in the parlor. When a child passed, it was not uncommon to have a photograph made of the dead child if the child had not been photographed while alive. An artistic photographer would even paint eyes onto the child’s eyelids and add blush tones to their cheeks. Like treasures made from the hair of the departed, the photograph became a cherished memento.
Hair art can be found in many museum’s collections, just as pristine as it was when it was first woven over a hundred years ago. Unlike many other natural materials, human hair has chemical qualities that keeps it from decaying. Archaeologists have discovered human hair that is thousands of years old. The hair work on display at the Frontier Times Museum was done in 1888. Each creation is displayed with the name of the person whose hair was used to create the intricately woven chains, crosses, flowers, and even a miniature powder horn. It is unknown whether the loved ones were dead or alive when the art work was made, but what is known is the Victorian lady who created these extraordinary works of art was totally blind.
Come by the Frontier Times Museum in Bandera, Texas to see this interesting relic of bygone years