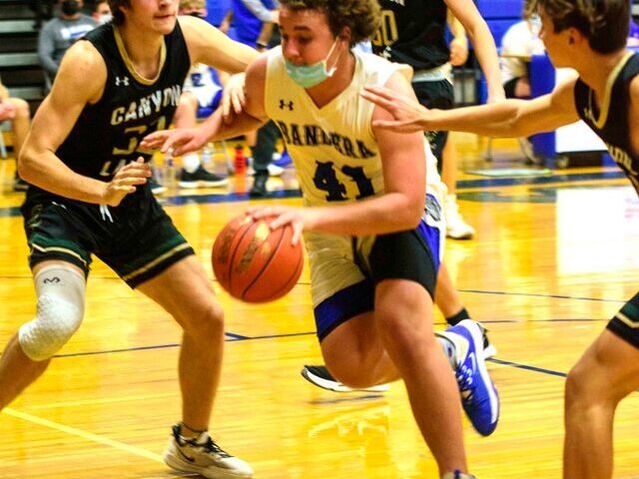 Bandera's Brice Clemens goes hard to the basket in the 60-55 loss to Canyon Lake Tuesday. Clemens scored 15 points on the night.

​By Chris Darus​
The Bandera Prophet

Boys Basketball
Canyon Lake
Varsity
The Bandera Bulldogs desperately needed a win against Canyon Lake Tuesday night to stay in the playoff race for District 28-4A and the Bulldogs delivered in a resounding 73-53 win at home.
It was a tough physical contest with many penalties, called and not called, four technicals in the first half, two against each team, that was entertaining viewing for the fans.
Liam DeMarchi and Luke Barnett led Bandera scoring with 18 and 17 points respectively.
DeMarchi recorded another double double, reaching the milestone 28 seconds into the second quarter, after an 8 point and 10 rebound performance in the first quarter. He went 9-11 from the field on the night with most of them from the paint.
Thanks to DeMarchi’s play along with Lukas Jackson’s strong rebounding early, the Bulldogs doubled up the Hawks, 19-9 in the first and extended their lead to 18 at the half to basically put the game out of reach.
“We did a really good job of competing through a fast-paced, physical game and coming out with an important win. Our guys really set the tone defensively in the first half, and did a good job of maintaining the lead and finishing the job down the stretch. We dominated the rebounding battle, capitalized on second-chance points and took advantage of our opportunities in transition. This was a big win for us, but we have to move on and prepare for what is a tough set of games to close out the regular season. We’re excited about the opportunity to continue to compete for a playoff spot down the stretch,” coach Brady Keane said.
The win was a result of team contributions up and down the roster. The Barnett guys, Luke and Noah, combined for 27 points and 14 boards, Tyler Moore’s name was found in all four stat columns and the rest of the Bulldogs delivered when asked to play.
Now, the Bulldogs have to keep it up and play at the same level for the next three games to stay in the playoff picture. Currently, Bandera and Davenport are tied for the fourth and final playoff spot (both 2-5) and the next three games are critical.
The Bulldogs have a big task ahead as they take on two of the top 15 teams in the state with the 15th ranked Fredericksburg Billies on the road Friday then hosting the number six team in 4A, Boerne, in the Bulldogs last home game of the season next Tuesday. Bandera will finish the second round of district against Wimberley on Friday, Feb. 12.
Box score
1   2   3   4   Final
Canyon Lake      9  12 15 17  53
Bandera            18 21 14 20  73
Bandera stats:
Scoring_ L. DeMarchi 18, L. Barnett 17, T. Moore 11, Noah Barnett 10, L. Jackson 8, Gunnar Winkler 4, Ryan Perez 4, Ryan Zimmel 1
Rebounds_ DeMarchi, 22, Jackson, 13, L. Barnett, 7, N. Barnett, 7, Moore, 5, Perez, 4
Assists_ Moore, 6, L. Barnett, 2, N. Barnett, 2, Winkler, 2, Zimmel, 1
Steals_ Moore, 4
JV
Still showing signs of a depleted bench from last week, the JV Bulldogs gave all they had in a close 60-55 loss to Canyon Lake, dropping to 1-4 in district.
Up by two at the half, Bandera saw Canyon Lake get hot in the third, outscoring the Bulldogs by seven and playing them basket for basket in the fourth to get the victory.
Kayden Brown and Brice Clemens scored 15 each to lead the Bulldog effort.

Powerlifting
The Lady Bulldogs took fourth overall with two gold and one bronze medalists at the TSS Meet held on Jan 27.
Ashley Grodman took another first place at 114 and Kylee Hensley nabbed her first gold of the season at 165. Grodman had a three-lift total of 555 pounds and Hensley totaled 820 even though she was the lightest competitor in her class.
Kamrynn Golightly totaled 650 pounds, improving on her previous best placing this season with a second place.
Also participating for Bandera and placing in their respective classes were Alexandra Martinez (4th), Makayla Moore (4th) and Lauren Davila (7th).
"The girls improved in their second meet of the year. it was a great effort by all.  They are awesome team mates who pull together, especially in these COVID-19 conditions, to be able to compete. I am very proud of them," coach Manny Martinez said.
Due to extenuating circumstances, the Boys team withdrew from their next scheduled meet on Feb. 3 and 4.
The Bandera Prophet is grounded on the premise that relevant news delivery is ever-evolving. Founded by newspaper veterans, the Prophet delivers up-to-date information by writers and photographers who combined have 50-plus years of experience in the field and newsroom. Always free to readers, the Prophet is published on multiple platforms, and shared within the online community to more than 150,000 people. No paywalls and no paid subscriptions make news and feature stories immediately available with one click of a button or one swipe on a keypad.
​
All content copyright property of The Bandera Prophet