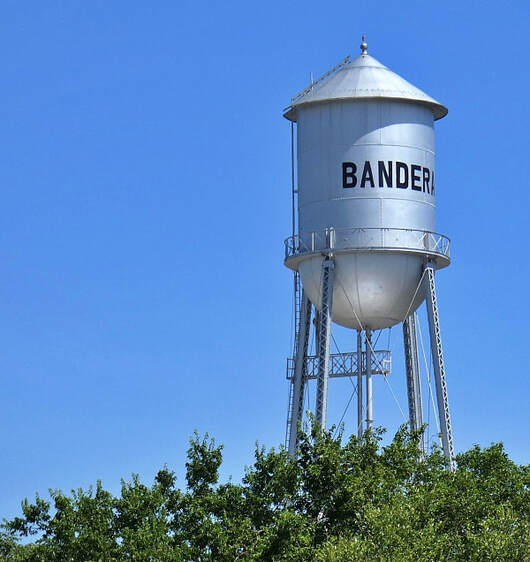 The Bandera Water Tower is on track to become a county historic landmark. With the blessing of the City of Bandera, the Bandera County Historical Commission plans to seek a formal Landmark Designation for the iconic tower from the Texas Historical Commission.
Known as a Tin Man Water Tower because of its resemblance to the Tin Man in the Wizard of Oz, the Bandera tower is one of six remaining in Texas, according to Rebecca Norton, of the Bandera County Historical Commission.
“At one time, these preengineered water towers could be found throughout the state, but they have slowly been replaced by newer designs,” Norton wrote.
The building beneath the tower was built in 1938, when the Bandera County Control & Improvement District No. 1 was created with funding from the New Deal project of the Works Progress Administration during the Great Depression, according to Ray Carter, of the Bandera County Historical Commission. The water tower was added later in 1940.
“The buildings are hand hewn limestone,” Carter told the Prophet.
In order to receive the designation, the commission needs the city’s permission to pursue the designation, as well as access to the building and any records that may exist, Norton said.
“It’s important the work done to preserve the water tower as an historic landmark is done before this historic site is threatened,” Norton wrote.
The Bandera Prophet is grounded on the premise that relevant news delivery is ever-evolving. Founded by newspaper veterans, the Prophet delivers up-to-date information by writers and photographers who combined have 50-plus years of experience in the field and newsroom. Completely free to readers, the Prophet is published on multiple platforms, and shared within the online community. No paywalls and no paid subscriptions
make news, sports, feature stories and more immediately available with one click of a button or one swipe on a keypad.
All content copyright property of The Bandera Prophet