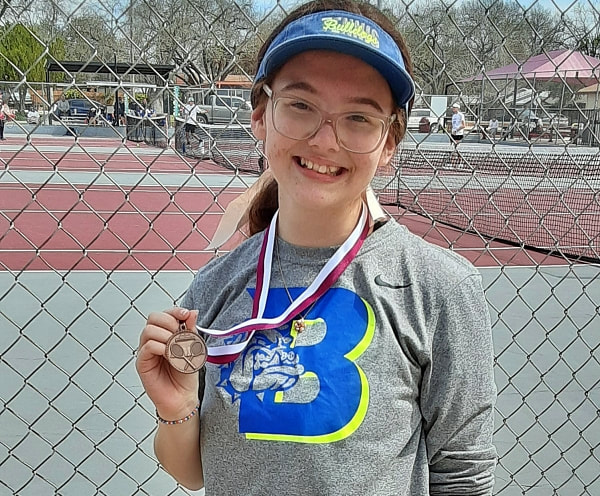 Tennis
Bandera Tennis is on a roll!
For the second week in a row, Bandera had winners in the Consolation bracket.
Michelle Linson won the Girls Singles championship and Ethan Molnar took the Boys Singles crown.
"The rest of the team also won some matches and showed great improvement in their play, noteably the play of Christian McKnelly and Amberly Patterson in Mixed Doubles, Zoe Servantes and Addy Allen in Girls Doubles, Liam Sanders, Ethan Ledesma, and Cyrus Mendez in Boys Singles, and Candy Martinez and Skylar Gunn in Girls Singles," coach Ginger Frye said.

Baseball
Bulldog Baseball participated in the Devine Tournament this past week, going 0-4 as they work out the bugs in a rebuilding year.

Devine
The host Warhorses took a 9-2 win over the Bulldogs after jumping out to a 3-1 lead in the first inning.
Bandera had three hits, two from Brock Cardenas and one by Logan Dybowski.
Lane Hollingsworth was on the mound for the Bulldogs, recording four strikeouts while taking the loss.

Brackenridge
Both teams scored in the first and third innings and with the score 5-3 going into the fourth, Brackenridge got hot at the plate, scoring six runs in the bottom of the inning, to bring the game to an end when Bandera couldnt score in the top of the fifth.
Jesse Cardenas and Cord Koenig both had two hits and Michael Wilson had 3 RBIs in the loss. Brock Cardenas took the loss for Bandera.

Eagle Pass Win
Win used a steady diet of hits (13) to score early, two in the first inning, five in the second and seven in the third, forcing Bandera into catch up mode. Bandera found the scoreboard in the top of the fourth, scoring two runs, but the game was called early.
Bandera recorded four hits, Cord Koenig had two of them and Riley Haley and Michael Wilson shared pitching duties for the Bulldogs.

St. Mary's Hall
Bandera's comeback bid against St. Mary's Hall came up just a bit short in a 10-8 loss.
The Bulldogs opened the top of the first with a score but the Barons answered with eight runs in their half of the first to put Bandera in a hole.
The Bulldogs scored three in the second and four in the top of the third to tie the game, but the Barons added another two runs in the bottom of the third to get the win.
Jesse Cardenas recorded three hits and two RBIs and teammates, Brock Cardenas and Cord Koenig had two RBIs each.

Davenport
Bandera was looking to bounce back from the 6-1 loss the previous night as the Davenport Lady Wolves took the pitch Friday evening.
The game was defensive oriented in the first half as the scoreboard read 0-0 at the break.
Bandera's Halena Rios broke the stalemate early in the second to put Bandera up, 1-0 but Davenport answered with two scores in a row to take the lead.
Rios scored again late to  deadlock the game at 2-2 and deny the visitors a win.
Kuenzel pointed out the outstanding defensive play of Benedict, Dowda, Edwards, Mendoza, Morgan Cole, Maci Morrison and Mia Ramirez for thottling the Davenport offense.
Thane played a good game in net, making 19 saves on 21 shots.

Softball
The Lady Bulldogs lost an 11-1 decision to Antonian last Thursday.
Antonian scored nine runs in the bottom of the second and added another two in the fourth to bring the game to an early close.
April Rodriguez and Aubrey Mangold shared the mound for Bandera.
Bandera will take on the always tough, La Vernia Lady Bears, this Thursday.
The Bandera Prophet is grounded on the premise that relevant news delivery is ever-evolving. Founded by newspaper veterans, the Prophet delivers up-to-date information by writers and photographers who combined have 50-plus years of experience in the field and newsroom. Always free to readers, the Prophet is published on multiple platforms, and shared within the online community to more than 150,000 people. No paywalls and no paid subscriptions make news and feature stories immediately available with one click of a button or one swipe on a keypad.
​
All content copyright property of The Bandera Prophet