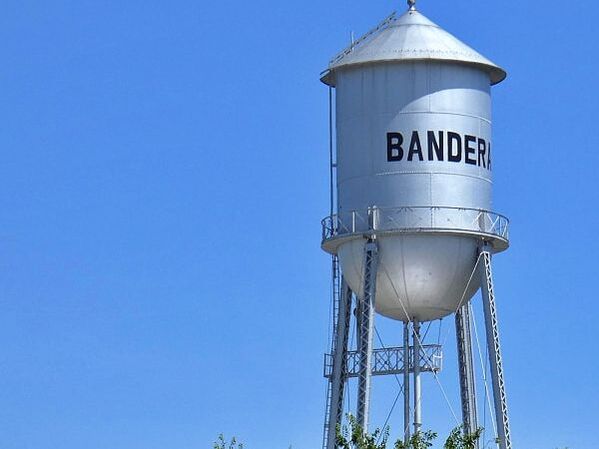 Bandera City Council members have given their seal of approval for the Bandera County Historical Commission to seek a formal Landmark Designation for the city’s water tower.
Water towers serve two key purposes, Rebecca Norton, of the BCHC, said. The first is to store water for the community, the second is to stand as a beacon of civic pride. Water towers often become part of many communities’ identies, standing high above the horizon, a sentry and beloved fixture of the landscape.
The Bandera water tower was constructed in 1940, and since has been featured in souvenir postcards and in the background of many historic photos. In 2010, Norton said, Texas Highways Magazine declared it a true Texas landmark.
“We have six remaining in state of Texas,” Norton said. “Because they have become so rare, the towns are fighting to save what is left.”
The BCHC is seeking permission from the city and county to pursue a recognized Texas Historical Landmark designation for both the water tower and the limestone building that sits beneath it.
The city’s obligation if approved, will be to maintain the tower and the building so they are adequately preserved. The benefits of attaining the designation include making the city eligible for federal and preservation grants, which would cover the costs of maintenance.
“By having this historic designation, the BCHC feels it’s a way to protect this important asset,” Norton said.
The Bandera Prophet is grounded on the premise that relevant news delivery is ever-evolving. Founded by newspaper veterans, the Prophet delivers up-to-date information by writers and photographers who combined have 50-plus years of experience in the field and newsroom. Completely free to readers, the Prophet is published on multiple platforms, and shared within the online community. No paywalls and no paid subscriptions
make news, sports, feature stories and more immediately available with one click of a button or one swipe on a keypad.
All content copyright property of The Bandera Prophet