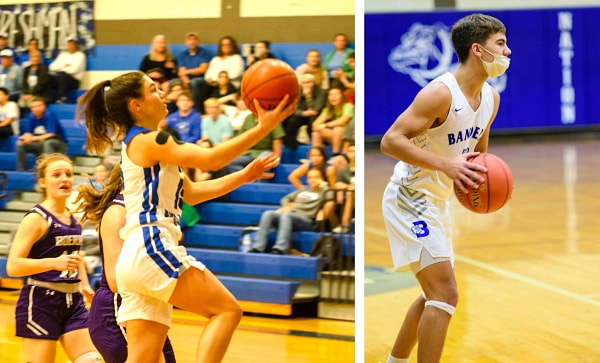 Left, Brianna Stimmell was named as a First Team All-District player.  Right, Luke Barnett was recognized as the District 28-4A Newcomer of the Year.

With the Boerne Lady Greyhound's 73-54 loss to Hardin-Jefferson and the Greyhounds 55-49 loss to Huffman-Hargrave, both in the state semi-finals, District 28-4A has released their choices for All-District honors.
The following season wrapup is from each respective coaches desk.

Congratulations to these Lady Bulldogs who proved to not only be impressive on the basketball court, but also take care of business in the classroom.
The following athletes made the District 28-4A Academic All-District Team: Katie Dibrell, Summer Haby, Hannah Edwards, Breanna Stimmell, Samantha Kennedy, Madison Leal, Avery Ouellette and Elizabeth MacNeil.
Stimmell and MacNeil both made the Academic All State Teams for the TGCA (Texas Girls Coaches Association) and TABC (Texas Association of Basketball Coaches). Kennedy also made the TABC Academic All State team.
Along with the academic honors, the Lady Bulldogs also had several players receive All District Honors in what is considerably one of the toughest districts in 4A girls basketball in Texas.
First Team All-District: Breanna Stimmell
Second Team All-District: Madison Leal, Summer Haby and Samantha Kennedy
Honorable Mention: Elizabeth MacNeil and Estella Calderon

After Boerne’s postseason run came to a close Tuesday night, District 28-4A announced its All-District teams which featured five members of the Bandera basketball squad.
Junior Luke Barnett, playing at the varsity level for the first time, made an immediate impact this season for the Bulldogs and was named the District 28-4A Newcomer of the Year.
Barnett averaged a team-high 10.9 points per game through the regular season and upped that mark to 12.4 PPG in district play. He also averaged 3.1 rebounds, 2 assists and 2 steals per game, and was one of Bandera’s best perimeter defenders.
Barnett’s top performance of the year came against Davenport on Jan. 12, when he scored 19 points. He also contributed 19 points against Wimberley on Jan. 26.
Juniors Tyler Moore and Liam DeMarchi were also recognized by the district’s coaches. Both were named to the Second Team All-District squad for the second consecutive season. Moore averaged 10.2 points, 5.4 rebounds, 2.3 assists and 2.6 steals per game for the season and was among the district’s scoring leaders at 13.9 points per game. Moore had breakout performances against Davenport on Jan. 29 (22 points) and Wimberley on Feb. 12 (21 points).
DeMarchi was a force to be reckoned with in the paint all year, averaging 7.4 points and 8.7 rebounds for the season. DeMarchi also posted five double doubles in district play and finished with seven double doubles on the season. He was named the San Antonio Express News Player of the Week after scoring 18 points and grabbing 22 rebounds in a 73-53 win over Canyon Lake on Feb. 2.
Seniors Lukas Jackson and Gunnar Winkler earned Honorable Mention All-District honors for their efforts during their final season with the Bulldogs. Jackson was among the best rebounders in the district, averaging 10.7 rebounds per game in district play, while finishing the season with overall averages of 7.1 points and 10.0 rebounds per game. Jackson had four double-doubles this year, including a 14-point, 14-rebound effort against state-ranked Fredericksburg.
Winkler finished the season averaging 6.2 points per game while also contributing an average of 2.2 rebounds and 1.2 assists. Winkler had 16 points in the Bulldogs 76-57 win over Canyon Lake and had a season-best 20 points in a 57-37 win over Hondo.
Additionally, more than half of the Bulldogs’ varsity basketball roster was named to the Academic All-District Team. Luke Barnett, Noah Barnett, Joseph Kennedy, Ryan Zimmel, Lukas Jackson, Gunnar Winkler, Ethan Langton and Harvey Guerra each earned Academic All-District honors.
Furthermore, Jackson, Zimmel and Guerra earned state recognition from the Texas High School Coaches Association for their academic success throughout their high school careers. Jackson was a First Team Academic All-State selection, Zimmel earned Second Team Academic All-State honors, and Guerra was named Honorable Mention Academic All-State.
After finishing 10-15 this season and posting the program’s best winning percentage since the 2014-2015 season, Bandera will return four starters and seven lettermen heading into next year. Luke Barnett, Moore, DeMarchi and Noah Barnett return from the starting lineup while Ryan Perez, Kayden Brown and Joseph Kennedy will be back as returning lettermen and will be key to the team’s success next year.
The Bandera Prophet is grounded on the premise that relevant news delivery is ever-evolving. Founded by newspaper veterans, the Prophet delivers up-to-date information by writers and photographers who combined have 50-plus years of experience in the field and newsroom. Always free to readers, the Prophet is published on multiple platforms, and shared within the online community to more than 150,000 people. No paywalls and no paid subscriptions make news and feature stories immediately available with one click of a button or one swipe on a keypad.
​
All content copyright property of The Bandera Prophet