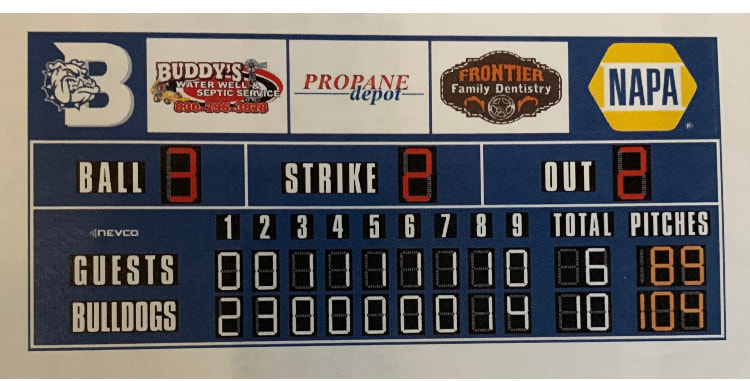 Bandera ISD
What's the score?
If you take a look in a few weeks, Bandera will be 3-0!
Bandera High School is set to get two more scoreboards, one in the main gym and one at Bulldog Field, to go along with the new scoreboard at Lady Bulldog Field.
Bandera Bank has stepped up to sponsor the gym scoreboard and the baseball scoreboard has four sponsors making that a reality.
Propane Depot, Frontier Family Dentistry, Buddy's Water Well and Septic Service along with Bandera Auto and Truck Supply, the local NAPA distributor, have shared the cost of replacing the old scoreboard.

Baseball
The linescore from Friday's matchup with Cornerstone Christian tells the tale in the Warriors 10-0 win over the Bulldogs.
Cornerstone recorded their second win this season against Bandera, with a seven hit, one error performance.
Bandera, still fighting the error bug, had seven errors and registered one hit in the loss.

Soccer
Boys
By Coach Westley Miller
Bandera Soccer finished its season last Monday against Fredericksburg on the road.
Bandera's previous match saw the Bulldogs fall short, 10-2, in favor of Fredericksburg. Although the Bulldogs fell short again to the number two team in district, the score shows major improvement with a final result of 2-0, in favor of Fredericksburg.
Bandera played hard throughout the match and Senior Josh Short and Sam Nimmrichter organized play to kept the pressure on, not allowing Fredericksburg to find their rhythm.
Bandera was able to take eight shots on goal, led by Seniors Blaise Salazar and Josue Enriquez, but were unable to get one in.
Senior Goalie Bailey Cox only allowed he two goals while collecting eight saves.
With the season at an end, the Bulldogs have improved their play in a very competitive district. Securing six wins on the season along with a tie, the Bulldogs look forward to a competitive offseason in preparation for next year.


Softball
Varsity
Boerne's Lady Greyhounds took a 10-0 lead in the top of the first inning to put Bandera into catchup mode in Bandera's home opener last Tuesday.
Nerves, mental mistakes and a few errors (5) all contributed to the 18-1 loss.
Things were going better in Friday's home matchup with the Wimberley Lady Texans.
Bandera took a 6-1 lead into the fourth inning when Wimberley's bats got hot, scoring 18 runs over the next four innings, to the Lady Bulldogs six scores to take a 19-12 win.
Cami Chesler and Maelynn Haley both had 3 RBIs for Bandera and Aubrey Mangold had eight strikeouts in 6-2/3 innings of work on the mound.
Bandera will take on Davenport away, later today.

Tennis
By Coach Ginger Frye
JV
Bulldog tennis had another great day last week with the Boys Doubles team of Luke Polanco and Liam Sanders placing second. Skylar Gunn and Candy Martinez each had wins in Girls Singles and the Girls Doubles team of Addy Allen and Zoë Servantes showed great improvement.
Varsity
Another great showing by Bulldog Tennis at the first annual Southwest Legacy Tournament.
Ethan Molnar took second in Boys Singles and Cobe Martin went 2-2 in the same division. The Mixed Doubles team of Christian McKnelly and Amberly Patterson went 2-1 for the day as well.
Shout outs to Michelle Linson, Cyrus Mendez, and Kyle Morgan for some great tennis played, but just fell a little short of the wins.