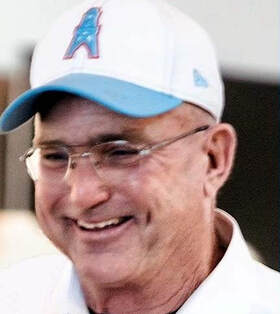 Roger Edwin Schultz, 59, of Bandera, passed away on Monday, Sept. 20, 2021 in San Antonio. He was born in San Antonio to Douglas Robert Schultz and Mary Nell Williams Schultz on Sept. 12, 1962. He married Jevonne Marie Schultz on May 25, 2009, in Bandera.
He graduated from Bandera High School in 1981. After graduation he became a Bandera City Police Officer and then worked as a Houston Police Officer for a short while. He came back to Bandera and started with the Texas Department of Transportation where he worked for 29 years and retired in June, 2012.
He also served in the Army National Guard and was honorably discharged on March 6, 1990 and then went into the Navy Reserves. After his retirement from TxDOT, he built a successful lawn service business in Bandera, taking care of many local business and residential homes in the area.
He took his love for music and the need to help people and started his own DJ service. He and his wife would DJ many of the high school proms and school dances that their daughters attended.
Roger also actively participated in the community by coaching his daughters in Youth Soccer, Little League -Girls Softball and Boys & Girls Club Basketball. He loved football and took his love for the game and became a member of the Texas Association of Sports Officials – San Antonio Chapter where he officiated Texas High School and Middle School Football for more than 29 years. He even officiated with his daughter for couple of years.
His favorite team was the Houston Oilers and after they left Texas he became a Houston Texans fan. Even naming his daughter after the city of Houston.
Roger was always considered the class clown and never met a stranger. He made everyone feel welcomed and left everyone with a laugh or smile. He loved being a dad and was especially proud of his daughter Taylor, who graduated from UTSA and became a coach, and daughter Lacey, who is working towards her degree at UMHB.
Roger is preceded in death by his parents Douglas Robert Schultz and Mary Nell Schultz.
Roger is survived by his wife Jevonne Schultz; daughter Taylor Houston Schultz Meyer (Tyler), of Harper; daughter Lacey McClaine Welch of Belton; brothers Doug Schultz (Susan) of San Angelo, Roy C. Schultz, of San Antonio, and Ronnie Schultz (Susie) of Pipe Creek; in-laws and honorary parents Allen L. Meyer and Mae Vion Meyer, brother-in-law, Allen L. Meyer, II, (Liza) and sister-in-law Cheryl Meyer; numerous, nieces, nephews and great nieces and nephews; and his dogs Cowboy and Kookie (Mr. Big Dog)
A Memorial will be held Saturday, Oct. 2, at 11 a.m., at Grimes Funeral Chapel in Bandera, with visitation to follow at Pipe Creek Volunteer Fire Department.
The family invites you to send condolences at www.grimesfuneralchapels.com by selecting the “Send Condolences” link.
The Bandera Prophet is grounded on the premise that relevant news delivery is ever-evolving. Founded by newspaper veterans, the Prophet delivers up-to-date information by writers and photographers who combined have 50-plus years of experience in the field and newsroom. Always free to readers, the Prophet is published on multiple platforms, and shared within the online community to more than 150,000 people. No paywalls and no paid subscriptions make news and feature stories immediately available with one click of a button or one swipe on a keypad.
​
All content copyright property of The Bandera Prophet