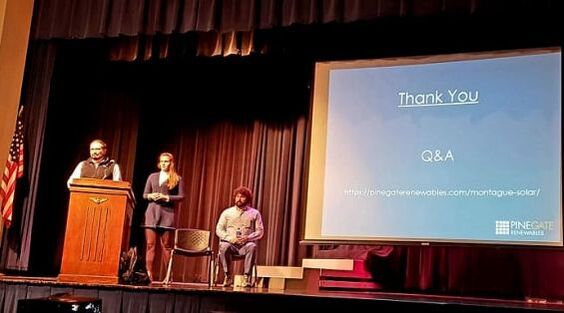 Three representatives from Pine Gate Renewables, LLC, presented a preliminary view last Monday of a proposed multi-million dollar solar farm project in Bandera. About 60 to 70 people attended the Q&A session, organized by Bandera ISD and held in the Bandera High School auditorium.
The project, Montague Solar, LLC, a subsidiary of parent company Pine Gate Renewables, has had a lease in place with the owner of the property on FM 3240, formerly known as the LH7 ranch, for two years. Proposed plans include building a 120-megawatt, 1,000-acre solar farm that connects directly into the BEC electrical grid.
Property Tax Advisor Brandon Westlake said Pine Gate included Bandera ISD in its application for a 313 agreement because the state required it, but it does not guarantee the school district’s participation. He said the 313 agreement ensures Bandera ISD would not be financially harmed, and the district would benefit by keeping $600-$800k in its budget, that he said would otherwise be subject to recapture by the state.
School board members have not yet voted on the matter, nor does the company require the district’s cooperation to proceed.
Hancock said he hopes to receive a reply from the state by October of this year, and Pine Gate representatives will attend a future school board meeting to discuss the matter further with trustees.
According to the application, the proposed tax abatement, if approved, would begin in 2024 and last through 2033. Senior Manager Alan Hancock said the company is still determining whether to file applications with the county and groundwater district, as taxing entities.
Full construction of the project, if approved, is anticipated to begin in the fourth quarter of 2022, with completion by Dec. 31, 2023, and commercial operation beginning in January 2024. The lifespan of the project would be 35 years, at which point Project Manager Forrest Coldren said all equipment would be removed, including underground wiring, and grass and trees would be planted to restore the property to its original condition. The guarantee, she said, would be in the form of a decommissioning bond, required by the state, that holds for the life of the project, whether owned by Pine Gate or sold to another operator.
Some concerns expressed by those in attendance Monday evening included whether Pine Gate Renewables had an overseas affiliation with Avangrid Renewables, based in Spain, which Coldren emphatically denied. She said Pine Gate is based in Asheville, N.C., founded by James Luster, from Florida, in 2014. The president is Ben Catt, who Coldren said attended Purdue University and has been with the company since its inception.
Other questions included why Bandera, and to whom would the energy be sent. Hancock said they needed the infrastructure already in place with BEC, adding the energy would be sent to a holding pool, and travel through the electrical grid to wherever the greatest demand was.
In response to voiced concerns about devalued property, damage to the aquifer, ruined views and wildlife habitat, Hancock said open fences, plant buffers, regular equipment maintenance and replacement, and pollinator gardens have proven to be environmentally beneficial, and he said studies have shown no negative impacts on property values in comparable areas.
Coldren said a preliminary archaeological evaluation has been completed, however the company is not required to perform a full archaeological study if they do not receive a USDA loan or federal funding.
Because the project is in its infancy stage, some frustrated attendees were left with many unanswered questions, including whether the solar farm would be built if the school district rejects the 313 agreement, how much the bond would be, and how many panels would be installed.
Hancock said Grimes, Denton, Wise and Kleburg Counties were other Texas areas Pine Gate was researching for solar farms.
For more information, go to www.pinegaterenewables.com/montague-solar.
To view the 313 application with the Texas Comptroller of Public Accounts, go to https://assets.comptroller.texas.gov/ch313/1661/1661-bandera-montague-app.pdf?fbclid=IwAR23F4KN73DQzCrKxkDrFvPuIypZde6XhFH-6-yfFogPghQxUwNBhFRbggI 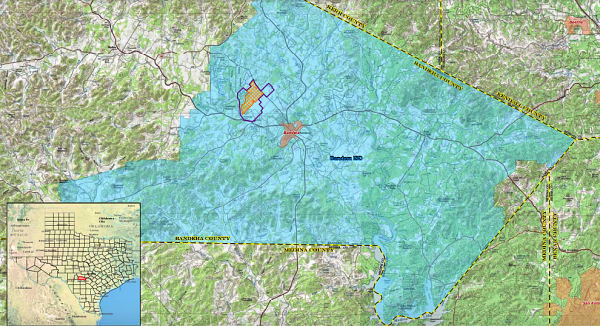 A map details the proposed location of the Montague Solar farm on FM 3240.
The Bandera Prophet is grounded on the premise that relevant news delivery is ever-evolving. Founded by newspaper veterans, the Prophet delivers up-to-date information by writers and photographers who combined have 50-plus years of experience in the field and newsroom. Completely free to readers, the Prophet is published on multiple platforms, and shared within the online community. No paywalls and no paid subscriptions
make news, sports, feature stories and more immediately available with one click of a button or one swipe on a keypad.
All content copyright property of The Bandera Prophet