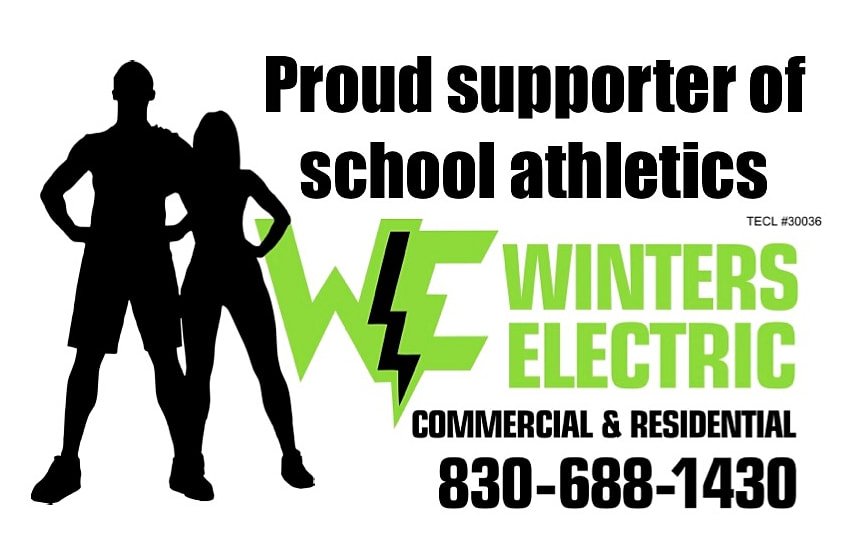 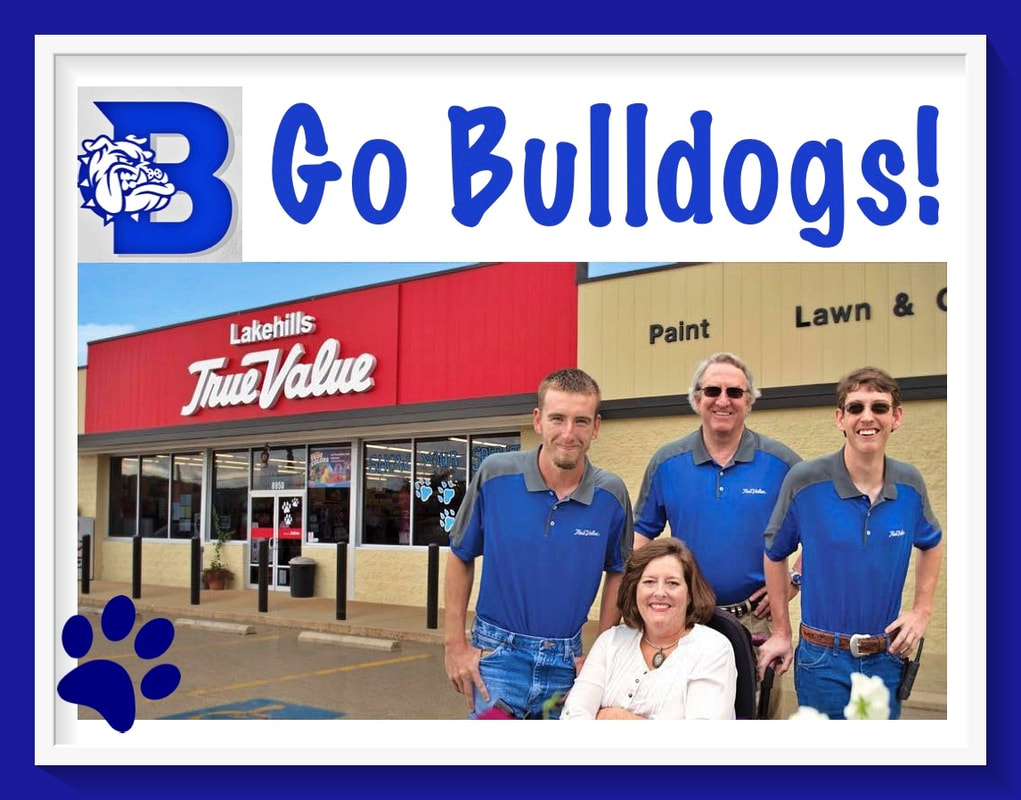 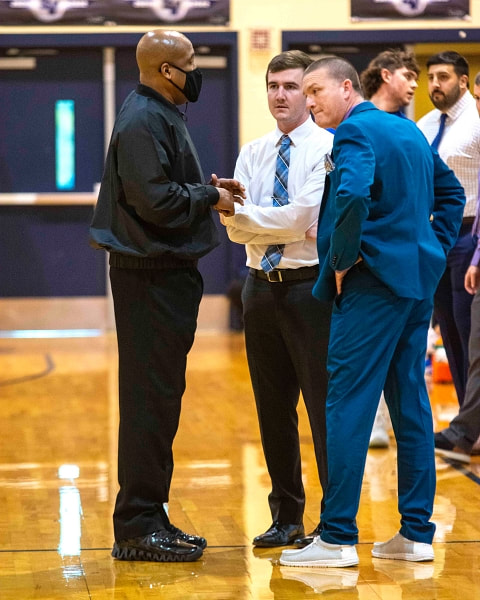 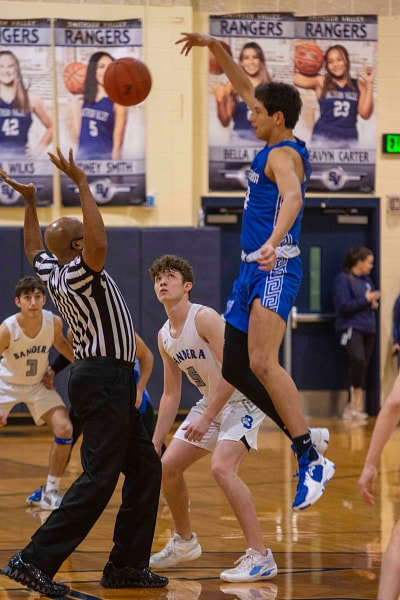 The first half tipoff had to be redone due to the ball not being centered between players. 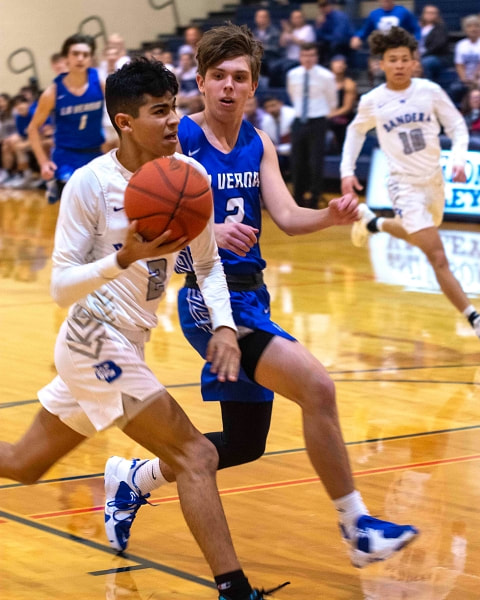 Bandera's Ryan Perez headed for a layup early in the contest. Perez ended up with 6 points on the night. 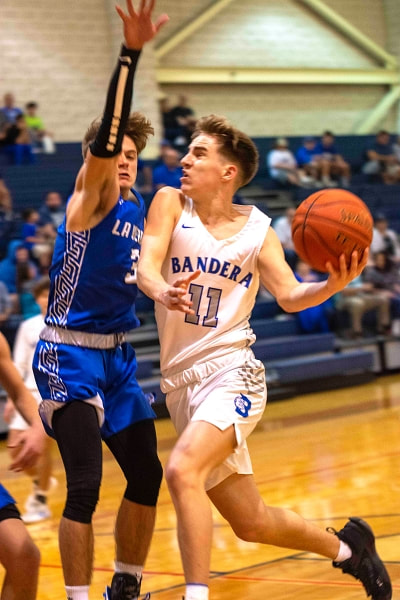 Noah Barnett drives by a Bear on a layup attempt. Barnett had 10 points for the game. 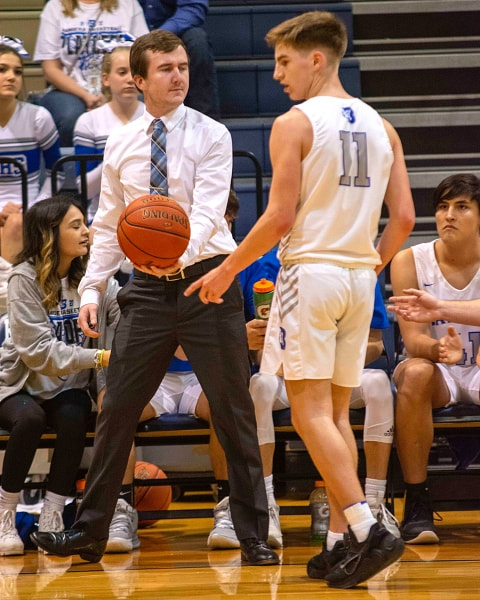 Coach Brady Keane hands the ball to Noah Barnett in front of the Bulldog bench. 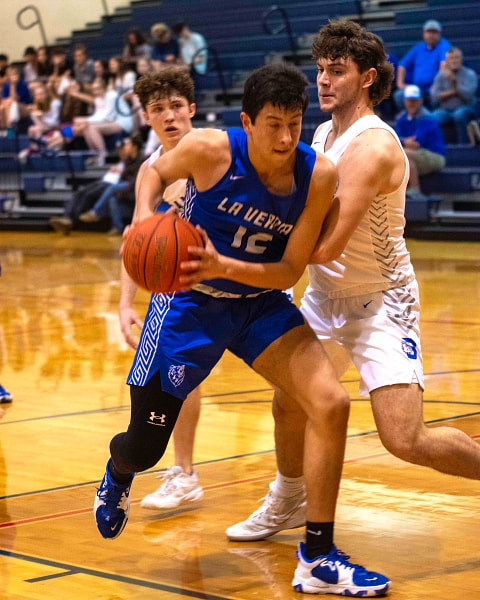 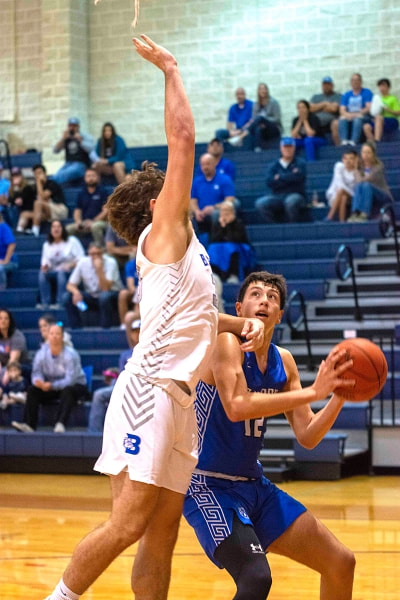 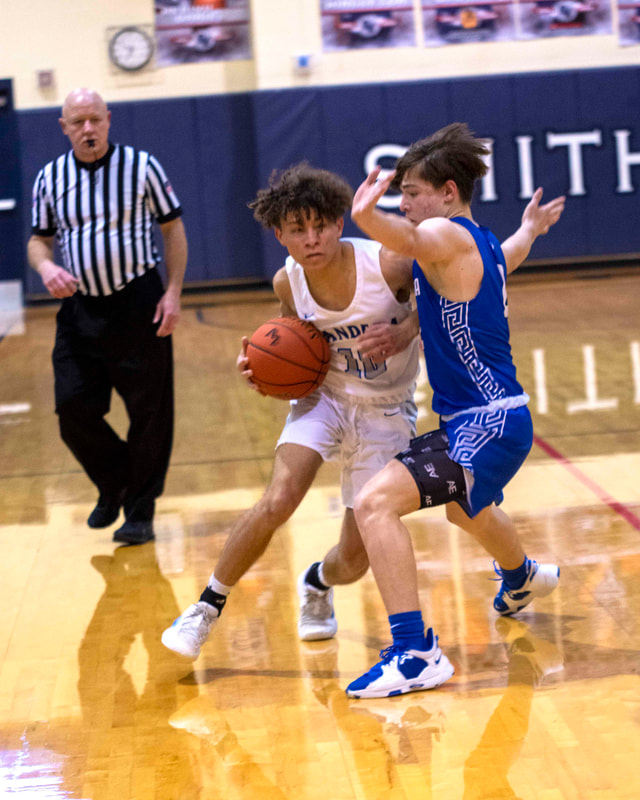 Kayden Brown leans into a Bear as he brings the ball upcourt. 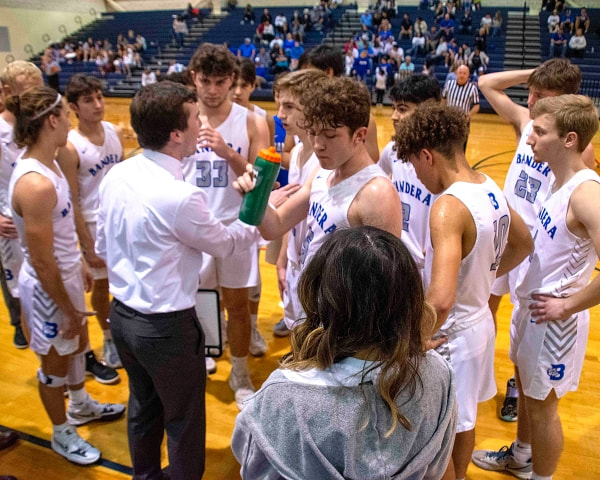 Coach Brady Keane and the team confer late in the game. 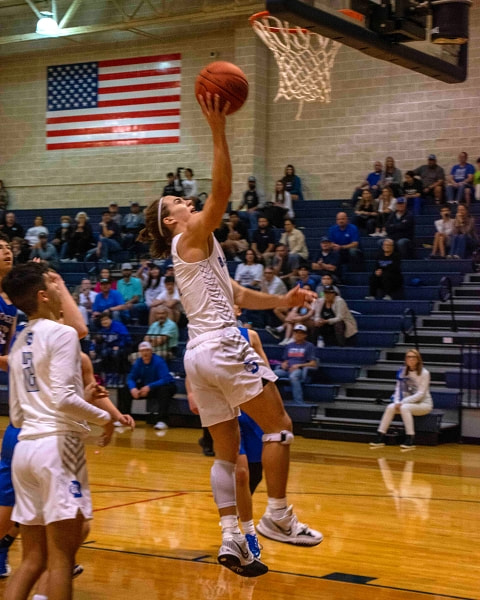 Luke Barnett scores on a layup. 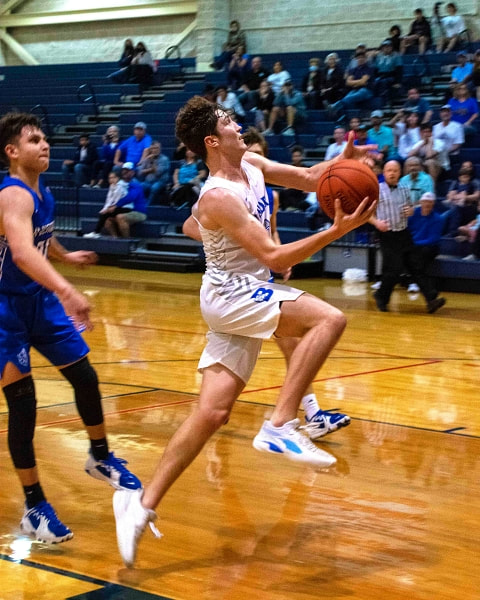 Fans of Bandera and La Vernia varsity boys basketball that made the trip to Smithson Valley got way more than their money’s worth while being treated to a first-round playoff game full of ups and downs worthy of a big budget movie. But in the end, Bandera lost on a last second three pointer launched by La Vernia player Devin Luensmann with less than a second left on the clock, to end up on the short end of a 49-46 score, ending the Bulldogs season.
The Bulldogs played catch up for most of the game, down by 11-6 at the end of the first, battling back to a 22-19 score at the half and tying it up at 30-30 to end the third quarter, then it got real.
After going down, 36-30 early in the fourth, the Bulldogs fought to get back in the game and were down by five with just over 1:30 left in the game when Tyler Moore and Ryan Perez both scored to make it a one point game at 43-42 with 55.5 seconds left.
Bandera was playing aggressive defensively and put the Bears on the free throw line where they made both shots to go up 45-42, but Liam DeMarchi’s layup a short while later made it 45-44.
Again, the Bulldogs put the Bears at the stripe where they went one for two, making it 46-44 and DeMarchi tied it up at 46-46 after nabbing an offensive board and a layup with under 10 seconds left.
Many on both sides were thinking the game might be going to OT, but it wasn’t to be as La Vernia knocked down a 26 foot three pointer as time
expired to win the game with the ball falling through the goal netting as the buzzer finished sounding.
“I hate that our season ended the way it did, but the shot at the end of the game Monday night doesn’t change what this group of guys have accomplished from October to February. We achieved three of our four goals and were one play away from gettin g our fourth goal of winning a playoff game. We won 20 games, won a tournament championship and advanced to the playoffs. I am so thankful to have gotten to work with this senior class. I was their third different head coach in three seasons when I came to Bandera last year, and it would have been easy for them to just continue with the status quo, but they bought in, committed and did everything in their power to be successful this year. I love this group, I am going to miss those guys a ton, and can’t wait to see everything they accomplish after graduating this spring. For the underclassmen, I know this will serve as a source of motivation as we prepare for next season. They have seen what it takes to be successful and will have to turn it up a notch so we can take the next step as a program,” coach Brady Keane said.
Keane mentioned those goals the team had before the season, the season ends with the Bulldogs 22-13, their most wins since 2013-2014,
taking home a tournament championship for the first time in more than decade (Comfort), as well as playing for the tourney championship in Rockport and making the playoffs.
On top of that, this group beat Fredericksburg for the first time in 16 games to make the playoffs, just a little icing on the cake.
“Bandera was led by this year by a senior class that dedicated a large por tion of its spring, summer and fall to putting in extra work in an effort to grow together and have a chance to be successful this year.
Tyler Moore, Ryan Perez, Luke Barnett, Liam DeMarchi, Joseph Kenne dy and Kyle Morgan will be missed greatly, after taking
the program to new heights and led by example in showing the amount of work it takes to have a successful season.
Thank you to everyone for your support of our team this season! It was a heartbreaking end to a great year, but we are looking forward to bouncing back and building on this success next season,” Keane said.