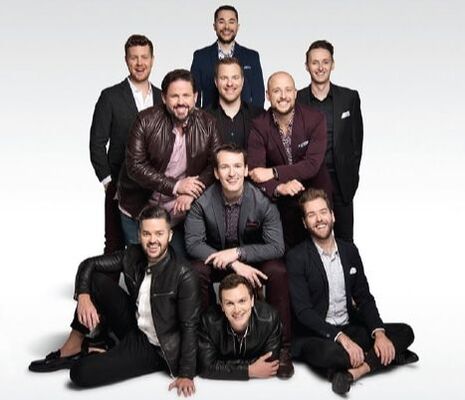 Open your hearts for The Ten Tenors’ record fifth appearance with Boerne Performing Arts on Thursday, Feb. 24, as part of its 10th anniversary season.
Because February is a love-themed month, it is the ideal time to have them here for a romance-filled performance of “Love is in the Air,” packed with favorite love songs, ballads and arias. The evening will be a perfect opportunity for lovebirds and anyone who enjoys a feel-good romantic tune to come and enjoy an evening’s entertainment from the world-class musical artists featuring the signature 10-part harmonies that have made them a beloved musical group around the world.
The Ten Tenors are an Australian music ensemble which has been delighting audiences for over 25 years. They travel extensively around the world but all the singers hale from Australia and New Zealand including Perth, Melbourne, Sydney, Brisbane, Adelaide and Auckland where they are considered a national treasure.
Their individual backgrounds include a wealth of experiences in opera and musical theater that American audiences will surely recognize from The King and I, Madame Butterfly, Les Misérables, Disney’s Beauty and the Beast, Phantom of the Opera and West Side Story all the way to La Traviata and Tosca.
The Ten Tenors embody a love of performing and an ease on stage where their unique personalities and approachable rapport come through as they weave from swoon-inducing ballads to familiar but beautifully harmonized pop songs to even some beloved arias. Their 20 albums to date have been enjoyed by over 90 million people and are all available on Spotify. The Ten Tenors have shared the stage with such diverse artists as Lionel Richie, Rod Stewart, Andera Bocelli, Willie Nelson, Alanis Morissette, and Christina Aguilera.
The sponsors for this show who are helping bring artists of the highest caliber to the stage at Champion High School Auditorium are the City of Boerne, Bandera Electric Cooperative, Hill Country Home and Land, and Boerne Lifestyle Magazine. Local talent will be showcased in the lobby before the show through the artwork of BISD middle school students and a performance by the Champion High School Jazz Ensemble under the direction of Jason Younts. The Boerne Charger Orchestra Parent Organization will be offering concessions.
Tickets ($20-$60) and sneak previews are available on the website for this and all other Boerne Performing Arts events at www.BoernePerformingArts.com. They can also be purchased in person at the Greater Boerne Chamber of Commerce and phone requests may be made at 830-331-9079.
The Bandera Prophet is grounded on the premise that relevant news delivery is ever-evolving. Founded by newspaper veterans, the Prophet delivers up-to-date information by writers and photographers who combined have 50-plus years of experience in the field and newsroom. Always free to readers, the Prophet is published on multiple platforms, and shared within the online community to more than 150,000 people. No paywalls and no paid subscriptions make news and feature stories immediately available with one click of a button or one swipe on a keypad.
​
All content copyright property of The Bandera Prophet