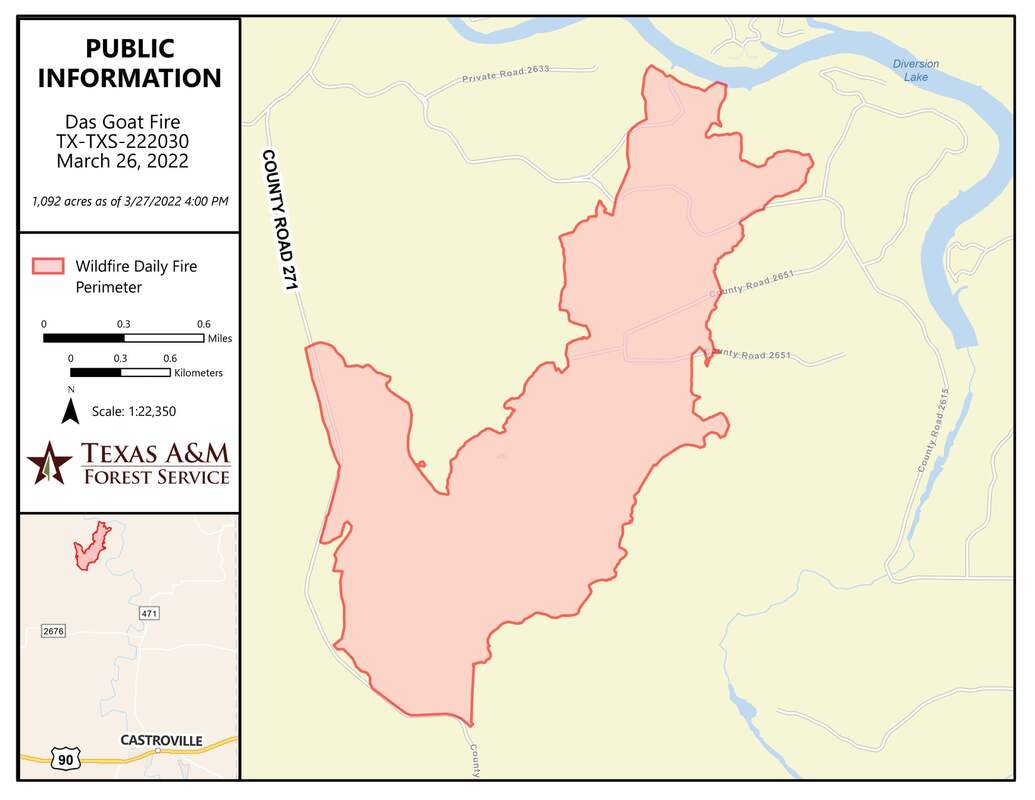 A graphic shows the boundaries of the Medina County fire.

According to the latest update this evening, the Das Goat Fire in Medina County is 50 percent contained.
“Today has been a good day so far. The fire has not advanced very much. Total acreage burned is 1092. The same mandatory evacuation order will remain in place for CR2615 and High Mountain Ranch,” the Medina County Office of Emergency Management stated. “This is still very much a dangerous fire.”
Three homes have burned down, and many more are without power. In Castroville today, Governor Greg Abbott signed a disaster declaration for Medina County.
“This makes available all the state resources that may be needed to respond to this,” Abbott said, adding there is potential for him to request a federal disaster declaration.
More than 200 fire fighters have been on scene to battle the blaze that ignited after a car caught on fire while stopped on the side of the road.
“Yesterday, operational tactics focused on direct and indirect containment line construction and structure protection with ground crews. Aviation resources, including large airtankers, fire boss single engine air tankers and helicopters, provided support via water and retardant drops to help slow the spread of the fire and protect structures,” according to the South Texas Regional Alert Network.
Today, efforts focused on building a containment line on the northern portion of the fire, to prevent it from spreading to the Medina River.
A fire weather warning has been issued by the National Weather Service through Monday at 8 p.m. Wind gusts up to 30 mph are forecast. The relative humidity is expected to increase from below 10 to 40 percent, and a very small rain chance for Tuesday has been predicted.
The Bandera County Sheriff’s Office has mandated no burning of any kind take place in the county.