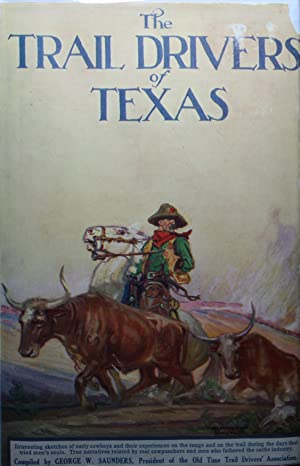 How do stories told by simple men become a part of our Texas history? About 100 years ago, there was an urgent need to capture the stories of the original trail drivers before they were all gone. An estimated 25,000 to 35,000 men drove six to 10 million head of cattle up trails such as the Chisholm Trail and the Western Trail from the end of the Civil War around 1866 to the early 1890s before barb wire and the railroads made the cattle drives obsolete.  This brief moment in time would have a lasting impact on our culture and our idea of our American identity.
A good many of the cowboys were teenagers.  Years later, their memories of crossing raging rivers, controlling stampedes, protecting cattle from wild predators and braving the elements became a part of the cowboy mystique.  But as they died off, this history was in danger of being lost. George Saunders, a San Antonio cattleman and a veteran of the cattle trail himself, established the Old Time Trail Drivers Association in 1915 to give the remaining cowboys a place to be a part of a special brotherhood and to gather to reminiscence. In 1917 at their annual convention in San Antonio, a crowd of 700 to 800 trail drivers had gathered to hear George Saunders reveal his plan to compile and publish a book based on their recollections.
The start of his project did not go well.  After a bad start with an editor who suffered a nervous breakdown, a bankrupt printer who ran off with the original manuscript and the outbreak of World War I, Saunders was not deterred. He sought out a new editor, famed newspaper man and amateur historian, J. Marvin Hunter. Hunter hesitated to take on the job because Saunders was giving him a three-month deadline to complete the book and because he felt he had a huge handicap – he had never been a cowboy, though his father did go up the cattle trail. Hunter soothed his worries with the knowledge he was at least the son of a trail driver.
Working around the clock with little sleep, Hunter met his deadline and delivered the completed Trail Drivers of Texas to Saunders on July 21, 1920. Around 1,000 copies were printed for the first run. Hunter printed the second volume of new stories in 1923 in his new print shop in Bandera, but he would always be ashamed of the poor quality of the printing. In 1924, a corrected and revised version of the first volume was issued. In 1925, the two volumes were combined into a single volume.  This is the volume that has been reprinted throughout the years.
Saunders not only wanted to preserve the cowboys’ history, he wanted the book to be a counter narrative of how cowboys were being portrayed at that time in popular culture as outlaws and wild ruffians. He vigorously defended the cowboy as “generous, brave and ever ready to alleviate personal suffering and share his last crust, his blanket, and often more importantly, his canteen.” The book’s first-person accounts give the reader a snapshot into what life was like going up the trail as well as a more accurate vision of who the true cowboys were.
The Bandera Prophet is grounded on the premise that relevant news delivery is ever-evolving. Founded by newspaper veterans, the Prophet delivers up-to-date information by writers and photographers who combined have 50-plus years of experience in the field and newsroom. Always free to readers, the Prophet is published on multiple platforms, and shared within the online community to more than 150,000 people. No paywalls and no paid subscriptions make news and feature stories immediately available with one click of a button or one swipe on a keypad.
​
All content copyright property of The Bandera Prophet