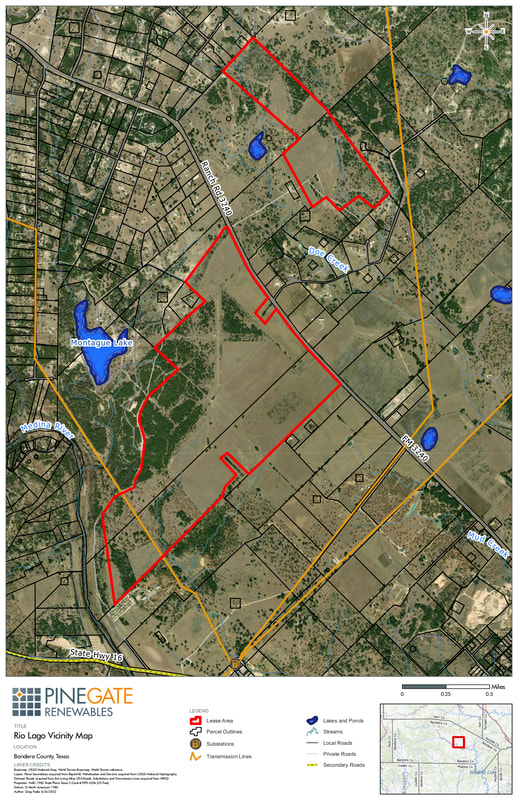 A general map of the project.

By Jessica Nohealapa'ahi
The Bandera Prophet

​After their request for a collaborative relationship with Bandera ISD was voted down by the school district in February, solar power company Pine Gate Renewables, LLC, regrouped. Following a meeting with county officials in June, the solar farm project is back in the spotlight, and construction is set to begin.
“They’re coming, we can’t stop it,” Pct. 3 Commissioner Jack Moseley said, who helped negotiate certain requests.
Moseley said the county asked for underground power lines to eliminate overhead visual clutter, a rock façade in front of the substation, and placement of the substation - and panels - at least 200 feet away from the road.
The project, renamed Rio Lago Solar (originally introduced as Montague Solar, LLC), has had a lease in place with the owner of the private property on FM 3240, formerly known as the LH7 ranch, for two years. Proposed plans include building a 120-megawatt, approximately 1,000-acre solar farm that connects directly into the electrical grid controlled by BEC.
“It’s the same property, with some minor changes in the project boundaries and panel layout,” Senior Manager Alan Hancock said, adding most of the land is south on FM 3240; there is a lease with the property owner on the north side of FM 3240. “The number of panels may change - as the market develops they get more efficient. [It’s] still a little early in the process.”
In February, Bandera ISD board trustees voted unanimously against a Chapter 313 agreement, terminating the comptroller application under the Texas tax code. Pine Gate stated it did not require the district’s cooperation to proceed with the multi-million dollar project.
Hancock said construction would begin mid 2023. The solar farm is expected to be operational in late 2024.
“We’ve done our best to recognize that Bandera and the Texas Hill Country in general is a special place. Bandera really relies on tourism so we want to make sure we blend into the environment as much as we can,” Hancock said.
He said the solar panels may still be visible from the road, “but it will be a little less apparent.”
Hancock said during construction, about 200 people will be involved.
“We’ll do as much of that as we can locally from Bandera County, and some from San Antonio,” Hancock said.
Once online, at least one person will monitor the site and maintain the property. The system will also be monitored remotely 24/7.
“If a panel has a problem, we’ll know it immediately,” Hancock said.
The current land lease is 20 years. Hancock said there may be opportunities with the land owners to renew, extending the lifespan of the solar farm to 30 or 40 years. He said the decommissioning plan involves removing the panels, and recycling or disposing them; pulling the supports out of the ground; and regrading the land so that it's restored to its original state.
Hancock said Pine Gate, based in Asheville, N.C., has no plans at the moment to apply for any county-level tax abatements.
“We want to make sure that we’re meeting the commitments we’ve agreed to with the county,” he said. “We plan to have a good working relationship.”
For more information, go to https://pinegaterenewables.com/rio-lago/
The Bandera Prophet is grounded on the premise that relevant news delivery is ever-evolving. Founded by newspaper veterans, the Prophet delivers up-to-date information by writers and photographers who combined have 50-plus years of experience in the field and newsroom. Completely free to readers, the Prophet is published on multiple platforms, and shared within the online community. No paywalls and no paid subscriptions
make news, sports, feature stories and more immediately available with one click of a button or one swipe on a keypad.
All content copyright property of The Bandera Prophet