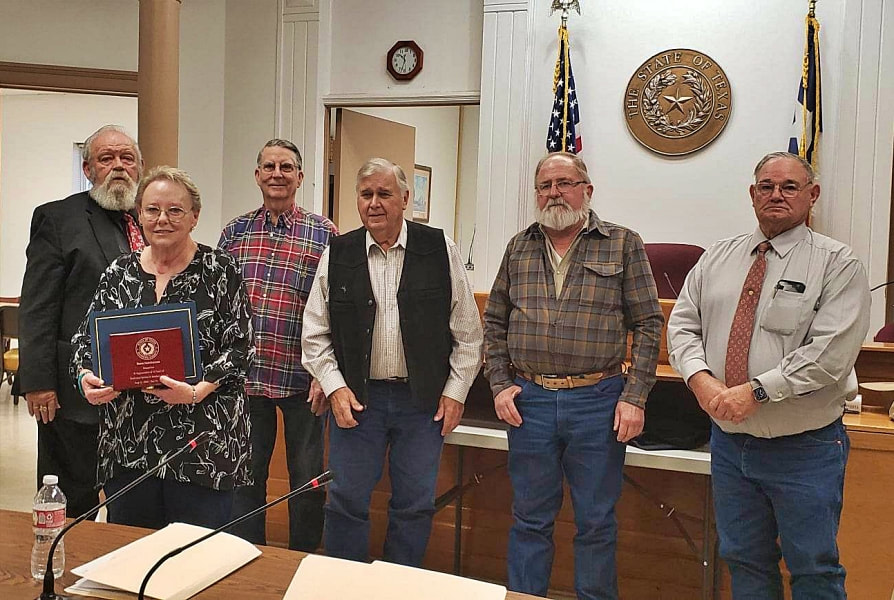 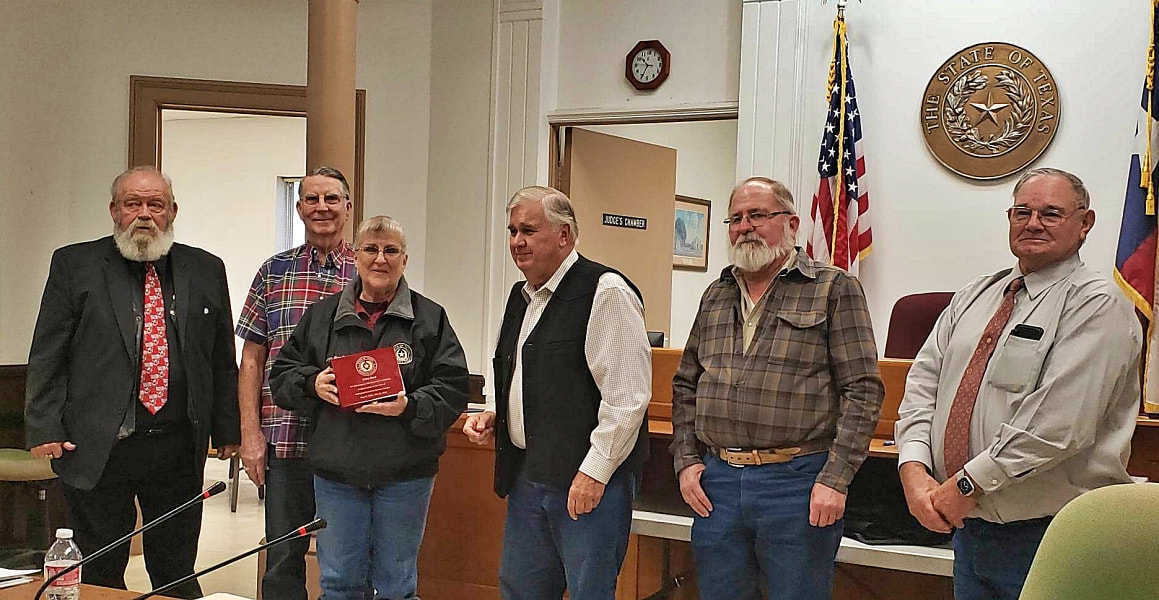 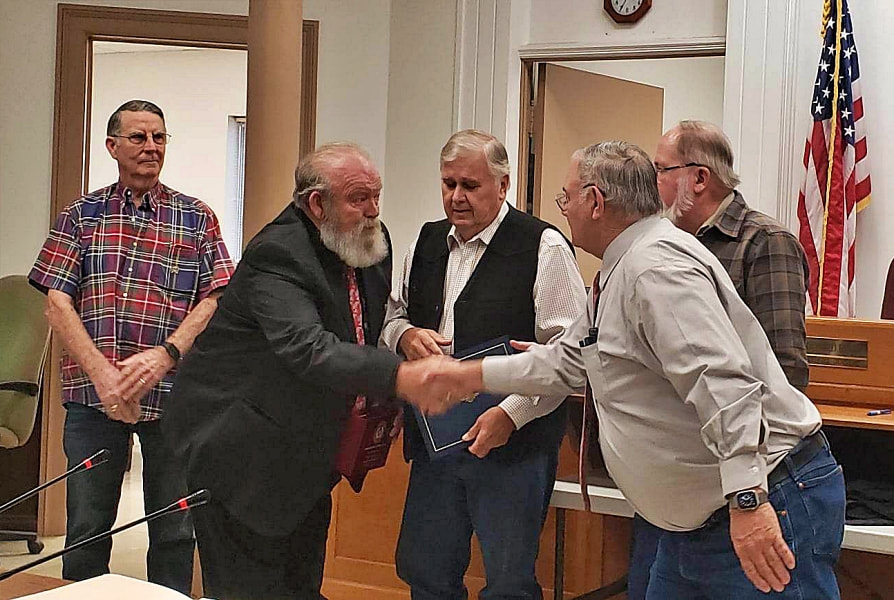 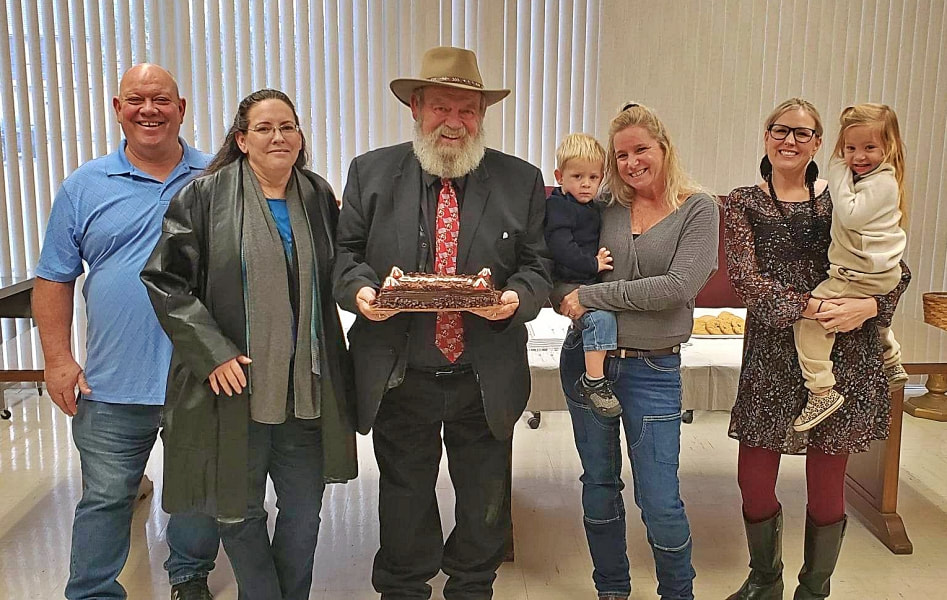 Bandera County commissioners honored three tenured members of the county team, who will begin their retirements at the beginning of the New Year. Pct. 2 Commissioner Bobby Harris, Dispatcher Dana Hutcherson, and Emergency Management Coordinator Carey Reed will hang their hats Dec. 31.
“You have very big shoes to fill,” County Judge Richard Evans said to incoming commissioner Greg Grothues, who will replace Harris on Jan. 1.
“It’s been my honor, and a pleasure, to serve the citizens of Bandera County,” Harris said, who has served four terms.
Reed began her career with the county Aug. 29, 1994. At Thursday’s meeting, she introduced Judy Lefevers, who will replace her as emergency management coordinator on Jan. 1.
Hutcherson is retiring after 19 years with the Sheriff’s Office as a 911 dispatcher.

~ In other business, commissioners approved sponsoring applicants for the EMS Workforce grant through South Texas Regional Advisory Council for education and training. EMS Director Shannon Griffin said Bandera County would sponsor two applicants, a Bandera County EMT basic and an EMT intermediate, who plan to become paramedics.
Griffin said the course, which costs between $5,000 and $8,000, would be completely funded by the grant.

~ Commissioners unanimously approved increased rates at Mansfield Park.
“We are about $12 cheaper than everybody else,” Pct. 3 Commissioner Jack Moseley said regarding the RV park. “The RV market is big in Bandera County.”
Moseley said the arena, show barn and rec hall rental rates were raised by 20 percent. The arena increased from $125 to $150 for daytime use; and from $175 to $210 for nighttime use with lights.
Moseley said he did not increase camping fees because Lost Maples and the Hill Country State Natural Areas are the same price.
“Are you sure you want to raise it for the locals?” Pct. 4 Commissioner Jordan Rutherford said. “I’m really not in favor of raising it that much.”
Moseley said utility hikes necessitated the increases, adding the rates had not been changed since he took office in 2017.
“I think the price increases are in line because everything has gone crazy in this world,” Harris said.

~ Bandera County Sheriff Butts said for November, the Sheriff’s Office received 608 calls for service; deputies traveled 24,141 miles with an average response time of 14.22 minutes.
Deputies made 23 arrests: 11 felony and 12 misdemeanor; and investigated 27 property crimes and 51 crimes against a person. Dispatch received 122 animal calls; 42 dogs were picked up and zero cats; the average dog population was 29.
Dispatchers received or made 7,090 calls and received 1,040 911 calls; 51 people were booked into the county jail; the average inmate population was 65 - of those seven were contract inmates.

Griffin said EMS received 246 calls for service in November. EMTs traveled 13,979 miles; the average tone to response time was 59 seconds; the average tone to on scene time was 10.38 minutes.
The Bandera Prophet is grounded on the premise that relevant news delivery is ever-evolving. Founded by newspaper veterans, the Prophet delivers up-to-date information by writers and photographers who combined have 50-plus years of experience in the field and newsroom.
Completely free to readers, the Prophet is published on multiple platforms, and shared within the online community. No paywalls and no paid subscriptions required, the Prophet is built on the belief that information is so necessary to our community, that it should not depend on your income.
At the Prophet, news, sports, feature stories and more are immediately available with one click of a button or one swipe on a keypad.
All content copyright property of The Bandera Prophet