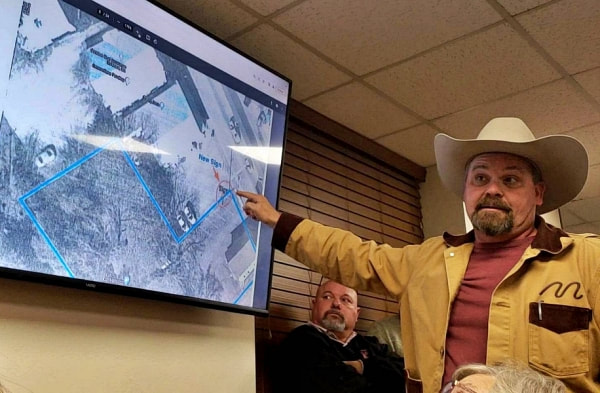 Kevin Meier points to a map that shows the location of his business.

Shutting down a Night Sky presentation by Hill Country Alliance Program Director Cliff Kaplan, Bandera City Council members disputed and debated the video before a 3-2 vote to halt discussion. Mayor Rebeca Gibson attempted to give Kaplan the floor before Attorney Dan Santee said council members had the right to make a motion and call point of order.
Councilmember Lynn Palmer, who said she submitted a Dec. 21 agenda item to discuss and take action on an outdoor lighting ordinance and the sign ordinance, said her requests were changed to workshops.
“I submitted these two agenda items with my name for action, not for a workshop,” Palmer said, with Councilmember Jerry Russe concurring that was his intent, as well.
Palmer said the outdoor lighting ordinance would take effect Feb. 6, 2023, and anyone not in compliance with outdoor fixtures on their homes and businesses could be fined.
“Citizens may not have been educated or notified by the city,” Palmer said, adding that was why she rushed to get the item on the agenda. “I think the residents should be able to light up their yards. This ordinance will put a burden on our residents and businesses.”
Gibson said the ordinance, approved almost five years ago, was already in effect.
“This ordinance is what we agreed on. There was a lot of citizen involvement,” Gibson said, adding Feb. 6 was a comply-by date.
Based on the diagram, Councilmember Tony Battle said, a light over a kitchen table that shines out of a window was not in compliance. Calling it government overreach, Palmer said she wanted to repeal the ordinance.
“We are not a night sky city,” Palmer said.
“The citizens inside the city have enough hardships, to then go and tell folks that you have to take the light over your kitchen table away and shield your lamps.” Battle said, calling the ordinance too broad and encapsulating.
“I would like to move forward. I requested this be on the agenda, and I would like to end the workshop because I would like to repeal this ordinance. We cannot make a motion during the workshop, so I would like this item go away,” Palmer said.
Santee told council members they could vote to abate enforcement of the ordinance while they deliberate.
“May I remind council there are years that went into this ahead of adopting an ordinance. I’m in agreement that the ordinance is need of work, but it goes against the spirit of the intent.” Gibson said.
“Your spirit is dark skies, and we are not a dark skies city,” Palmer said.
Russe, Battle and Councilmember Jeff Flowers sounded their support that the ordinance, or the enforcement of, appear on council’s Jan. 3 meeting agenda for discussion.
Palmer said she also wanted the sign ordinance on the next meeting agenda for discussion and possible action.
“We need to discuss this sign ordinance again, so that what happened to Mr. [Kevin] Meier, a business man who is building a multi-million dollar building on Main Street, does not happen again,” Palmer said. “Everything that Mr. Meier has paid for and gone through was null and void, not caught by the city, and he went through this process for nothing. Whatever process we decide to move forward with, any fees for him need to be waived.”
Earlier this year, council denied Meier's special use permit request for a CVEM (Changing Electronic Variable Message) sign, which he intended to install at 603 Main Street. Meier asked for a variance to install the digital sign with a six-foot setback, instead of the ordinance-mandated 10 feet from the city’s easement. His request was initially approved by the Planning and Zoning Commission, however council rejected their recommendation, denying the sign in its entirety.
“There are businesses in town with these signs. In a clear political move, someone thought there should be a workshop, instead of an action item,” Russell Hevenor said, showing support for Meier. “In a shocking move, the City Council ignored the recommendation of the P&Z, the city administrator, and the undisputed facts that the sign fell within regulations. They simply did not like the sign, so they voted it down. Bandera is not currently a night sky city…[although] the sign comes out of the box completely night sky compliant…Progress seems to be a bad word in Bandera. Do we tear out the asphault and go back to an 1890s dirt street?”
Gibson said the sign debate was not a dark skies issue, clarifying the International Dark Skies Association has recommendations for outdoor digital signage, and stated the Texas Department of Transportation studies show they do not pose a safety threat.
Voicing her opposition, Josie Evans said the signs are visual noise.
“I don’t have a personal agenda to see any business fail, but it is my duty to express that I do not love the aesthetic of the electronic signs,” Evans said. “People come here to get away from the hustle and the lights and the sounds.”
Identifying numerous inconsistencies with the Simple City place type zoning, council directed Santee to draft options to remove special use permits from the ordinance and bring it back to council for further discussion.

~ In other business, Russe was appointed mayor pro tem in a unanimous decision.

​~ After about 30 minutes in executive session, council unanimously approved no further investigation into a complaint issued against City Administrator William Cox.
The Bandera Prophet is grounded on the premise that relevant news delivery is ever-evolving. Founded by newspaper veterans, the Prophet delivers up-to-date information by writers and photographers who combined have 50-plus years of experience in the field and newsroom.
Completely free to readers, the Prophet is published on multiple platforms, and shared within the online community. No paywalls and no paid subscriptions required, the Prophet is built on the belief that information is so necessary to our community, that it should not depend on your income.
At the Prophet, news, sports, feature stories and more are immediately available with one click of a button or one swipe on a keypad.
All content copyright property of The Bandera Prophet