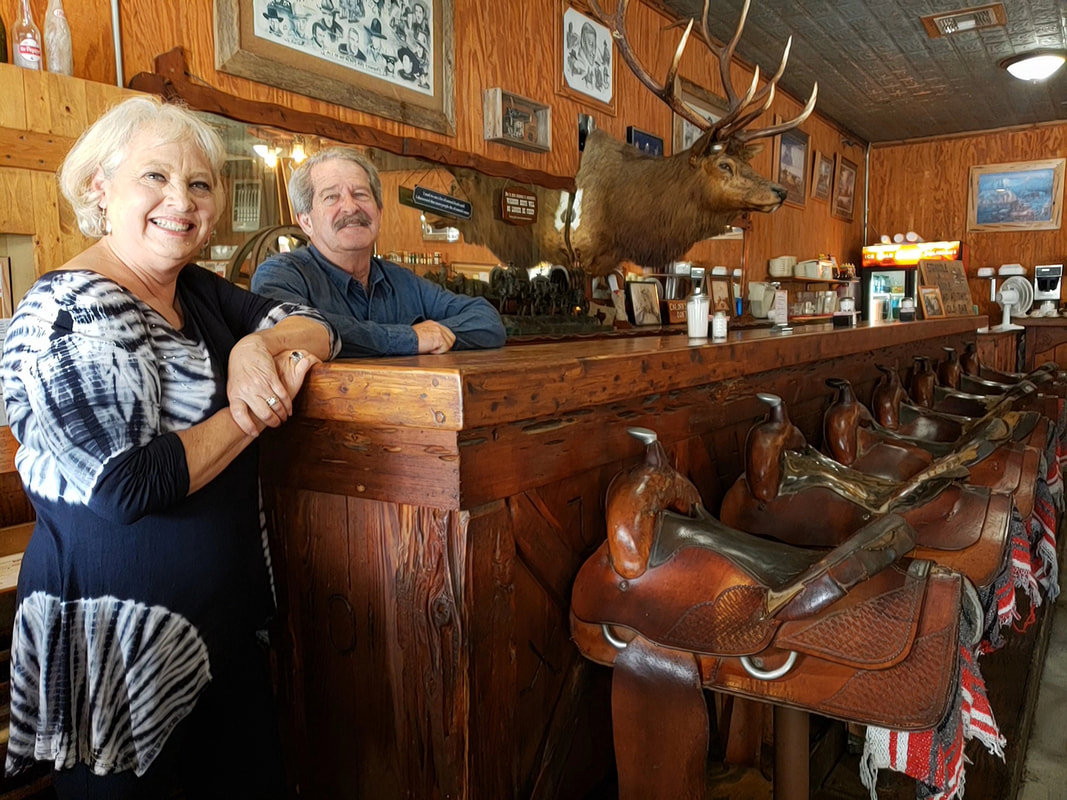 By Miranda Koerner
​The Bandera Prophet 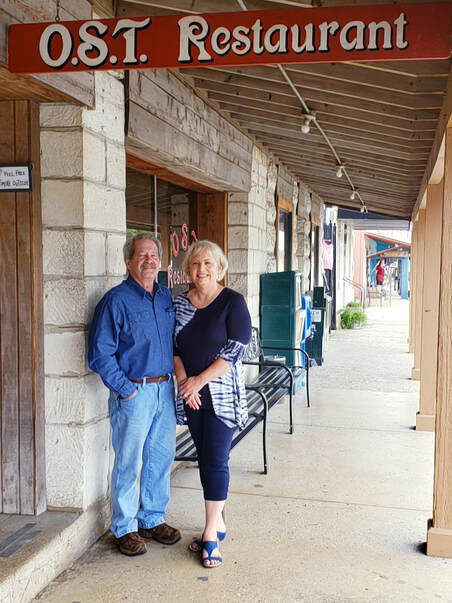 Rick and Gwen Janes, owners of the OST on Main Street in Bandera, will celebrate the restaurant's 100th year in 2021.
Since 1921, the OST has held a spot in Bandera’s heart. Just like going to mama’s for dinner, the food never changes and there’s always a spot at your favorite table. But sometimes, even mama needs a break from cooking.
Gwen Janes, who has owned the OST (Old Spanish Trail) for 40 years, said that while she’s thinking of retiring from being the restaurant’s official pie lady, like any good mama, she’s having a hard time hanging up her apron.
​“I think 40 years is long enough for anyone to own a restaurant,” Janes said. “The average is seven years because it’s hard. We’d like to travel and do some stuff. My husband is 70 and I’m 62. I love (the OST), but I’m tired. It’s a love-hate relationship. I’m tired, but when I think of selling it’s like what would I do? I don’t know what I’d do without it.”
Patrons of the OST might be more familiar with manager Kim Held or Jane’s stepdaughter Michelle Janes-Restivo’s smiling faces at the front, but Janes is the powerhouse in the kitchen. Janes makes all the pies and most of the desserts for the Main Street staple, including the famous buttermilk pie, cheesecake, meringue pie, apple pie and pecan pies.
“I’ve always been a baker,” Janes said. “Plus, as an owner, you’re cheap labor!”
Jane-Restivo says that while her step-mother is shy, she puts her heart and soul into the OST, even if most people don’t see her past the kitchen. She said when a 2012 fire destroyed the building next door and caused significant smoke damage, she watched Janes work day and night to get it back together.
“When she brings her pies out, people ooh and ahh,” Jane-Restivo said. “When the fire happened, she had it up and running in four days over Memorial Day weekend. It’s a historical icon. She’s very dedicated and works hard. She may be shy, but she’s a hard and diligent worker. Most people don’t know her, but she puts everything into the OST.”
Kim Held, a manager at the OST, said Janes helps keep the “old” Bandera alive.
“She’s a very good person,” Held said. “She’s very good at knowing what people need and want. She’s kept the OST like an old restaurant, old town, like it used to be what the people like.  It’s not like these new restaurants coming into town. We’ve got a lot of memories.”
Janes takes a lot of pride that the OST remains classic cowboy Bandera. She boasts about the saddle bar that kids can crawl up on and have an ice cream float and says her favorite times have been chatting with the locals coming in for breakfast.
“It’s a local hang out,” Janes said. “The OST is an icon. It’s Bandera. We’ve seen a lot of fast food move in and it’s kind of sad to see Bandera as the Cowboy Capital and now see all this fast food in town. We’re still here. We’ve seen a lot of things come and go. I think the saddest part is seeing all the old guys coming in for coffee and now they’re gone. You get a friendship with these old guys and one day they’re all gone. A whole table gone. That’s the hardest part of owning a business so long. “
Janes never planned to run a restaurant. She attended nursing school before a divorce made her reconsider her career plans. Now, she said her only regret in being in the restaurant business so long is how much time it took away from family.
“I kept this letter my son wrote because he said, ‘I wish my mama didn’t have to work so much so we can spend some time together,’” Janes said. “It gets you when you hear your kid say that but that’s the business.”
However,  Held says Janes makes sure they have a good time, both in the kitchen and out of it.
“We’ve been through so much together,” Held said. “She makes it enjoyable for us to work. On weekends even when it’s rough or holidays she makes it fun. She’s very good at helping people and goes out of way to help. She doesn’t have to do that.”
The OST is on Main Street, wedged between Shoe Biz, another Main Street mainstay, and O’Neals Florist. Hours are Sunday: 7 a.m. to 8 p.m.; Monday through Thursday: 6 a.m. to 8 p.m.; Friday: 6 a.m. to 9 p.m.; and Saturday: 6 a.m. to 9 p.m. For more information, go to ostbandera.com, or call 830-796-3836.
The Bandera Prophet is grounded on the premise that relevant news delivery is ever-evolving. Founded by newspaper veterans, the Prophet delivers up-to-date information by writers and photographers who combined have 50-plus years of experience in the field and newsroom. Always free to readers, the Prophet is published on multiple platforms, and shared within the online community to more than 150,000 people. No paywalls and no paid subscriptions make news and feature stories immediately available with one click of a button or one swipe on a keypad.
​
All content copyright property of The Bandera Prophet