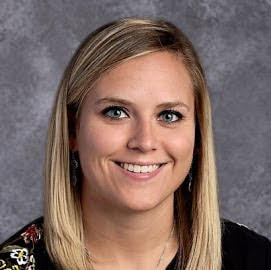 Kierstyn Dumont
Kierstyn Dumont was named the new Varsity Girls Basketball Head Coach for Bandera High School on Friday, May 24.
Dumont has been with Bandera ISD since she graduated from UT-Austin with a BS in Mathematics and has progressed from coaching at Bandera Middle School to head JV and assistant varsity girls basketball coach to her new position.
“I have loved being a part of the girls athletic program and basketball team for the last three years. I have learned a great deal and can’t wait to see what the future holds as we continue to strive for greatness and build the girls basketball program here at BHS,” Dumont said.

Students sign Letters of Intent
Two Bandera High School students will sign Letters of Intent on Friday afternoon.
Salma Gutierrez will sign with UT-Permian Basin to run cross-county while attending school in Odessa. Gutierrez was a member of the Lady Bulldog 4A state championship winning team in 2017.
Sullivan Wilke has committed to UIW (University of Incarnate Word) in San Antonio where she will continue to high jump and take on the javelin as well.
Wilke is the current 4A Girls State Champion in the High Jump and a member of the Texas Girls Coaches Associations 1A-4A Legacy All-Star Track and Field Team.

Softball
Breaking from usual tradition, the UIL has allowed school districts with teams still left in the state softball playoffs to release their All-District lists. Bandera falls into this category as the Fredericksburg Lady Billies are one of four teams left and will play today in one of two semi-final games.
Bandera has three players being named to First Team All-District with Morgan Pardee and Sullivan Wilke (Infielders) and Lindsay Brown (Outfielder) being recognized. All three are seniors.
Junior Penelope Garcia (Pitcher) and sophomore Cami Chesler (Infielder) were named to Second Team All-District honors.
Senior Mattie Morrison and junior Jaimie Whalen were named to the Honorable Mention All-District Team.
The Academic All-District Team acknowledged five of the above named students, Brown, Wilke, Morrison, Pardee, and Whalen as well as senior, Jean Dickinson, junior, Caitlyn Watson, sophomores Rayney Brown and Celeste Martinez and freshman, Maci Morrison for their excellence in the classroom.
In addition, Dickinson, Morrison and Wilke were named to the Academic First Team All-State list and Pardee was an Academic Second Team All-State selection.

MISD Summer Sports Camps
Medina ISD is wasting no time in getting their summer sports camps underway.
All camps are $10 each and are restricted to incoming second to ninth graders except for volleyball, which is for incoming sixth through ninth graders.
Basketball camps for both boys and girls run from June 3 to June 4 with split starting times depending on what grade the campers are in but both will end at noon.
Baseball and Softball camps will run concurrently on June 3-4 as well with the split starting times.
Football camp will run on June 5-6 and Volleyball will happen on July 22-23.
Contact coach Dawn Tisdale at 956-802-6224 for more info.
The Bandera Prophet is grounded on the premise that relevant news delivery is ever-evolving. Founded by newspaper veterans, the Prophet delivers up-to-date information by writers and photographers who combined have 50-plus years of experience in the field and newsroom. Always free to readers, the Prophet is published on multiple platforms, and shared within the online community to more than 150,000 people. No paywalls and no paid subscriptions make news and feature stories immediately available with one click of a button or one swipe on a keypad.
​
All content copyright property of The Bandera Prophet