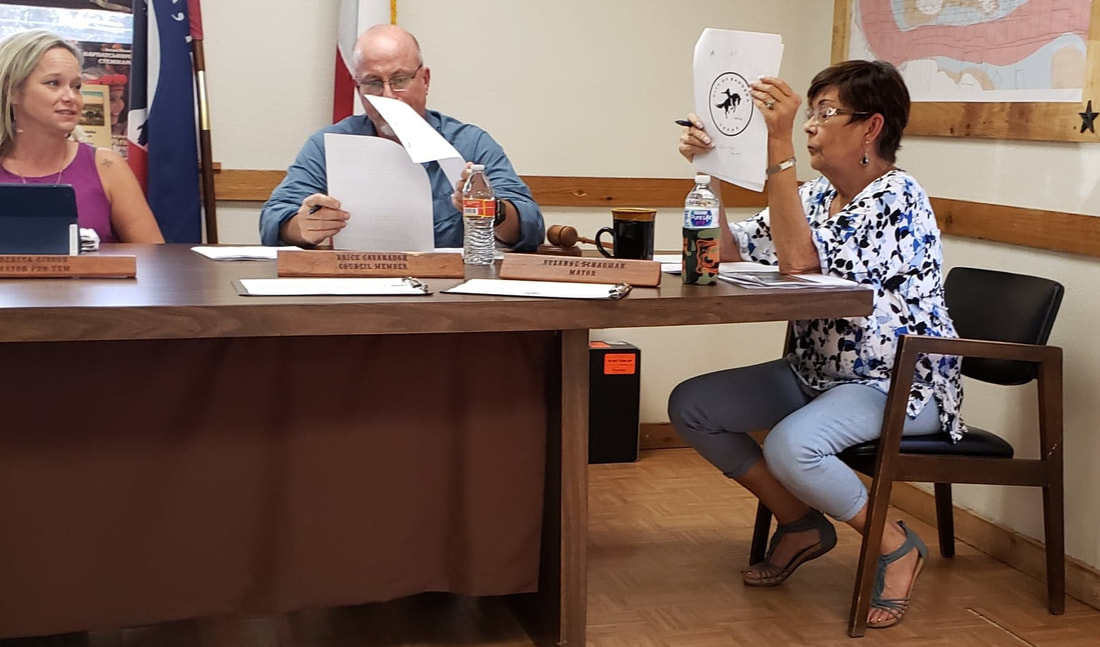 The quest for a new city logo has been indefinitely placed on the back burner. Unable to reach a consensus, Bandera City Council members have agreed to disagree, thereby stalling any changes to the city’s trademark emblem.
Earlier this year, local artists were invited to submit illustrations for a new logo to be placed on the city’s trucks, letterhead and T-shirts. After a seven-person committee judged and prioritized the submissions, the top three designs were presented to city council two weeks ago. Last Thursday, those and a few other drawings made the chopping block, however none survived it.
Council Member Lynn Palmer motioned to approve three different designs, which she said were clean, clear, easy to read and captured the essence of the cowboy. All of her motions died for lack of a majority vote.
“We should hire a professional to rebrand Bandera,” Council Member Rebeca Gibson said, echoing her sentiment from the May 23 meeting, when she said she wanted to consult someone in the marketing and branding field. “This is a very serious image…maybe something professionally done would be in the city’s better interest.”
Concerned about the cost, Mayor Suzanne Schauman asked how many thousands of dollars the city would have to spend on professional services. Further, Palmer said some of the artists have backgrounds in advertising and work in that industry.
“I think I could make some of these on Microsoft Word,” Gibson said.
After a tie-vote on a final design in which Council Member Glenn Clark abstained, Schauman delivered the killing break with a nay.
“If y’all don’t want to change the logo, we can let this die right now,” Schauman said. “We can’t come to an agreement. We can look at it again down the line.”
Later in the meeting, Clark said he wanted to revisit city employee paid holidays and other pressing matters.
“I would like to see council discuss more important issues than the city logo,” Clark said.
Schauman said city employees currently receive 16 holidays, which she called “ridiculous.”
Clark said he wanted to know what the city’s cost per holiday is.
“If we give the whole city crew the day off, how much does that cost?” Clark said, adding he believes the expense will be huge once health insurance and other benefits are factored in. ​
The Bandera Prophet is grounded on the premise that relevant news delivery is ever-evolving. Founded by newspaper veterans, the Prophet delivers up-to-date information by writers and photographers who combined have 50-plus years of experience in the field and newsroom. Completely free to readers, the Prophet is published on multiple platforms, and shared within the online community. No paywalls and no paid subscriptions
make news, sports, feature stories and more immediately available with one click of a button or one swipe on a keypad.
All content copyright property of The Bandera Prophet