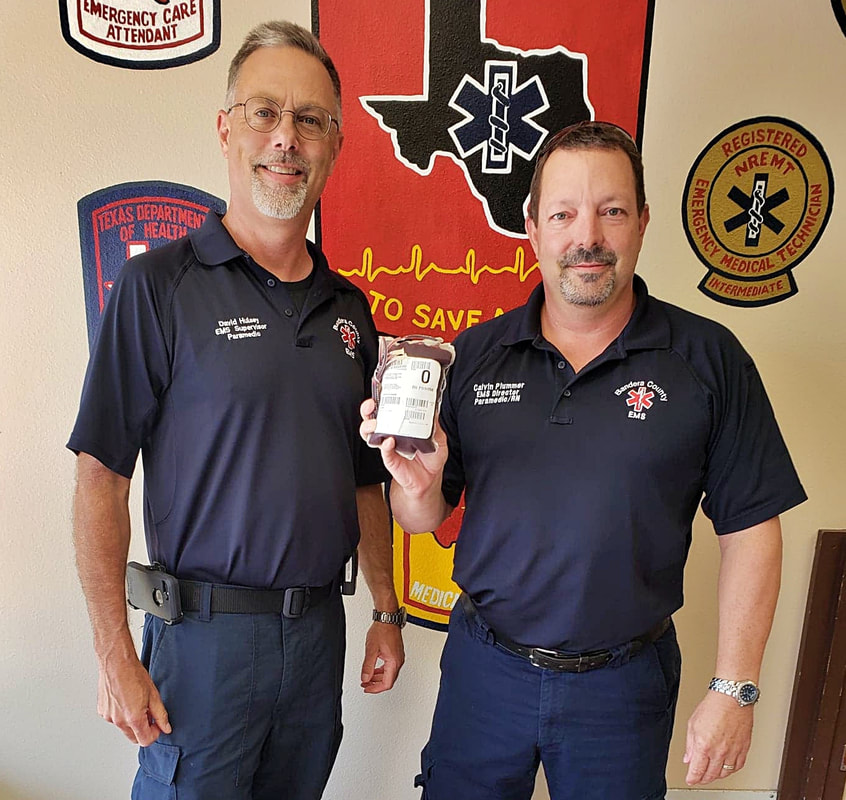 In an emergency, seconds can mean the difference between life and death. As of July 1, Bandera County EMS is stocked with whole blood, and EMS Director Calvin Plummer believes that will help save lives.
Yesterday morning, Plummer picked up a supply of O-Positive blood from the South Texas Blood and Tissue Center. Considered the universal alternative for all blood types, the blood can buy precious minutes during the transition between ambulance and hospital.
O-Negative is the first choice as a universal donor, however about seven percent of the population has O-Negative blood type, which makes it high-demand and short-supply, Plummer said. The backup, he said, is O-Positive - specifically from male donors. Because men have lower titers, there is a decreased risk of different blood types attacking each other.
“Transfusions of incompatible blood types cause reactions,” Plummer said.
In an emergency where there’s blood loss, often the time it takes to type someone’s blood takes too long. In those cases, a universal blood type is administered.
“In the ER, they’re already behind the curve,” Plummer said. “If a patient requires a mass transfusion protocol, the hospital needs the blood before they get there.”
Cases in Bexar County indicated that patients who were less than 20 minutes from a hospital had a higher survival rate than those who were further away. That golden 20 minutes in which a necessary transfusion was started has proven critical in a patient’s survival.
“It takes a helicopter 20 to 21 minutes to land,” Plummer said, adding LifeFlight helicopters are also supplied with O-Positive blood. “We’re going to be able to start that unit of blood right away.”
Each unit of blood has a 35-day shelf life. After two weeks, any blood not used will be rotated with a fresh supply. The unused units will be sent to University Hospital in San Antonio, where there is higher demand.
Plummer said four patients who called for help at the beginning of April would have benefitted from an immediate blood transfusion.
“There were fatalities,” Plummer said. “There were [other] patients that received blood in the [LifeFlight] helicopter. They used their supply and saved lives.”
The Bandera Prophet is grounded on the premise that relevant news delivery is ever-evolving. Founded by newspaper veterans, the Prophet delivers up-to-date information by writers and photographers who combined have 50-plus years of experience in the field and newsroom. Completely free to readers, the Prophet is published on multiple platforms, and shared within the online community. No paywalls and no paid subscriptions
make news, sports, feature stories and more immediately available with one click of a button or one swipe on a keypad.
All content copyright property of The Bandera Prophet