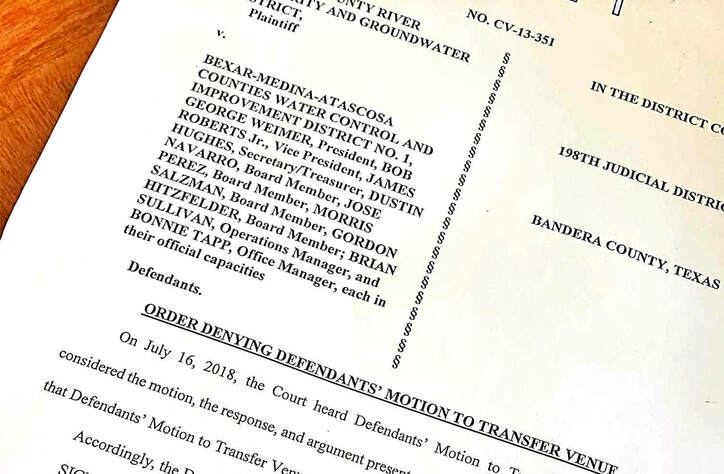 In a judgment filed at 1 p.m. on Thursday, July 18, District Judge Rex Emerson denied BMA’s motion to transfer venue.
BMA Attorney Shawn Fitzpatrick argued in court on Tuesday that the lawsuit naming Bexar-Medina-Atascosa Water Control and Improvement District No. 1 and its officers as defendants should be moved to Medina County. Countering the motion was Drew Miller, attorney for plaintiff Bandera County River Authority and Groundwater District.
After hearing both sides, Emerson convened to consider their objections.
“Having considered the motion, the response and argument presented by counsel, the court has determined that defendants’ motion to transfer venue should be denied,” Emerson wrote in his order. “Accordingly, the defendants’ motion to transfer venue is hereby denied.”
A subsequent court hearing date has not yet been set. ​
The Bandera Prophet is grounded on the premise that relevant news delivery is ever-evolving. Founded by newspaper veterans, the Prophet delivers up-to-date information by writers and photographers who combined have 50-plus years of experience in the field and newsroom. Completely free to readers, the Prophet is published on multiple platforms, and shared within the online community. No paywalls and no paid subscriptions
make news, sports, feature stories and more immediately available with one click of a button or one swipe on a keypad.
All content copyright property of The Bandera Prophet