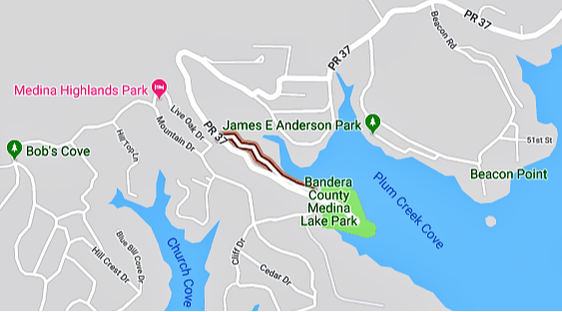 Every cloud has a silver lining, and every silver lining has a cloud. Summertime at Medina Lake during drought isn’t much of a draw, other than to kick up dust and fossil hunt in an empty basin. But this year, the lake has been at 100 percent capacity, and as much of a blessing that is, it still comes with problems.
“The lake is full,” Bandera County Judge Richard Evans said during commissioners’ July 25 regular court session. “When the lake is full, we have issues.”
Of particular concern is Plum Cove, which the county park shares with the San Antonio Police Benevolent Fund (SAPBF) at James Anderson Memorial Park. Popular for shoreline playing and swimming, the area has become hazardous due to boat traffic.
“We have a slew of jet skis and wave runners running up and down Plum Cove, and swimmers and up and down both sides of the cove,” Pct. 2 Commissioner Bobby Harris said. “There’s a lot of reckless behavior.”
No wake zones buoys are in place at the County Park in Lakehills and the SAPBF has placed buoys at the cove, but the game warden said in order to enforce those buoys, the county must designate the area as a No Wake Zone.
Because the water level of the lake fluctuates with natural evaporation and irrigating downstream, which Harris said is happening now, some discussion was had over how to define unequivocally where the zone is. In 2005, the zone was 75 feet from the shoreline, County Judge Richard Evans said.
“There will come a time unfortunately when there won’t be 75 feet between us, so the whole lake will be a No Wake Zone,” Harris said.
County Attorney Janna Lindig said the court could promulgate a rule specifying the shoreline as determined by the court on a monthly basis, as it does the countywide burn ban.
“That will allow for fluctuations,” Lindig said.
Harris said he briefly considered making the entire cove a No Wake Zone, eliminating the need to consider water level changes.
“But, there aren’t people swimming out in the middle of the cove, so that isn’t addressing a safety issue,” Harris said. “I don’t know if I’m prepared to do that at this point.”
Officer Travis Reich, speaking on behalf of the SAPBF, said it would set an unfortunate precedent for the lake if the county began closing off sections of the cove.
“I’m not in favor of closing it all off right now,” Harris said.
The court approved drafting a formal resolution designating a No Wake Zone from the entrance of Plum Cove at the James Anderson Memorial Park to the County Park, from the water’s edge to 75 feet, which will be sent to Texas Parks and Wildlife. The resolution is expected to be placed on the Aug. 8 agenda for adoption.