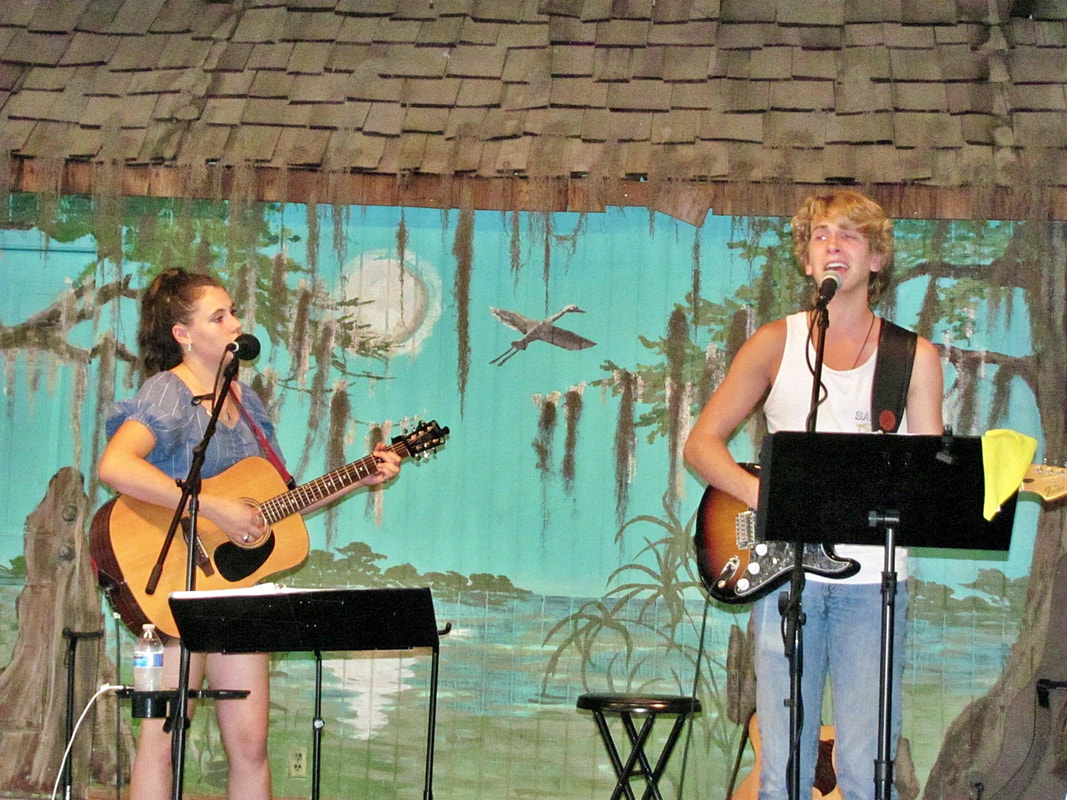 Amber Bormann and Noah Nilsson, of Geneva School of Boerne, provides musical entertainment for the crowds at the Back to School Bash in Lakehills on Aug. 4.

Musicians at the Bash

The Back to School Bash, held at the Lakehills Civic Center on Aug. 4, was hugely successful. Cars filled the grounds, two adjoining fields and lined PR 37 on both sides.
The space inside the grounds was packed with kiddos, parents, grandparents and, I am sure, aunts and uncles.
I was most amazed that the powers that be provided musical entertainment for the hoards of people attending. The two young musicians were quite gifted and I learned they were Noah Nilsson and Amber Bormann, both of Geneva School of Boerne. They were performing pro bono and when asked for a comment, Noah said, “I love music!”
Nilsson is a senior at Geneva School. Bormann graduated this year and said she is headed to Southern Methodist University this fall.
Their music was so good I overheard several people expressing a desire to dance.

AMERICAN LEGION
The American Legion Post 410 is proud to announce that they have received approval to rename their street in commemoration of the 100th anniversary of the Legion. Their current address is 147 26th St. in Lakehills. Beginning next month, 26th Street will officially be Legion Drive. So, from then on their address will be 147 Legion Dr. in Lakehills.
American Legion Post 410 is selling tickets for the drawing at their Centennial Celebration Dinner on Saturday, September 14, in the Legion Hall, one ticket for $10 and three tickets for $25. Winners do not need to be present to win.
First Prize is a 2005 Volkswagen Jetta, valued at $2,000; Second Prize is an American Legion Centennial Coin Set, valued at $525; and Third Prize is a MasterCard Gift Card worth $250.
The Legion Post 410 is open to the public Fridays through Wednesdays, from 3-9 p.m., when they serve meals and provide entertainment for all ages. For information, call 830-751-3711.

LAKEHILLS LIBRARY
The Lakehills library continues “A Universe of Stories” for the kiddos. The next meeting is Wednesday, August 7, at 10:30 a.m., and the kiddos will learn all about the moon and its phases. They will create a special moon craft.
The library is located at 7200 FM 1283. For information, call 830-510-2777.

LAKE AND RIVER
On Monday, Aug. 5, our Medina Lake level was 1062.91 feet. That is down 1.29 feet, which is 97 percent capacity.
The Medina River had a flow of 33.6 cfs in Bandera, running 3.89 feet deep at the gage.
Please send your Lakehills and Pipe Creek news to me by email at vicki.george329@hotmail.com or call me at 210-563-1186 and leave a message.
Until next time, “¡Vaya con Dios!”
The Bandera Prophet is grounded on the premise that relevant news delivery is ever-evolving. Founded by newspaper veterans, the Prophet delivers up-to-date information by writers and photographers who combined have 50-plus years of experience in the field and newsroom. Completely free to readers, the Prophet is published on multiple platforms, and shared within the online community. No paywalls and no paid subscriptions
make news, sports, feature stories and more immediately available with one click of a button or one swipe on a keypad.
All content copyright property of The Bandera Prophet