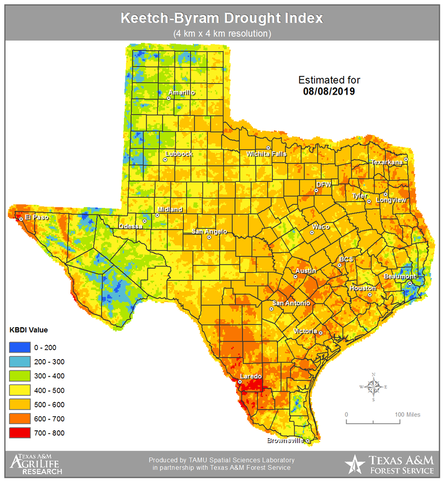 “Obviously it’s dry out there,” Bandera County Fire Marshal John Stith said.
Weeks without significant rain during the hottest part of the year has unsurprisingly created a fire hazard in the Texas Hill Country. According to the Keetch Byram Drought Index, which measures precipitation and soil moisture, Bandera County is a mixture of 500 to 600. The index has a scale of zero to 800; 800 indicates the absolute driest conditions.
“We’ve seen an increase in fires,” Stith told commissioners this morning, who advised the court to implement a countywide burn ban, which prohibits all outdoor burning for 90 days.
Stith said he’d seen eight to 10 fires in the last two weeks, including a 20-acre blaze at Camp Bullis.
“Usually when we put a burn ban on it rains,” Bandera County Judge Richard Evans quipped. “Hopefully this works.” ​
The Bandera Prophet is grounded on the premise that relevant news delivery is ever-evolving. Founded by newspaper veterans, the Prophet delivers up-to-date information by writers and photographers who combined have 50-plus years of experience in the field and newsroom. Always free to readers, the Prophet is published on multiple platforms, and shared within the online community to more than 150,000 people. No paywalls and no paid subscriptions make news and feature stories immediately available with one click of a button or one swipe on a keypad.
​
All content copyright property of The Bandera Prophet